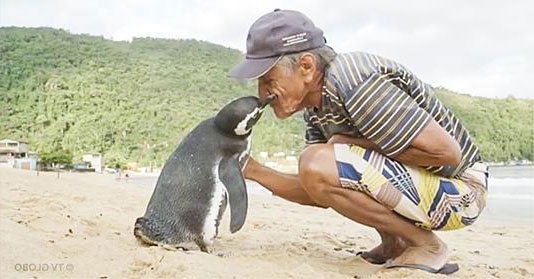 Keeping wild animals as pets is prohibited in Brazil. But this little penguin named Dindim swims 8,000 km to Brazil every year to visit the man who saved him.

It happened in 2011 when 71-year-old fisherman Joao Pereira de Souza found a dying penguin on the shore. He took him home and nursed the dying penguin back to health. He named him Dindim. Then one day the penguin swam away to an unknown destination, but he came back the following year!

The old man was surprised and touched to see his little friend again. But what’s even more incredible is that his penguin friend has been making the trip every year.

“Everyone said that he wouldn’t return anymore, but every year he comes back to see me,” Joao said.

Now, most of the year, Dindim lives with Joao in Brazil and spends the rest of the time at home near the coasts of Argentina and Chile.

“I love him like he’s my own child, and I believe that he loves me back.”

Biologists are completely awed to say the lest. They say that they’ve never seen anything like it before. The little penguin probably thinks that Joao is part of his family.