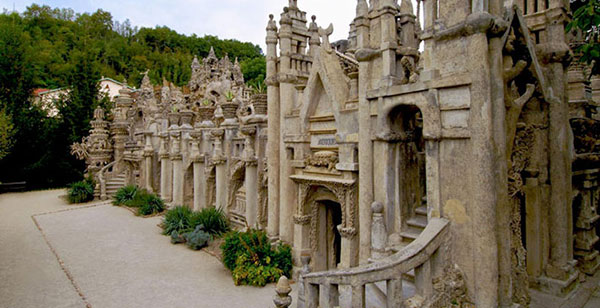 Ferdinand Cheval was a postman who can teach all of us a thing or two about making your dreams come true.

Cheval dreamed about building his own palace. One day, while delivering the post, he stumbled upon an unusual rock that fascinated him so much he decided to bring it home.

For the next 33 years, Cheval picked up interesting looking stones during his mail round. At first, he’d only pick up a few and put them in his pocket. Later on, he would use a basket and then a wheelbarrow to gather more. His dream of having a palace came back to him, and he was determined to make it a reality.

And he did. Check out his very own palace!

Le Palais idéal is regarded as an extraordinary example of naïve art architecture.

Cheval began the building in April 1879.

“I said to myself: since Nature is willing to do the sculpture, I will do the masonry and the architecture”.

He mostly worked at night by the light of an oil lamp. He bound the stones together with lime, mortar and cement. I’m blown away by the details.

The palace is a mix of various styles with inspirations from Christianity and Hinduism.

Just before his death, the postman began to receive some recognition from luminaries like Pablo Picasso and André Breton.

Cheval wanted to be buried in his palace but it is illegal in France. He proceeded to spend eight more years in the Hauterives cemetery. Cheval died on August 19, 1924, about a year after building his own mausoleum.

In 1969, the Minister of Culture, André Malraux, declared the Palais a protected cultural landmark. In 1986, Ferdinand Cheval was put on a French postage stamp.

Watch the video for an awe-inspiring virtual tour of Cheval’s palace!

I know what you’re going to ask and the answer is yes – Le Palais idéal is open to visitors every day except Christmas and New Year’s Day.