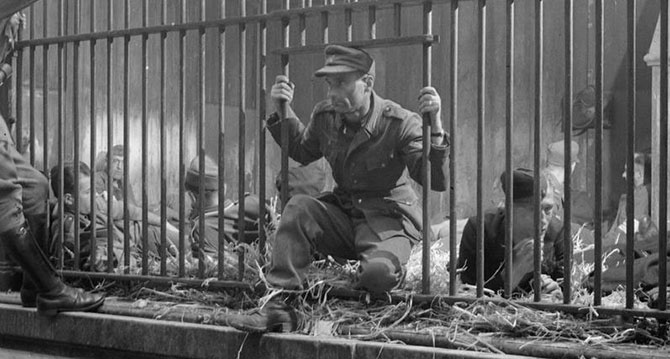 World War II was one of the darkest moments in our history. We’re forever grateful to those those amazing individuals who made tremendous sacrifices, putting themselves in danger, giving their best to fight that darkness.

Some of those amazing people were the zookeepers in the Warsaw Zoo in Poland. They saved the lives of over 200 Jews hunted by the Nazis. The images below portrayed their amazing story which is almost too amazing to believe.

Jan Zabinski and Antonina Erdman met in the 1920s while attending the Warsaw University of Life Sciences.

In 1929, Jan took over the beautiful Warsaw zoological garden on the banks of the Vistula River.

By 1937, the zoo had become a major attraction for tourists from all over Europe.

The zoo featured an incredible cast of exotic animals, all of them very well-cared for.

But it was especially well-known for its eccentric cast of elephants.

It was even the birth place of the first Polish-born elephant, Tuzinka.

The zoo had close ties to the local artist community, and was often the site of art projects and intellectual gatherings.

Jan and Antonina loved the animals so much, they would take sick ones into their home and nurse them back to health themselves.

When Germany invaded Poland in 1939, the zoo was hit by bombs, killing many of the animals.

When the bombs stopped, German soldiers invaded the city.

The animals that were left became hunting targets for Nazi officers or were killed for food by the starving residents of the city.

Still, Jan and Antonina carried on, knowing they had to do what they could to help others.

Now see how they fought back!

Jan and Antonina had been activists before the war, but the Nazis didn’t know this when they appointed Jan superintendent of Warsaw’s public parks under the occupation. It was from this position that Jan realized how he could help the city’s Jews, who were starving and dying in the ghettos.

Jan convinced the Nazi leadership that as superintendent, he would require access to the city’s Jewish ghettos to take care of the gardens there.

He began breeding pigs in the abandoned zoo facilities and would then smuggle the meat into the ghettos. He also provided people with false documents, allowing them to escape.

He began breeding pigs in the abandoned zoo facilities and would then smuggle the meat into the ghettos. He also provided people with false documents, allowing them to escape.

Refugees would hide in the cages until they could arrange for safe passage out of the city.

They also hid people in their own home. It didn’t matter if they were old friends or complete strangers.

If danger was approaching, Antonina would start playing “Go, go to Crete!” on the piano.

That was the signal that everyone in her home needed to hide immediately.

This is the basement where hundreds of Jews were hidden. Today, it’s maintained as a museum to honor their memory.

All over the house are photos of the people whose lives were saved.

This continued until 1944, when Jan joined the Warsaw Ghetto Uprising and was arrested and taken to a prison camp. Antonina continued their work until the war ended.

Fortunately, Jan survived and was able to witness the reopening of the zoo in 1949.

In 1968, Jan and Antonina were both honored as “Righteous Amongst the Nations” by the state of Israel.

And had a tree planted in their honor at Yad Vashem, Israel’s holocaust memorial.

What an amazing story. It warms my heart and gives me hope to know that there are people out there who would go to such lengths and take great risks to do what’s right.

Share this incredible piece of history with your friends below!