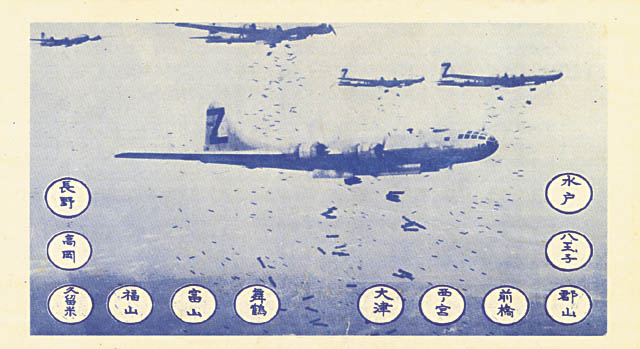 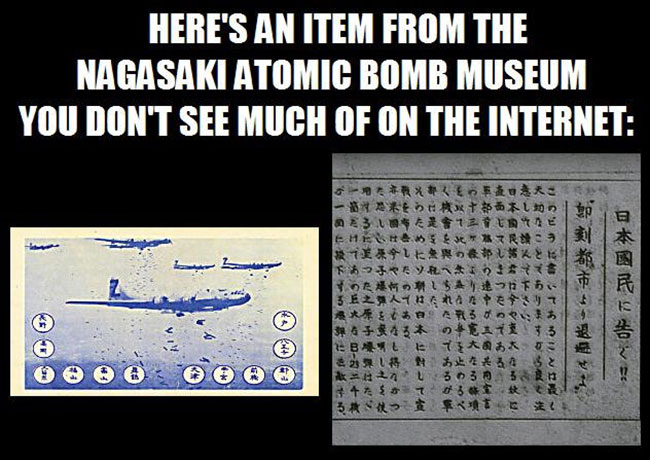 The warning message translated as follows:

“Read this carefully as it may save your life or the life of a relative or friend. In the next few days, some or all of the cities named on the reverse side will be destroyed by American bombs.

These cities contain military installations and workshops or factories which produce military goods.

We are determined to destroy all of the tools of the military clique which they are using to prolong this useless war. But, unfortunately, bombs have no eyes.

So, in accordance with America’s humanitarian policies, the American Air Force, which does not wish to injure innocent people, now gives you warning to evacuate the cities named and save your lives.

We cannot promise that only these cities will be among those attacked but some or all of them will be, so heed this warning and evacuate these cities immediately.”

Soldiers packaging up leaflets for distribution 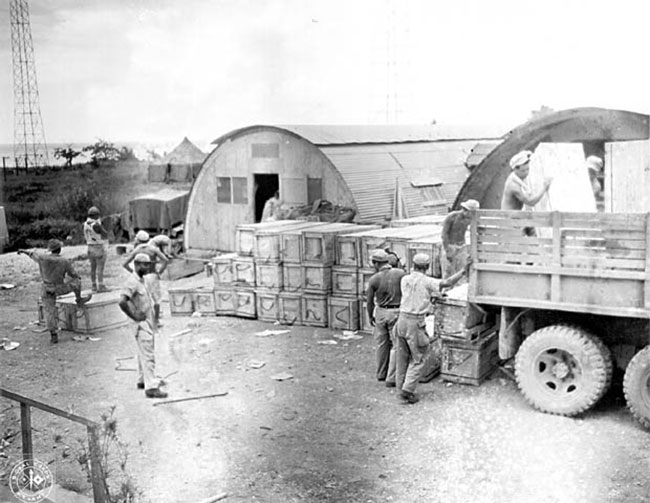 An American-controlled radio station located in Saipan was broadcasting these messages to Japanese citizens around the clock on 15-minute intervals. Five days after dropping the leaflets, the “Little Boy” atomic bomb was dropped on Hiroshima. Following the devastating bombing, the U.S. air force dropped even more leaflets warning of the oncoming another bombing.

The warning message translated as follows:

“America asks that you take immediate heed of what we say on this leaflet. We are in possession of the most destructive explosive ever devised by man. A single one of our newly developed atomic bombs is actually the equivalent in explosive power to what 2000 of our giant B-29s can carry on a single mission. This awful fact is one for you to ponder and we solemnly assure you it is grimly accurate.

We have just begun to use this weapon against your homeland. If you still have any doubt, make inquiry as to what happened to Hiroshima when just one atomic bomb fell on that city.

Before using this bomb to destroy every resource of the military by which they are prolonging this useless war, we ask that you now petition the Emperor to end the war. Our president has outlined for you the thirteen consequences of an honorable surrender. We urge that you accept these consequences and begin the work of building a new, better and peace-loving Japan.

You should take steps now to cease military resistance. Otherwise, we shall resolutely employ this bomb and all our other superior weapons to promptly and forcefully end the war.”

Three days after the first atomic bombing on Hiroshima, the “Fat Man” bomb was dropped on Nagasaki.

The dropping of these warning leaflets, along with radio broadcasts, does run counter to those who say that America didn’t care about innocent lives as a result of an atomic attack. Yet again, the never-ending debate of the necessity of the atomic bombings in Hiroshima and Nagasaki to end the war will never be resolved.