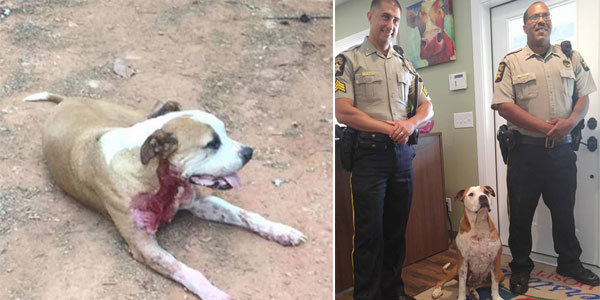 We often heard stories of dogs saving or protecting their families against intruders. It’s not everyday we hear of stray dogs saving literally the life of complete strangers. But that what happened when a stray pit bull saw a woman being attacked by a man with a knife.

Hero the pit bull was wandering around the streets of Baldwin, Georgia when he saw a man attempting to hurt a woman with a knife. The pit bull sprang into action, leaping in between the woman and her attacker, trying to save her.

The man stabbed Hero five times. Sgt. Timothy Clay and Officer Daniel Seeley arrived on the scene and found the dog laying on the ground, bleeding out. Hero didn’t look good. Aside from stab wounds, he suffered from a badly bent leg – probably from being hit by a car – and was also covered in old scars. The officers couldn’t leave him there. They look for a veterinarian.

Hero had lost so much blood that his gums were white. But he pulled through and was eventually stabilized. He recovered enough strength to make his way to Fighting for the Bullys in Tennessee.

Everyone at Fighting for the Bullys is in awe of Hero’s tenacious spirit. They all knew he was meant to live in spite of his brutal past.

Fighting for the Bullys are grateful for all the people involved in saving Hero’s life. Everyone is also grateful for Hero for saving a woman’s life – even if he didn’t know her.

Hero the pit bull nearly sacrificed his own life for a complete stranger. His story is truly an inspiration to us all.

If you are looking for an amazing dog to add to your family, Hero is still available for adoption! Just contact the amazing people behind Fighting for the Bullys.