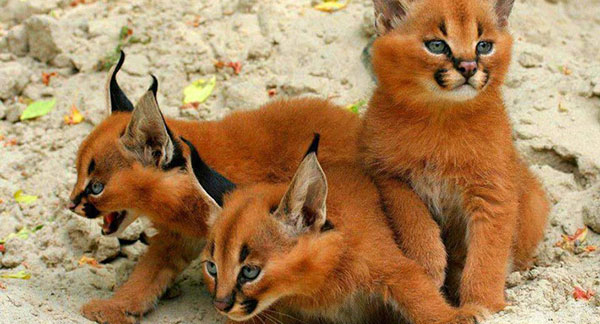 When it come to the world of wild cats, lions, tigers, and leopards tend to get most of attention. Which is a sort of a shame because there are some other cat species in the wild that are just as amazing, and even more adorable.

Today, ladies and gents, we would like to introduce to you: the caracal, a russet colored wonder with a fascinating history and absolutely stunning appearance!

While caracals are considered small cats, they’re actually quite large and can grow up to nearly 50 pounds in some cases.

Depending on their environment, caracal coats can range from pale beige to bright red or dark brown color with a reddish-orange tinge.

They are solitary animals but can sometimes be found in pairs. Their physical appearance resembles that of a desert lynx or bobcat, with their short tail and tufted ears.

They can easily climb trees, and they dig burrows when they raise their kittens until they are strong enough to venture out on their own looking.

Caracals can also be kept as pets because of their fairly good rapport with humans.

Caracals derived its named from the Turkish word “Karakulak” which means black ears. You can see why.

The can survived in the desert. They get most of their water from their prey.

Caracals mostly eat rodents and rabbits, and have a real taste for birds, just like most cats.

They are most active at dawn and at dusk, just like your own house cat.

Caracals are also used as trained hunting animals in ancient Iran and India.

They are especially effective when hunting birds because they’re exceptionally high jumpers.

These are their babies. Yeah, I know, very adorable.

Just look at these guys!

I think I just found my new favorite animal.

If you just fell in love with the caracal like many of us here at the office, please share this with your friends below!