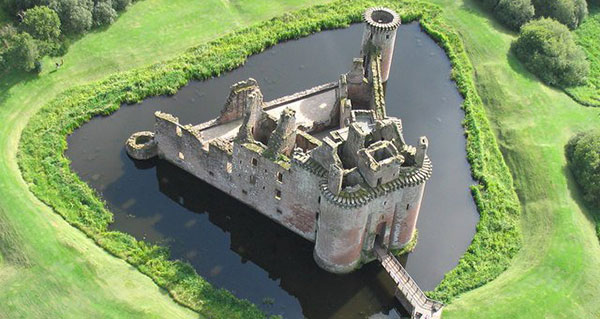 Caerlaverock Castle (Castle of the lark) is a moated triangular castle first built in the 13th century — one of Scotland’s great medieval fortresses. 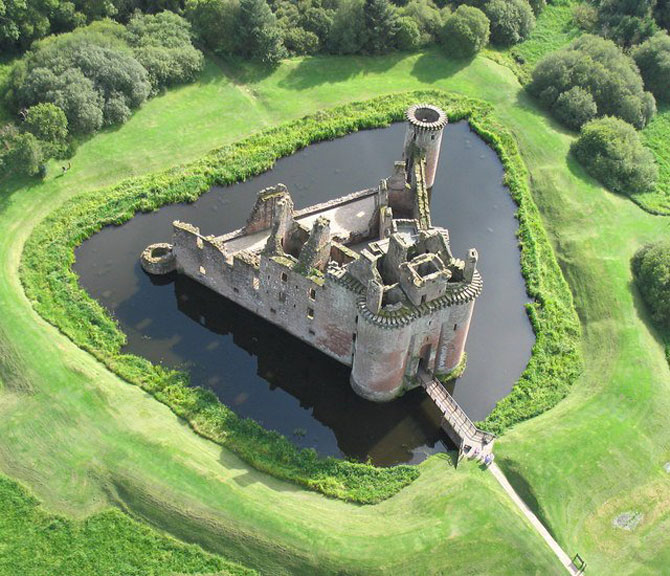 The Caerlaverock Castle is located on the southern coast of Scotland, with its imposing sandstone walls and unique triangular shape designed primarily for the defense of its realm. The castle was besieged several times most notably in 1300 by the King Edward I of England and his entire English army.

The inhabitants of the castle led by Sir Eustace Maxwell made a vigorous defense of the castle that repelled the English several times. In the end the garrison were compelled to surrender, after which it was found that only sixty men had withstood the whole English army for a considerable period. 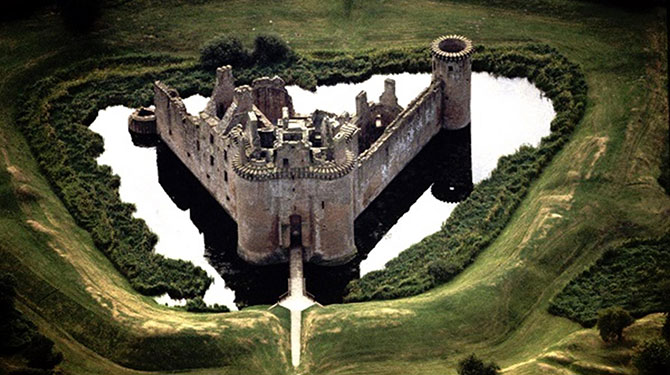 Medieval Castles like the Caerlaverock Castle were ingenious fortifications that hide secrets built right into them. There’s a reason why many medieval castles are still standing even to this day and age. These large fortresses with massive stone walls were brilliantly designed to protect their inhabitants from attacking enemies.

Take a closer look and you will see there’s a lot of thought, creativity, and planning that went into the design of Medieval Castles.

From outer walls to the specific designs of stairwells, every nook and cranny of the castle was intricately planned to provide maximum protection and security. Below are some of the unique and lesser-known secrets of Medieval Castles. 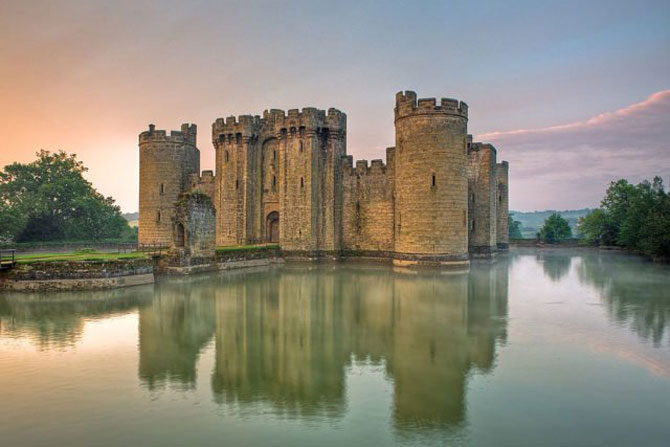 The Moat. This is a body of water surrounding a castle that is often thought by many as a water obstacle that enemies had to cross. But that wasn’t the primary function of a moat.

One of the biggest security concerns of the designers of a medieval castle was underground tunnels that enemies would dig under the fortification.

A tunnel could either provide access to the castle or could cause a collapse of the walls. The solution? Build a moat to prevent this. Digging tunnels would become impossible with all that water surrounding the castle.

Many medieval castles also built their moat on the inside between the outer wall and the inner wall.

Concentric Circles of Defense. Another extremely effective method of defense are the so-called “concentric circles”. It was designed as a series of obstacles that started on the outside of the castle and worked their way in.

An attacking army would have to figure out their way to overcome each of these obstacles one at a time. This took a lot of time and effort to do. It could also cost hundreds of lives of soldiers killed and wounded in the process. Concentric Circles of Defense was usually a progression like a cleared field, an outer wall, a moat, an inner wall, a keep and finally the stronghold tower. 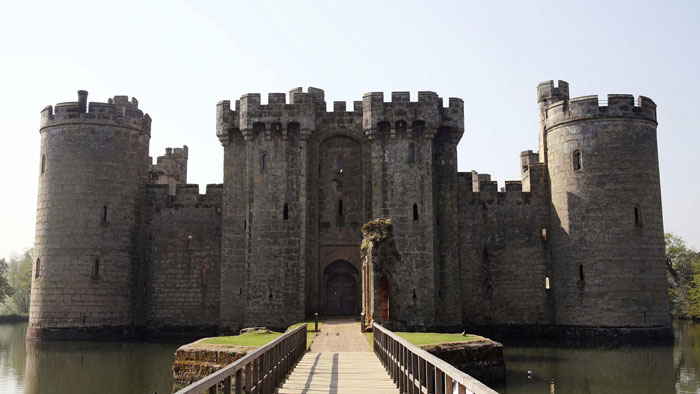 The Main Gate as a Death Trap. The most dangerous place in a medieval castle is the main gate because it was also designed as a deadly trap.

It usually opened into a small courtyard in which you will see another gate at the far end. The gates often had an iron portcullis held in the opening. If the main gate was broken through and enemies made it into the small courtyard the portcullis would be brought down, with the attackers trapped inside.

The walls of the small courtyard had death holes where the defenders of the castle could fire arrows and other means of killing the trapped enemies. 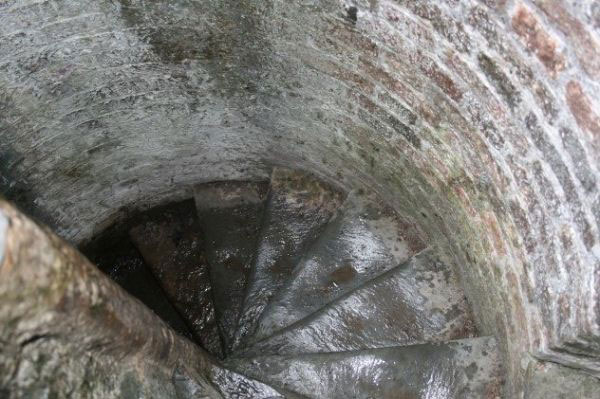 The Hidden Secrets of Stairwells. Now if the enemies were able to go this far at the stairwells, they’ll find that they were curved up to the towers often very narrowly and in a clockwise direction.

Another ingenious secret design of stairs was the very uneven steps. Some steps were tall while others were short. The defenders, being used and familiar with the uneven pattern of the stairs could move easily up and down the stairs; while the attackers, in a dimly lit stairwell and unfamiliar surroundings, would be in a frantic situation of trying to keep their balance and figuring out their way to the towers and fighting off the defenders.

This hidden secrets of stairwells would made the enemies vulnerable to attacks and at the same time slowed them down significantly. 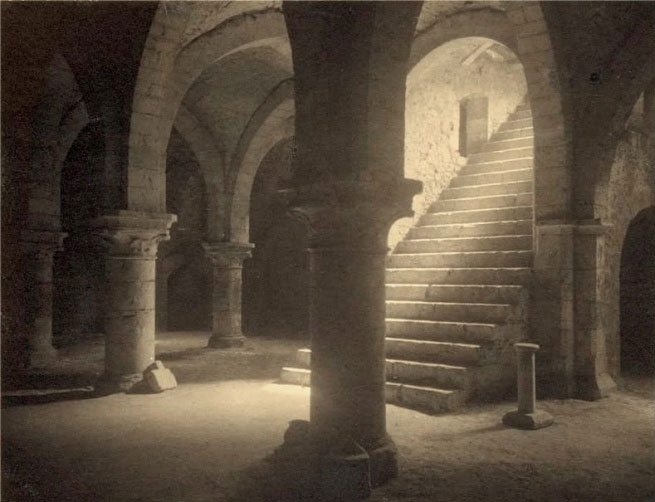 Secret Passages. Medieval Castle would not be complete without secret passages, in which there were many and each one serve variety of purposes. Some secret passages were designed to open up another secret passage for inhabitants to escape, or get supplies in and out during a siege.

Other secret passages led to secret rooms where people could hide, or where supplies were kept, and other similar purposes.

Medieval castles were more than just a large glamorous palace, but a formidable fortress intricately designed right down to the last detail with protective features to ensure maximum security of its inhabitants.

Source: Will Kalif | All Things Medieval