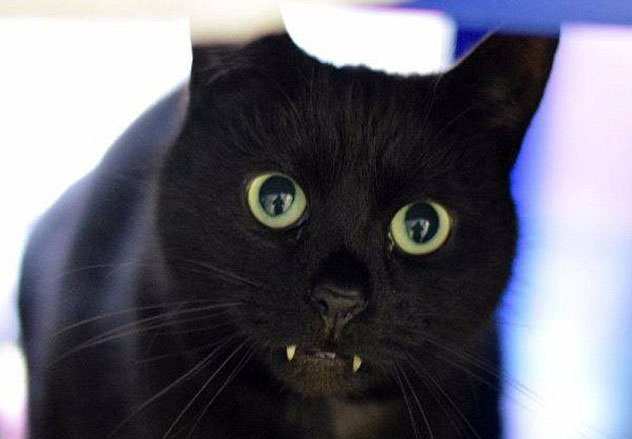 Our friendly house cats and mythical vampires have a lot in common. Both active at night, hypnotizing eyes can be , and both possess a penchant for the color black. But this particular cat is taking the “vampire” similarities up a notch, which makes a lot of people creeping out and passing him over at the shelter.

The cat’s owner dropped him off at Battersea Dogs & Cats Home after having the cat named Rory for just two weeks. He noticed that Rory needed surgery on his irregularly shaped teeth that made him hard to eat.

When Rory’s owner learned that he needed surgery due to his teeth which made his jaw not to close properly.

The medical staff performed an emergency dental work on him. The final result made him look like the famous creature of the night.

“Rory’s story is a classic example of why people should really think carefully and consider all the responsibilities of owning a cat before bringing one home,” says a Battersea official.

Rory loves tuna and is looking for loving human being who can provide him the love he deserves. Rory also prefers one that appreciates his unique look!

Now don’t you just love this face? Who wouldn’t want to bring such a beautiful creature like him home?

We definitely think that Rory’s teeth make him look even more beautiful. Share Rory the vampire cat with your family and friends who love animals. You can visit his page to adopt him!