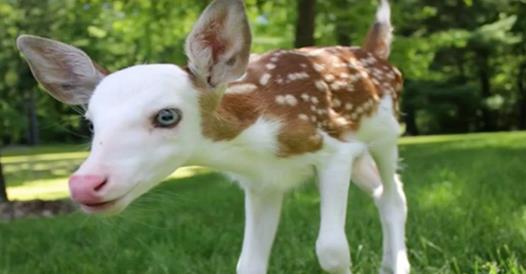 A rare white-faced fawn named Dragon was rejected by his mom at birth. With the poor fawn’s different looks (white face, blue eyes and pink nose), he would have a hard time surviving in the wild, like hiding from predators because of his white fur, or pink nose (they normally have black nose) which could get easily sunburnt. Because of his different appearance, his mother abandoned him within hours of his birth.

Thankfully, the Powell family who own the 100-acre ranch called Deer Tracks Junction in Cedar Springs, Michigan, where Dragon was found took care of him. They provided Dragon with medical care and necessary nutrients that he desperately needs. Dragon may look different than a normal deer, but he is just as beautiful! It’s sad that his mom abandoned him due to his rare appearance, but we are thankful to kind humans who give him all the care and love he needs.