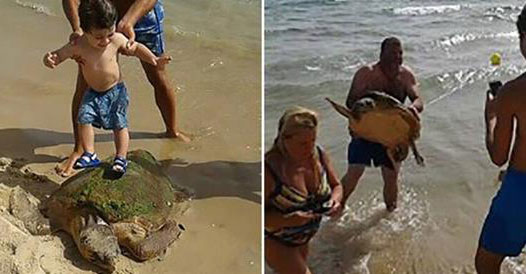 A sea turtle was seriously injured after some beach goers at Havana beach in Lebanon pull it out of the water for selfies. GreenArea International say that the some of adults involved even made kids stand on top of the turtle to take photos, even though one of the kids is upset and “was crying.”

The executive director of Animals Lebanon, Jason Mier, told The Dodo that one of the spectators claimed to have seen the turtle being hit with a stick on the beach, which left left a dent in the head of the poor animal.

When a concerned eyewitness called the GreenArea International and reported what was happening, they immediately went to the location. They rescued the turtle and handed the injured animal over to the Lebanese civil defense’s maritime center for immediate medical care.

They found the turtle was in a critical condition. The turtle had to undergo an x-ray to see the full extent of its injuries.

After administering necessary medication and antibiotics, the turtle has now been moved to a rehabilitation pool set up by Animals Lebanon. The medical staff will reassess the turtle’s condition in a few weeks.

Sea turtles play a very important role in maintaining balanced rates of jellyfish and keeping fish levels high. GreenArea International said that they are now concerned by the growing number of injured and dead turtles they find on tourist beaches.

Sea turtles regularly visit Lebanese shores during the nesting season. Hunting of turtles is banned in Lebanon. Jason Mier said that animal welfare is relatively new in Lebanon. But he is proud of how the country has progressed in recent years.