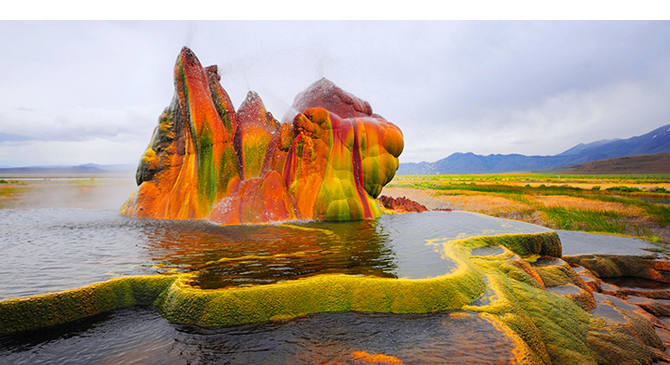 Our planet is filled with incredibly beautiful places. We discover them, explore them, marvel at their breathtaking design, and then we think “nature, you are awesome!” But apparently, and this may be hard to believe, some of the the most fascinating natural landscapes around the world are actually man-made. Take a look!

1. Fly Geyser, Nevada
Located in Washoe County, Nevada, Fly Geyser was created through accidental well drilling in 1916. The water began escaping from the drilled location in the 1960s, creating the geyser which is famous for its stunning changing colors. 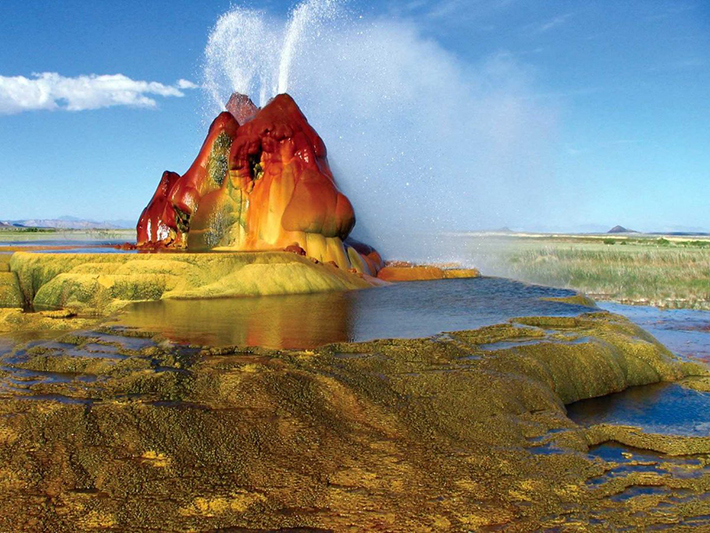 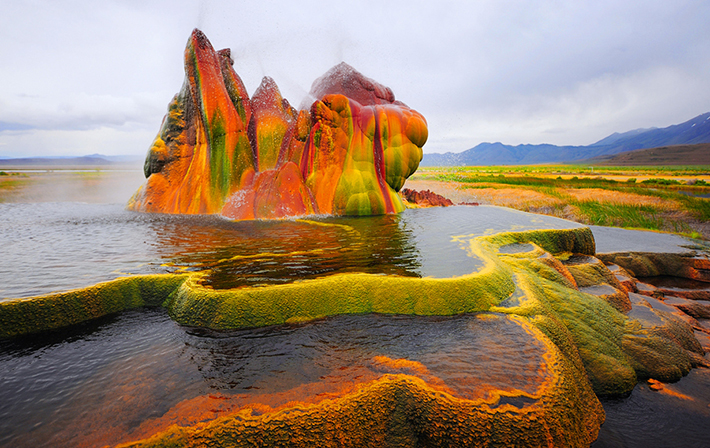 2. Door to Hell, Turkmenistan
A giant hole, known as the Door to Hell, was created when geologists drilled the site in 1971. They accidentally tapped into a cavern teeming with natural gas. Hoping that the fire would use all of the fuel that leaked (and inevitably burn out), they tried to burn off the hole. However, the Door to Hell, located in Derweze, Turkmenistanm continues to burn to this day. 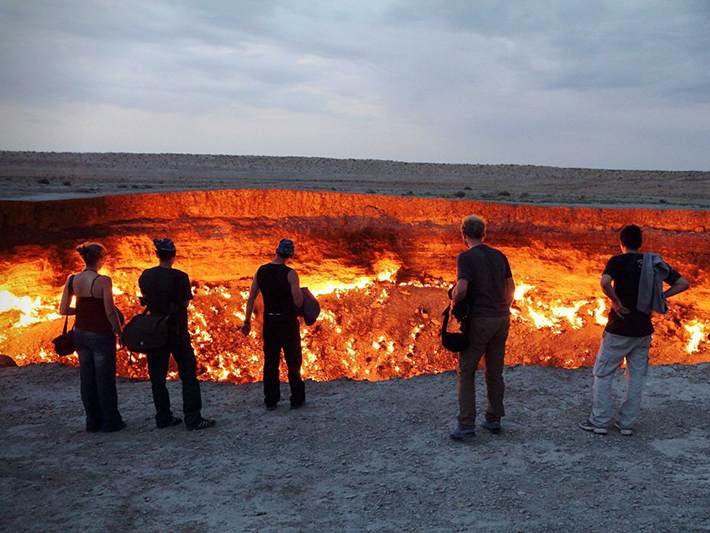 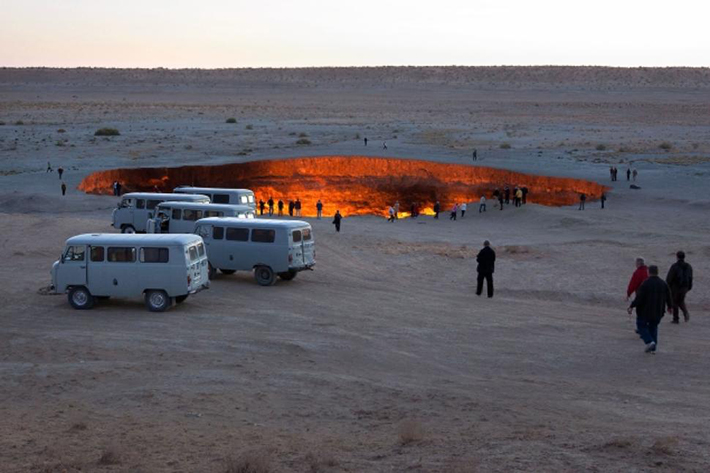 3. Lake Zahker, UAE
Lake Zahker was the result of waste water that was released onto the land before pushing up groundwater levels. This one-of-a-kind lake is located in a remote corner of the United Arab Emirates near the Oman border. 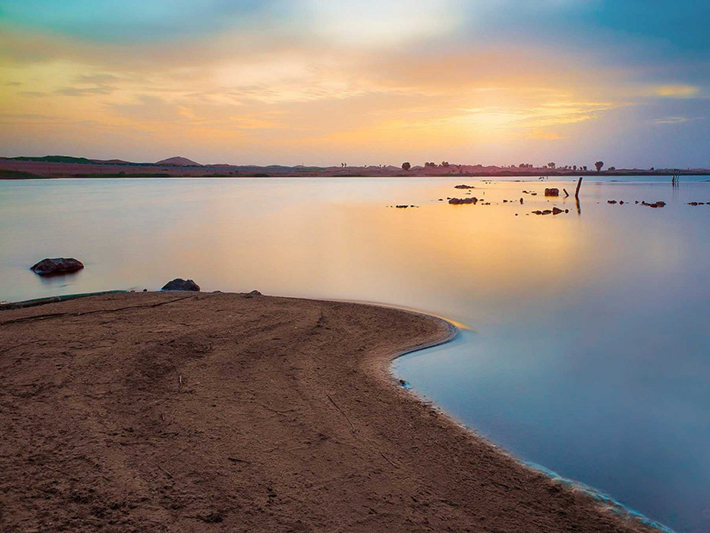 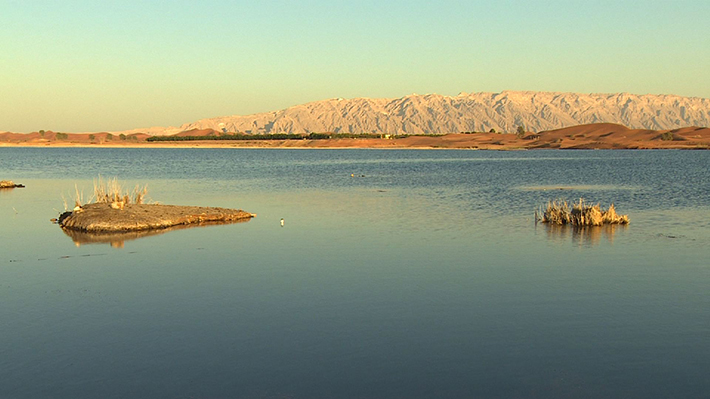 4. Providence Canyon, Georgia
Providence Canyon, also known as the “Little Grand Canyon of Georgia”, is an intricate display of massive gullies that go as deep as 150 feet. Located in Lumpkin, Georgia, the area is the result of poor farming practices during the 1800s that led to years of soil erosion, which helped form the gullies. 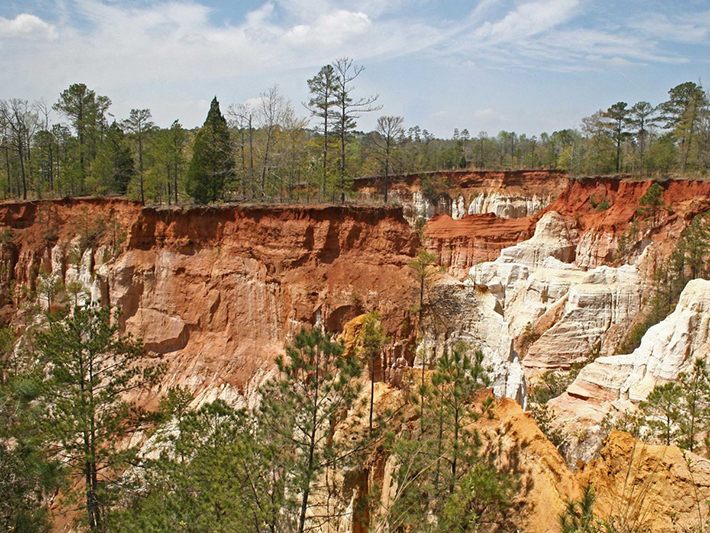 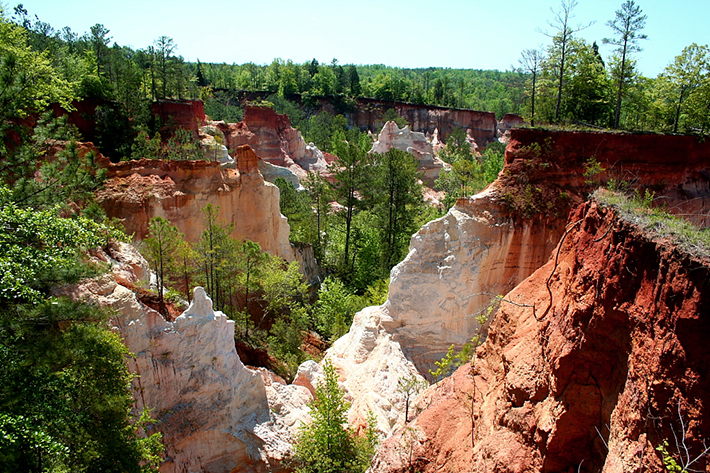 5. Analavory Geysers, Madagascar
The four geysers in Analavory, Madagascar also resulted from underground mining. “Water pipelines were laid out in the nearby aragonite mines and the water began pushing upwards where the pipes end to create the spewing geysers.” 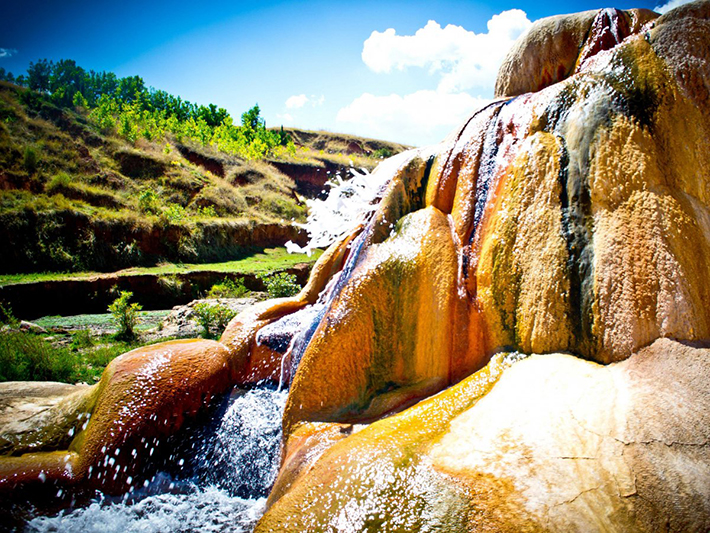 6. Blue Lagoon, Iceland
Blue Lagoon in Grindavik, Iceland, is a giant pool filled with geothermal saltwater. The lagoon was created as an over-spill from the Svartsengi geothermal power station which is located nearby. The station pumps up the water that wasn’t used to generate heat and electricity, ejecting it into the lagoon. 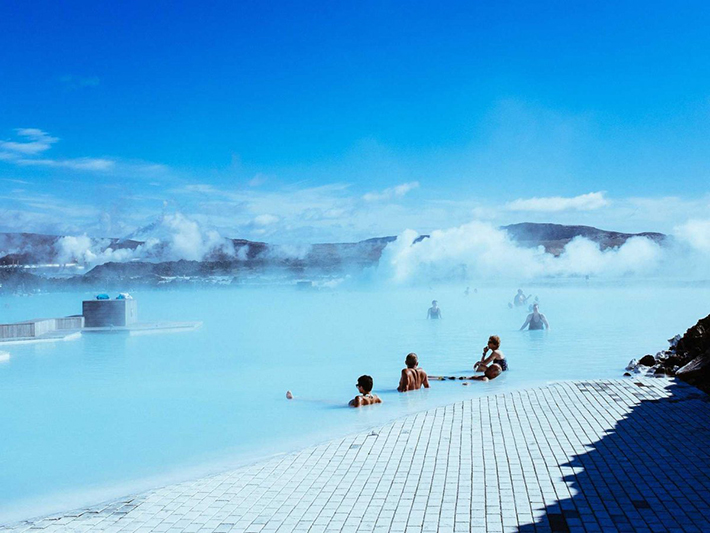 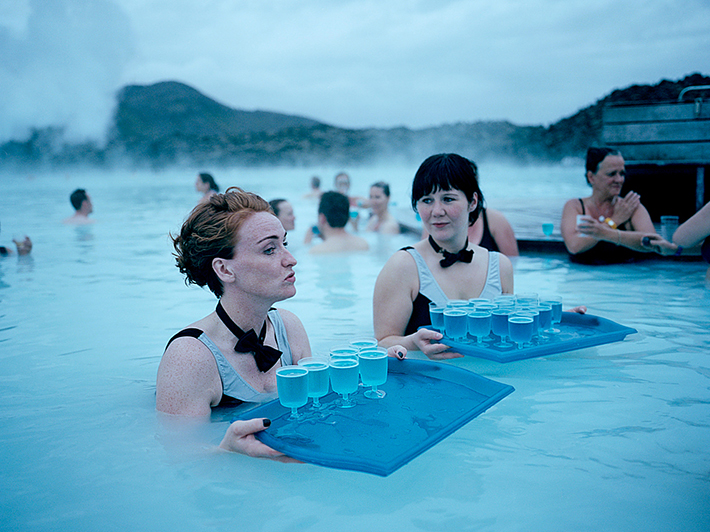 7. Abraham Lake, Canada
Stunning frozen bubbles underneath the water make Abraham Lake, in Alberta, Canada truly a sight to behold. The bubbles are made of methane gas. The gas is released by plants and animals in the artificially-created lake that resulted from the damming of the North Saskatchewan River in 1972. 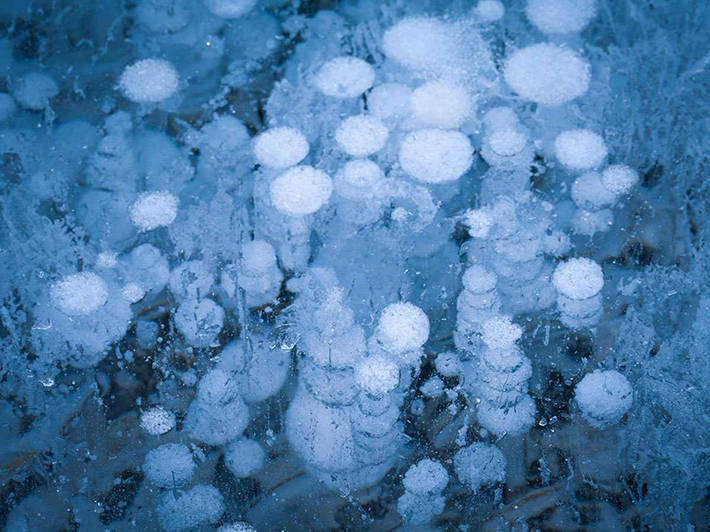 “Considering the lake was built in an area where it wouldn’t have normally been found, the increased amount of trees, grasses, and plants in the area led to a large array of the bubbles, which are starting to be looked into for industrial consumption.” 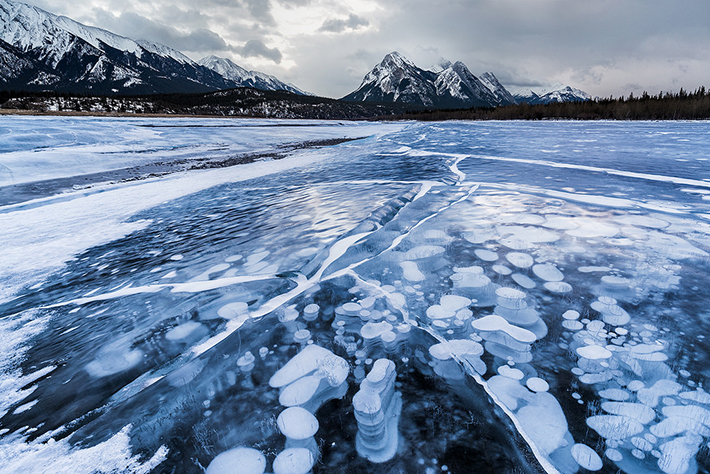 8. Geyser Park, Idaho
Located in Geyser Park, Idaho, the Soda Springs geyser shoots water over 70 feet into the air. It was discovered in 1937 when a local man was drilling for hot water in 1937 and hit a pressurized carbon dioxide chamber. Soda Springs is the only controlled geyser. It has been capped and controlled by a timer that is set to release around every hour or so. 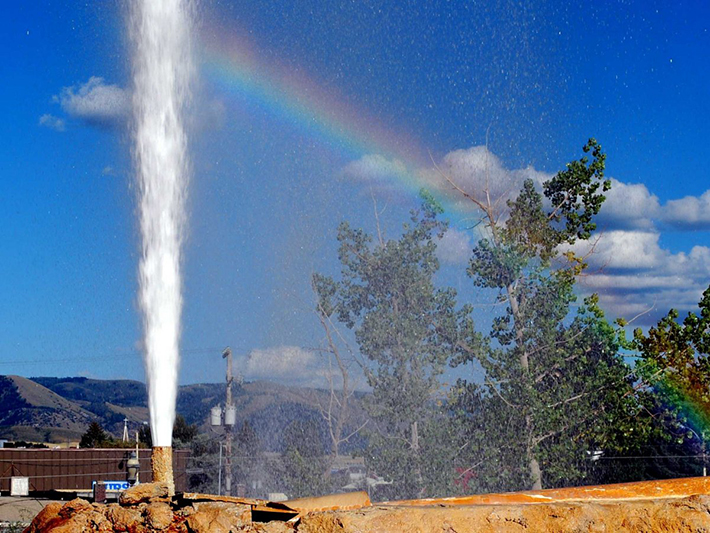 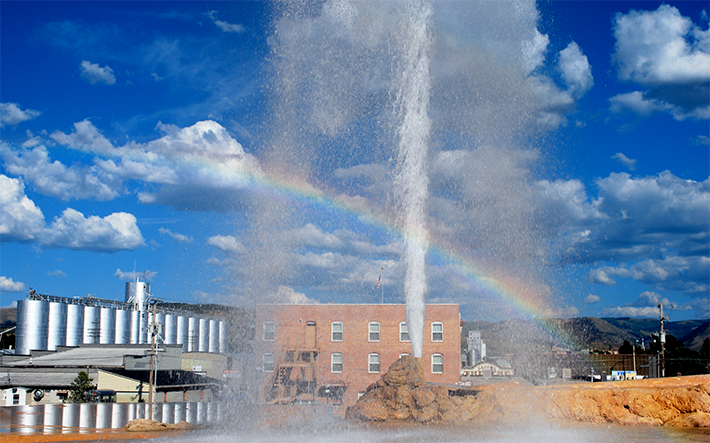 9. Lake Nasser
Known as one of the largest man-made bodies of water in the world, Lake Nasser resulted from the construction of the Aswan High Dam in the middle of the Egyptian desert in the late 1900s. 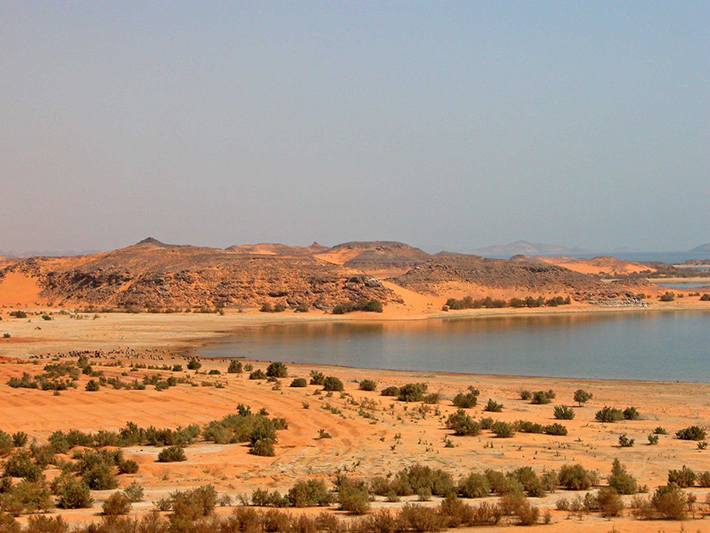