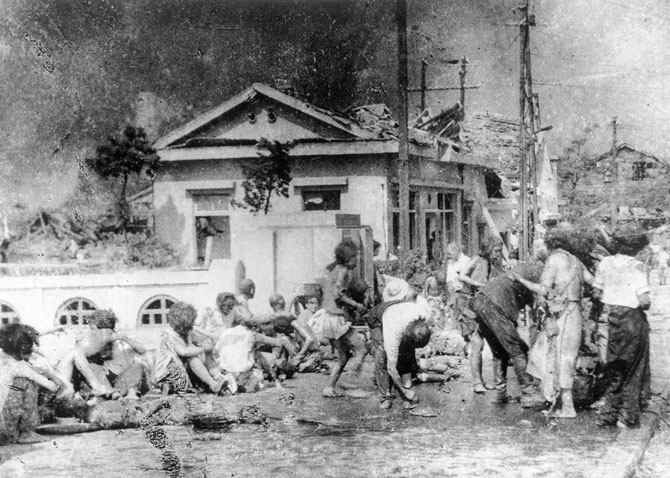 During World War II, Hiroshima was a center for both industrial and military activities. It was the headquarters of Field Marshal Shunroku Hata’s Second General Army, commanding the defense of southern Japan, and was located in Hiroshima Castle. Hata’s army consisted of about 400,000 men, most of whom were on Kyushu where an Allied invasion was correctly anticipated.

Hiroshima was a beehive of war industry, manufacturing planes, boats, bombs, rifles, and handguns, and large stockpiles of military supplies. The city was also a communications center, a key port for shipping and an assembly area for troops. At the time of the atomic bombing, the population of Hiroshima was approximately 340,000–350,000.

A pre-war photograph of Hiroshima’s vibrant downtown shopping district near the center of town, facing east. Only rubble and a few utility poles remained after the nuclear explosion and resultant fires. 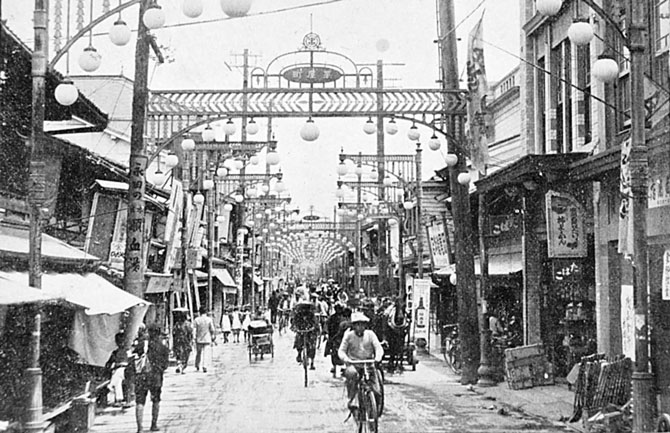 Looking upstream on the Motoyasugawa, toward the Product Exhibition Hall building (dome) in Hiroshima, before the bombing. The domed building was almost directly below the detonation, which occurred in mid-air, about 2,000 feet (600 meters) above this spot. Today, much of the building remains standing, and is known as the Atomic Bomb Dome, or the Hiroshima Peace Memorial. 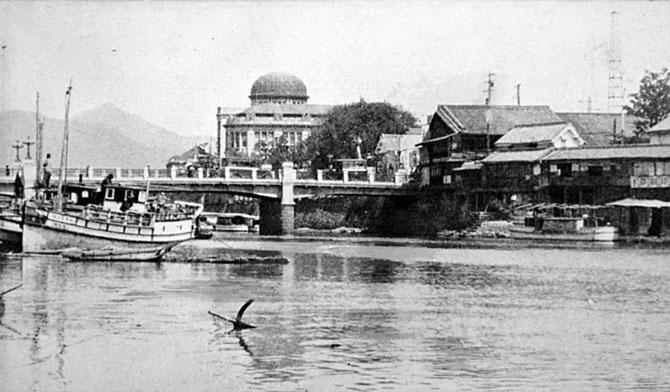 Looking northeast along Teramachi, the Street of Temples, in pre-war Hiroshima. This district was completely ruined. 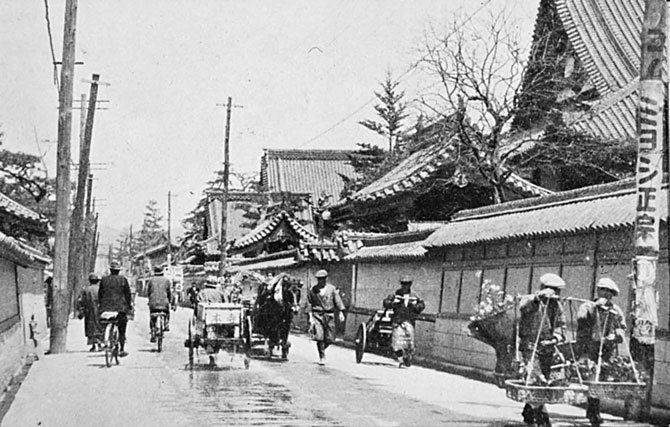 Looking north from the vicinity of the Aioi Bridge (the central T-shaped bridge targeted by the bomb). Wooden houses line the bank of the Otagawa, with traditional Japanese river boats in the foreground. 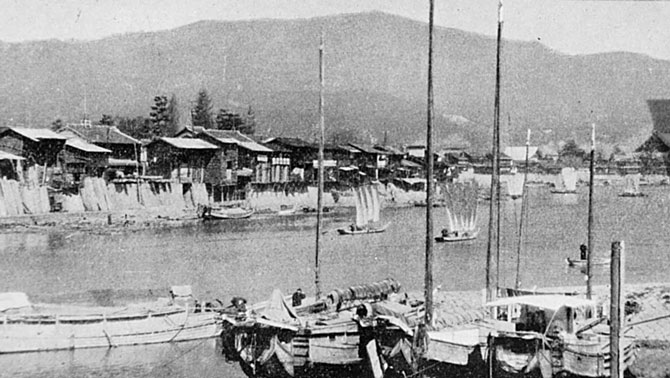 Aerial view of the densely built-up area of Hiroshima along the Motoyasugawa, looking upstream. Except for the very heavy masonry structures, the entire area was devastated. Ground zero of the atomic bomb was upper right in the photo. 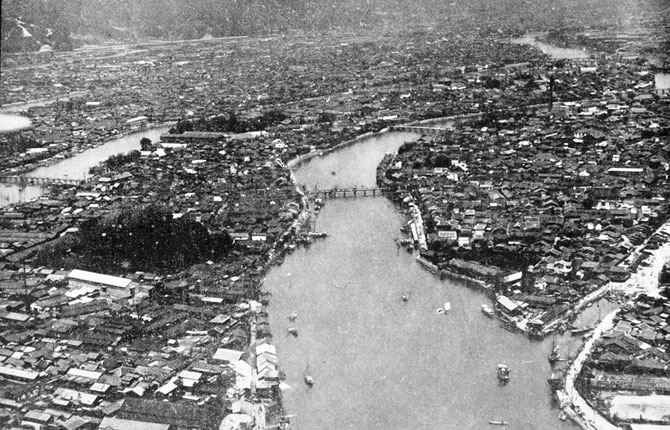 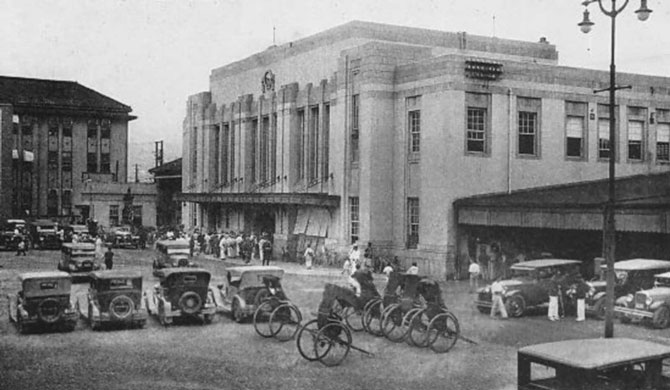 A pre-war photo of Ujina Harbor. This relatively small harbor was developed as the port for Hiroshima and was one of the principal embarkation depots for the Japanese Army during World War II. 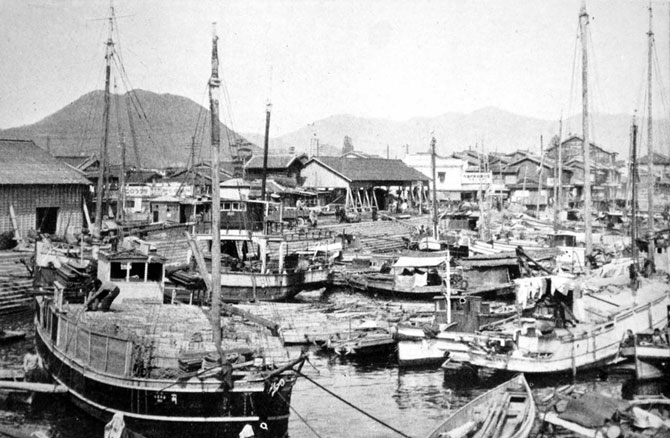 On August 6, 1945, a mushroom cloud billows into the sky about one hour after an atomic bomb was dropped by American B-29 bomber, the Enola Gay, detonating above Hiroshima, Japan. Nearly 80,000 people are believed to have been killed immediately, with possibly another 60,000 survivors dying of injuries and radiation exposure by 1950. 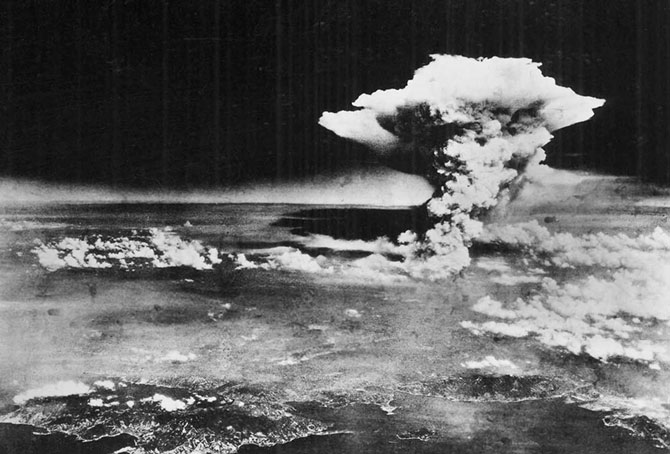 Survivors of the first atomic bomb ever used in warfare await emergency medical treatment in Hiroshima, Japan, on August 6, 1945.

Shortly after the atomic bomb was dropped over the Japanese city of Hiroshima, survivors receive emergency treatment from military medics on August 6, 1945 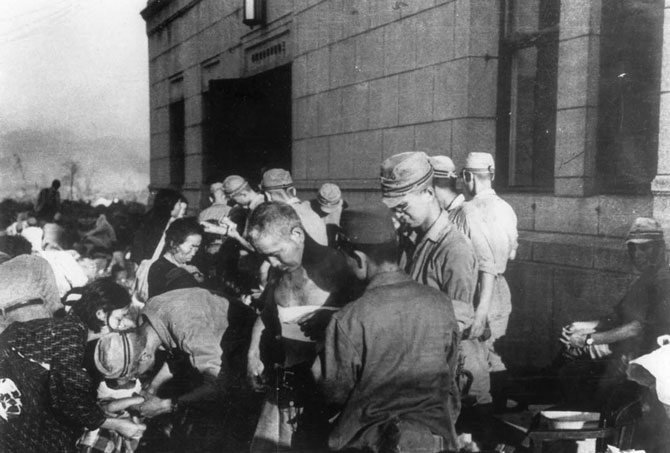 Civilians gather in front of the ruined Hiroshima Station, months after the bombing. 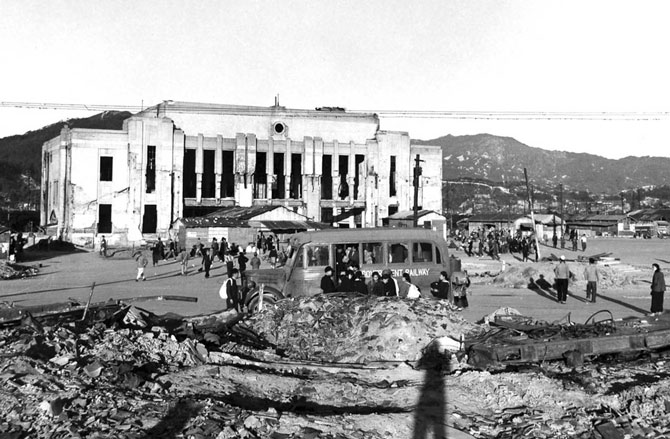 Japanese troops rest in the Hiroshima railway station after the atomic bomb explosion. 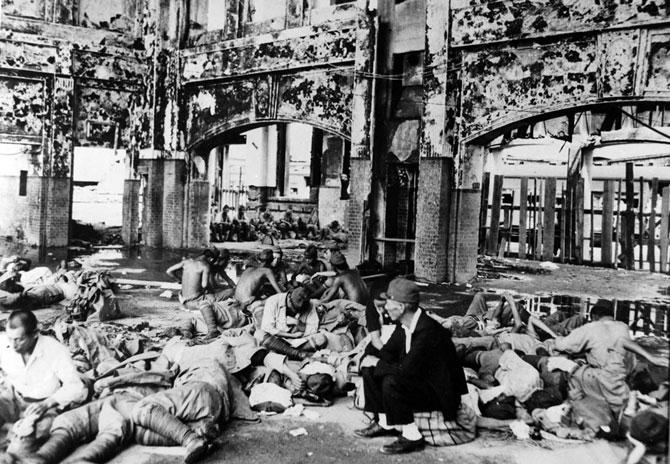 Streetcars, bicyclists, and pedestrians make their way through the wreckage of Hiroshima. 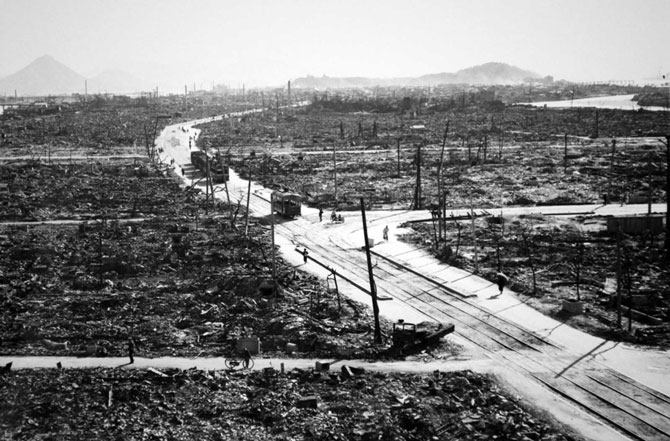 One of several Japanese fire engines transferred to Hiroshima shortly after the bombing. 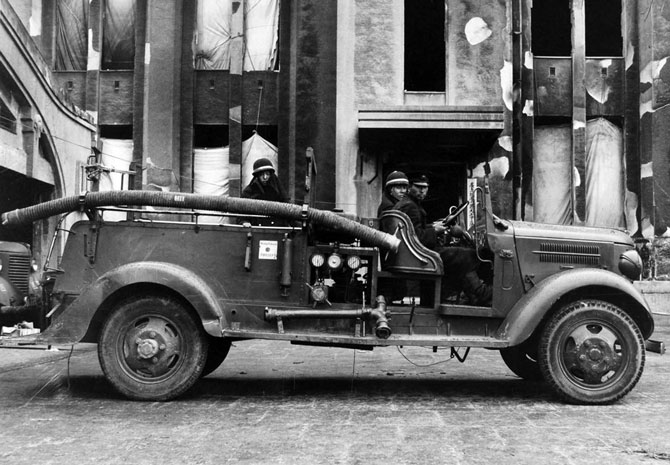 Hiroshima after the bombing. 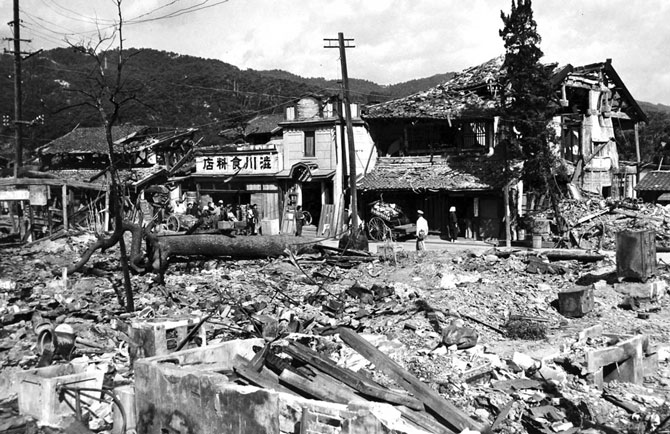 A Japanese woman and her child, casualties in the atomic bombing of Hiroshima, lie on a blanket on the floor of a damaged bank building converted into a hospital and located near the center of the devastated town, on October 6, 1945. 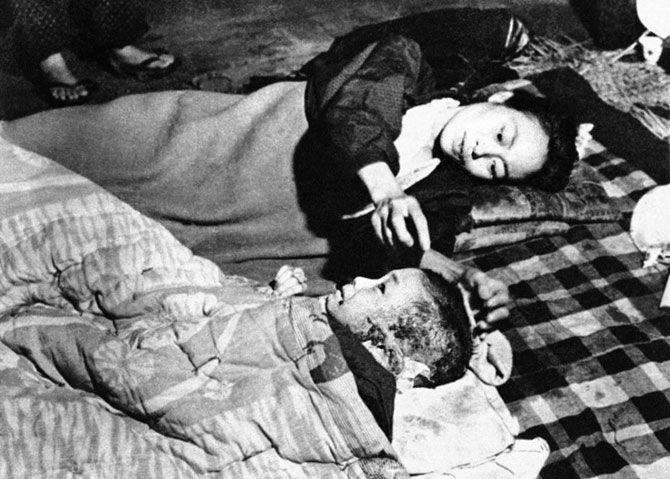 The devastated landscape of Hiroshima, months after the bombing. 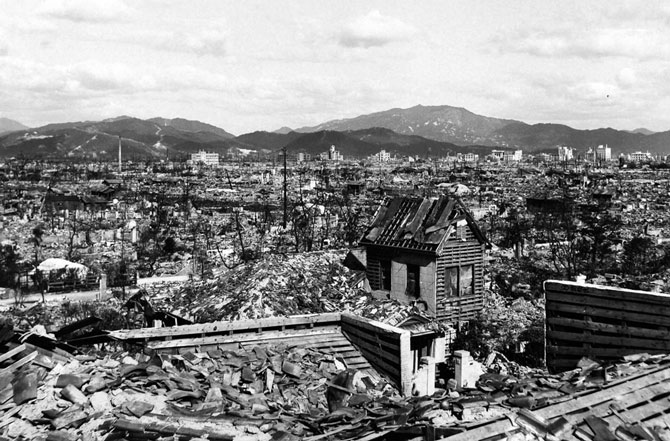 “Direction of blast” chalk marks and outlines of the feet of a victim caught in the explosion. The intense heat of the initial flash of the detonation seared every nearby surface, leaving inverted “shadows,” like those seen on this bridge left by the railings and by a person who had been standing in this place. 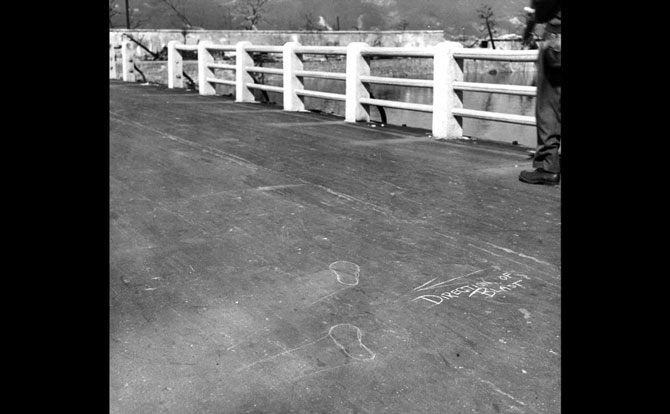 Post office savings bank, Hiroshima. Shadow of window frame left on fiberboard walls made by the flash of the detonation. October 4, 1945. 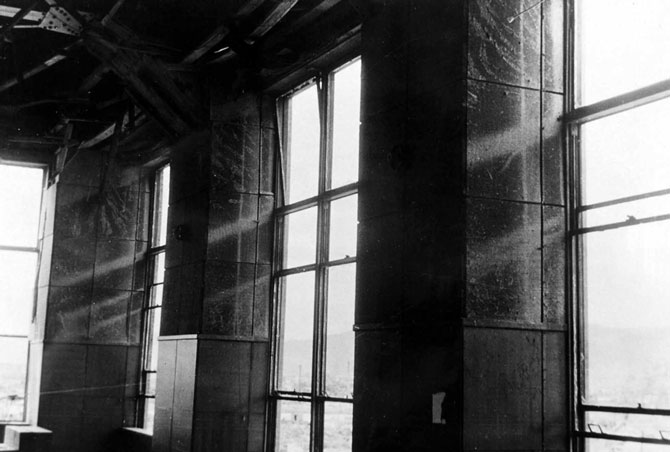 In Hiroshima, gas tanks showing shadowing effects of the flash on asphalt paint. 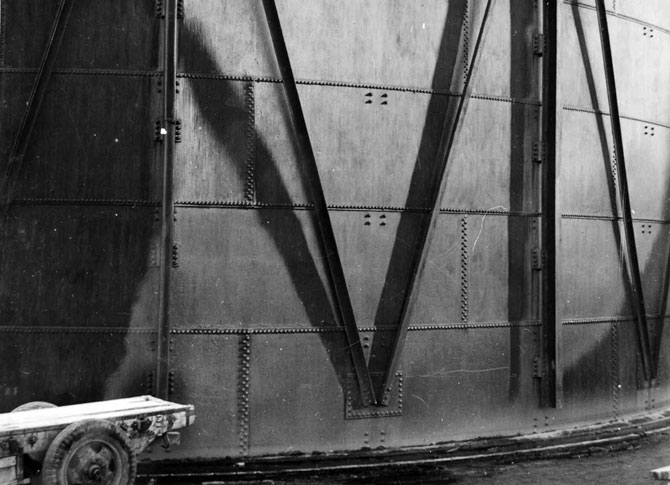 Two Japanese men sit in a makeshift office set up in a ruined building in Hiroshima. 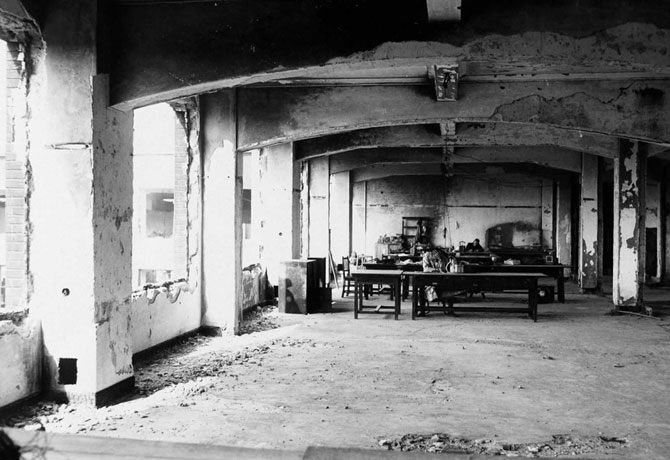 The shattered Nagarekawa Methodist Church stands amid the ruins of Hiroshima. 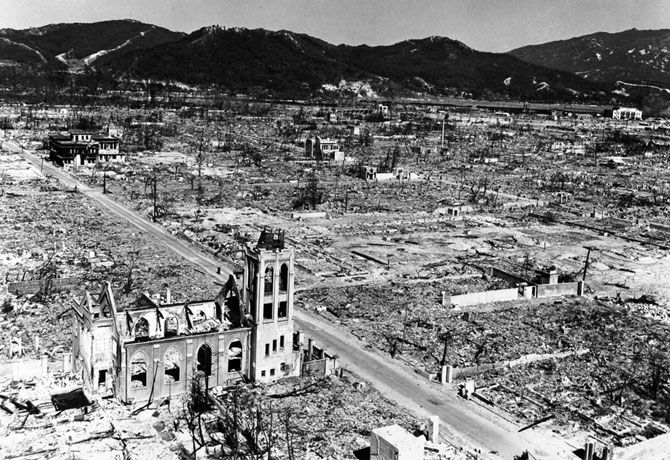 A huge expanse of ruins left after the explosion of the atomic bomb in Hiroshima. 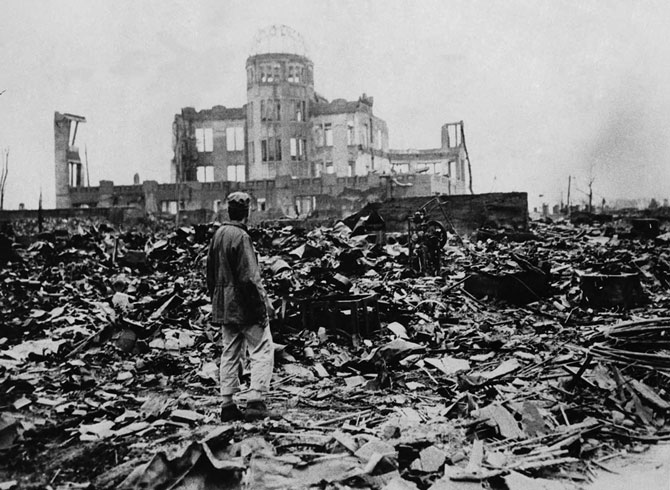 An aerial view of Hiroshima, some time after the atom bomb was dropped on this Japanese city. Compare this with pre-war photo number 5 above. 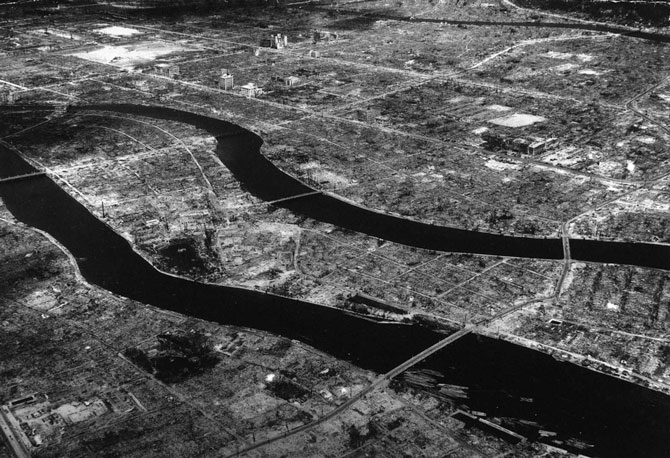 A Japanese soldier walks through a completely leveled area of Hiroshima in September 1945. 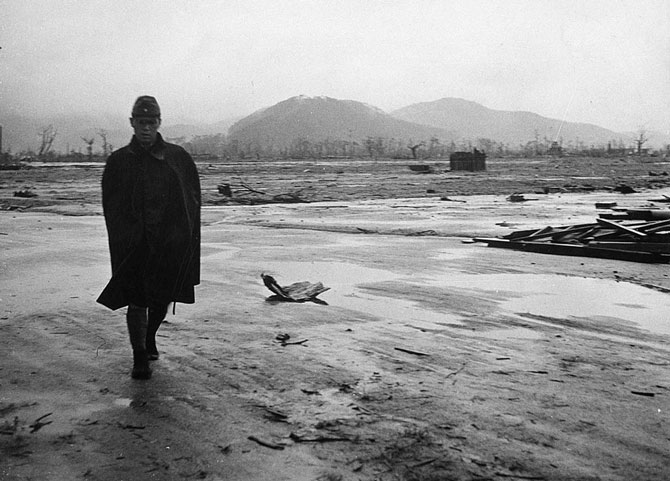