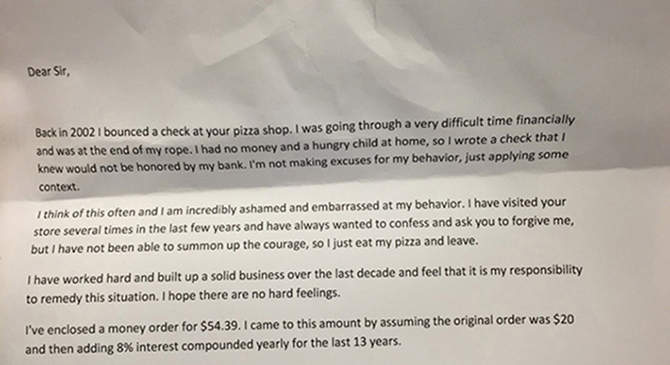 We sometimes do things to help us get through a difficult situation. Mistakes, we call them. Sometimes we (try to) forget about them, oftentimes, they follow us around like shadows.

One destitute man, for instance, had to pay with a bounced check at a pizza shop. When he eventually got back on his feet, he knew he had to make things right. So he sent this letter to the owner, 13 years after the incident. 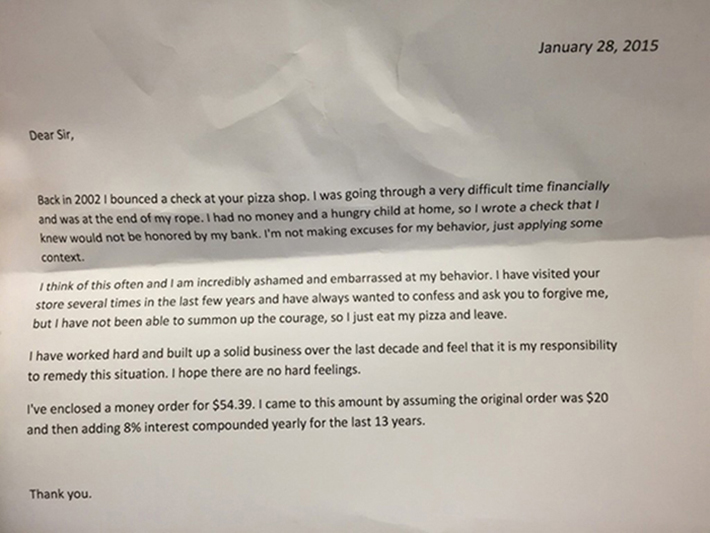 Check out these 3 incredibly inspiring stories from Reddit users that were submitted in response to the letter.

“When I worked as an assistant manager at a pizza place in NYC I had a delivery driver who would trade other guys for shifts constantly. The problem was that he always showed up smelly and disheveled.

My boss wrote him up and treated him like crap. One day I drove past the shop and noticed him pacing around the block.

After a bit of investigation I discovered that the guy actually lived in his car – he only had one uniform, and he washed it when he could. His entire life was working, pacing around the block, and catching sleep in his car when he could. Despite all of this, he never stole food or new uniforms from work, and he continued to be the best producer even though he lived in constant fear of my boss firing him.

No one had ever stopped to figure this out because he was a refugee and only spoke broken English, so it was hard to communicate.

The next night after I closed, I stole 5 new uniforms for the guy, called the Regional manager and told him the whole situation, and explained that if he wanted me to pay for the uniforms I would.

The next day when I came to work the entire corporate team was there. I had no idea what was happening, but I thought we were getting audited or something.

It turns out that the Regional Manager had moved heaven and earth to get this guy out of his car and into an apartment, to get him a new wardrobe, and to insure that my boss would never give him a hard time again.

No one ever mentioned a word about this or tried to get any recognition. The corporate folks at this particular place had all worked their way up, and lots of them were immigrants so they related to this guy on a personal level.

Nowadays I work as a programmer in a financial institution, and many of the folks I work with are privileged middle or upper middle class white folks. They’re nice people and mean well, but I constantly see that prejudice coming out where they see a person’s clothes or their haircut before they listen to their voice.

Thank you for changing some small portion of the world for the better.”

“One of my best employees over the past years has been a down on his luck guy who applied for a low level position. He came to the interview looking slightly disheveled and broken but really eager to work. Something about him or about the day that I met him just clicked with me, I just had a good feeling about him.

He ended up being one of the hardest working individuals I have ever met. I have since promoted him to the highest possible position I think he could handle physically. He is some sort of enigma or anomaly, the man works so hard to the point where, as his boss, I ask him to take some time for himself.

I am not entirely sure of what the issues he was dealing with were when I hired him all of those years ago, but i am glad I didn’t turn my back on him as others i’m sure have done when taking him at first glance.

Sometimes a man’s hands tell a story that no resume could.”

“About 10 months ago I hired an intern to work with a team on a 6 month project. He just graduated and was struggling to find a job. Everyone just kept rejecting him. He was already the butt end of jokes being told by his old professors. He didn’t have any close friends. Yeah he was weird and yeah he had no office experience, but isn’t that the point of an internship?

Best worker I could have asked for. Worked his (tail) off, put in the effort to get along and interact with everyone in the office, got great experience and was a critical part of getting the project done. Not one week after the internship ended he has a great full-time position at a prestigious institution that he is unbelievably happy with. Never stop at the first glance.”

We never really know what other people are going through, so be open to helping them. You’ll be surprised how much of an impact one kind act can do.