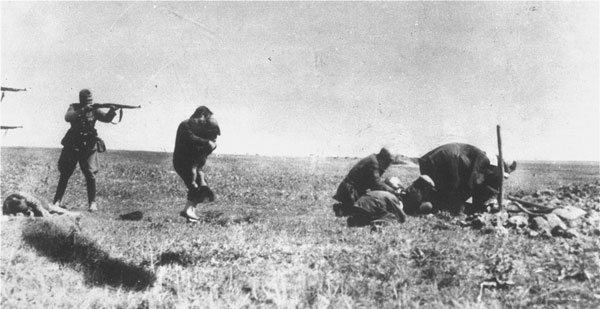 German soldier shooting a woman with a child in her arms, Ivanograd (1942) 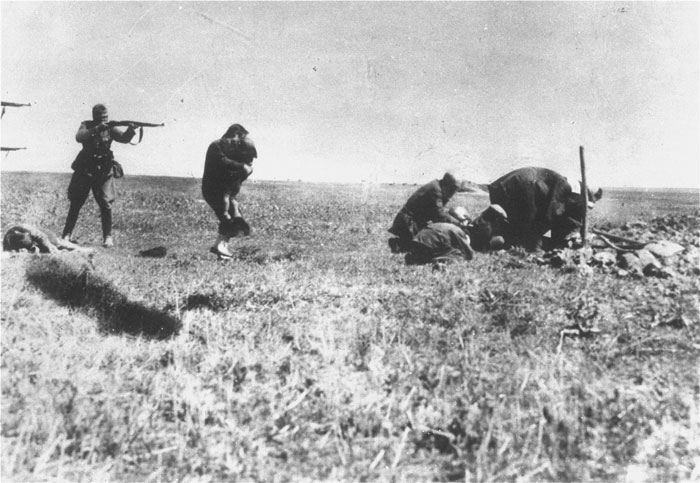 Executions of Kiev Jews by Nazi mobile killing units (Einsatzgruppen) near Ivanograd, Ukraine. The executioner in the photo appears to be standing over the body of an already executed person. You can see the gun barrels of other executioners at the left side of the photo.

The photo was mailed from the Eastern Front to Germany, but was intercepted at a Warsaw post office by a member of the Polish resistance collecting documentation on Nazi war crimes.

The original print was owned by Tadeusz Mazur and Jerzy Tomaszewski, which now resides in Historical Archives in Warsaw. The original German inscription on the back of the photograph reads: “Ukraine 1942, Jewish Action [operation], Ivanograd”.

British journalist Robert Fisk described the photo as “one of the most impressive and persuasive images of the Nazi Holocaust”. It was featured in numerous books and photo-exhibits both in Poland and Germany, as “precious and terrible evidence” of “the Nazi cruelties in Eastern Europe”.

In 1964, at the height of the Cold War, the popular German weekly Der Spiegel (Nr. 49/1964) published the photograph along with a diatribe naming several angry readers claiming it to be a fake generated by the Russians, although the most incriminating evidence came from the official German records.

Historian Janina Struk wrote that confronting a society with photographic evidence of one’s own personal experience of war is almost as old as photography itself. The historian discussed the image in her Private Pictures: A Soldiers’ Inside View of War. In extreme situations the “possession of such private pictures could lead to a court-martial”, and yet soldiers keep taking them.