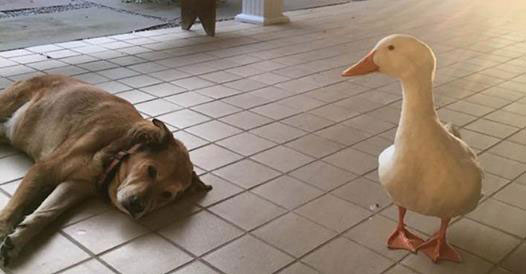 Sometimes when we’re grieving for a loved one a complete stranger comes into our life to lift our spirits when we least expect it. This is exactly what happened between a depressed dog named George and a duck nicknamed Donald.

George lost his partner, Blackie, two years ago. George and Blackie had been inseparable for 12 years. “George has been heartbroken and has grieved with anxiety so bad that he has almost died twice,” George’s human Jacquie Litton said on Facebook.

When things look so bleak, a duck appeared out of nowhere and approached George.

“We have no idea where this duck came from but he sure does love George and since the duck has arrived George has not cried one time,” Jacquie said.

“It is strange for a Duck to just appear at our house and be attached to your dog and even more strangely the anniversary week of Blackie’s passing,” she added.

Donald likes to hang out with George who also likes having Donald around.

They also love to go on walks together…

The two of them are often seen walking together with Donald quacking and George looking at him, which makes “you wonder if they’re really having a conversation.”

Just a morning stroll…..a dog and his duck

This is their favorite spot…

“We decided to put George and his duck in the kennel tonight to keep Donald safe. George gave Donald his bed…”

“I must say this Duck has found the Golden Egg because anyone who knows me knows this is one “Lucky Duck’. I will take the best of care of him… hoping that he stays around, ” Jacquie said.

Share this beautiful, heartwarming friendship with your family and friends!