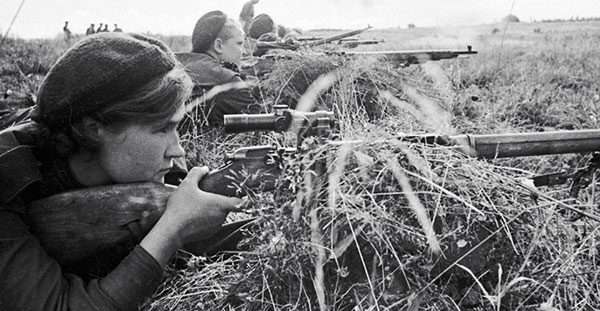 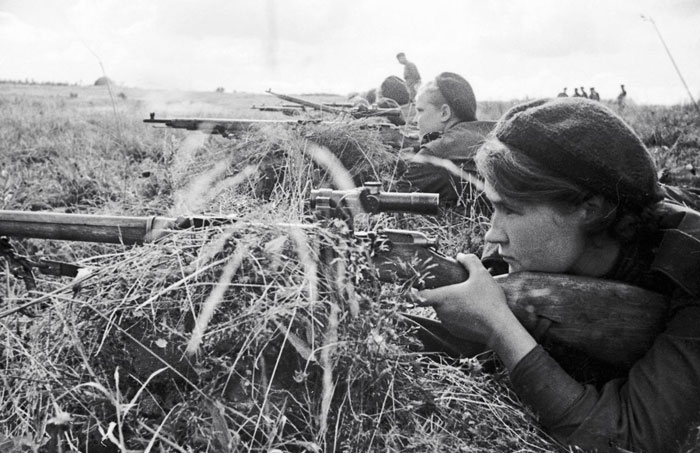 When the Nazis invaded the Soviet Union in June 1941, Soviet men and women sprang to join the army to defend their country. Most women enlisted as nurses, clerks, and cooks. Some of them trained to become deadly badass snipers.

These women, around 2000 of them, trained as sharpshooters and deployed to some of the most dangerous battlefields, lying for hours to avoid detection, await the perfect shot, and picking off their target.

War stories of their exploits were told such as the former kindergarten teacher Tanya Baramzina who recorded 16 kills on the Belorussian Front. She later parachuted behind enemy lines where she killed 20 more Nazis. She was later captured and executed. 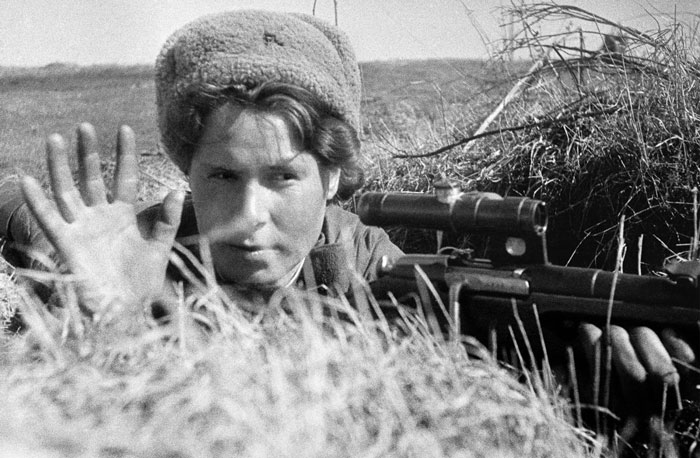 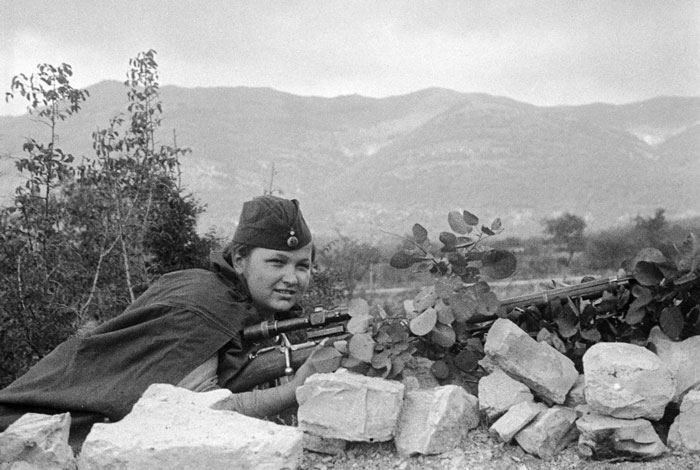 “We mowed down Hitlerites like ripe grain.” — LYUDMILA PAVLICHENKO

Red Army snipers assemble before heading to the front (1943) 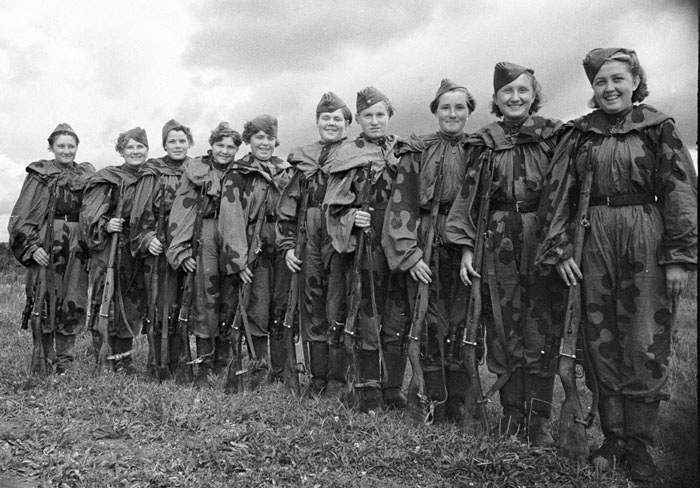 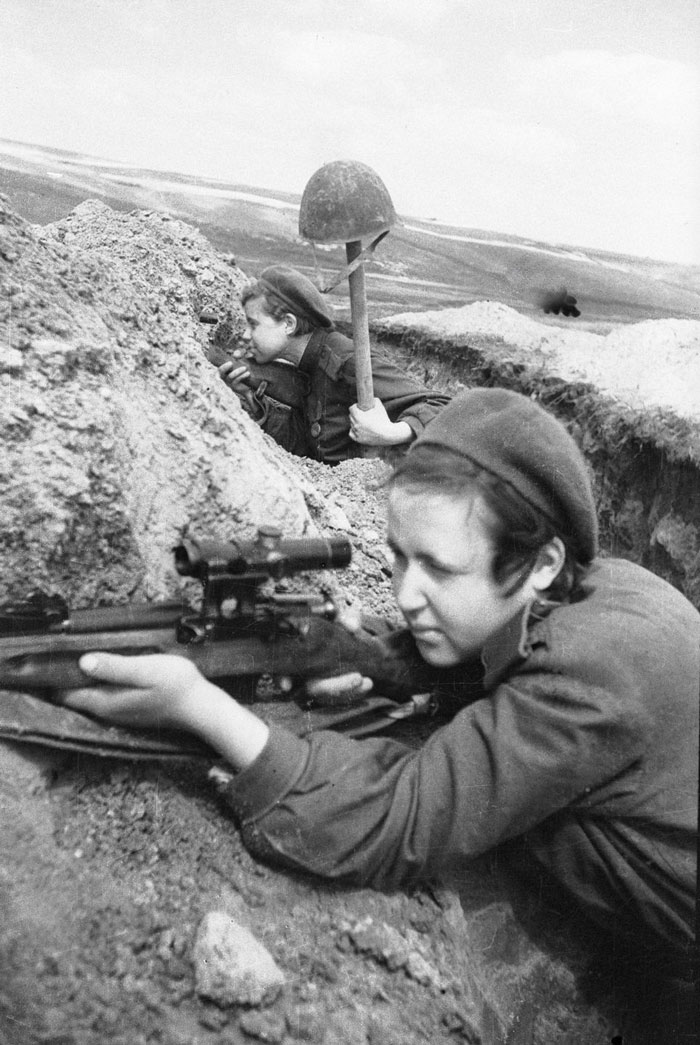 Sniper Anastasya Stepanov during the battle of Stalingrad (1942) 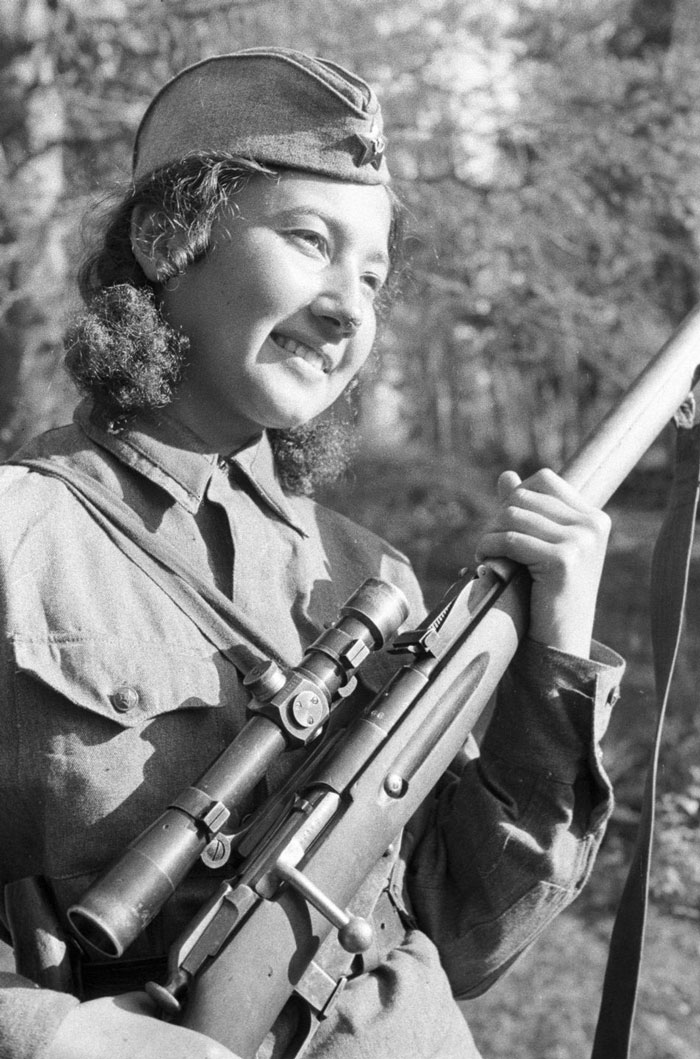 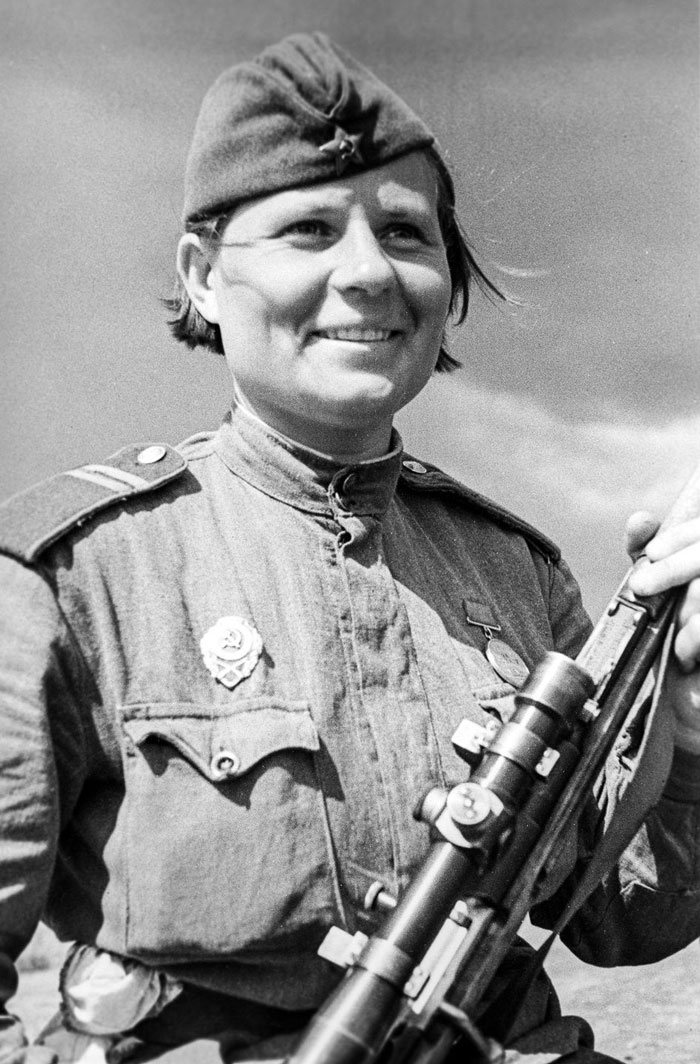 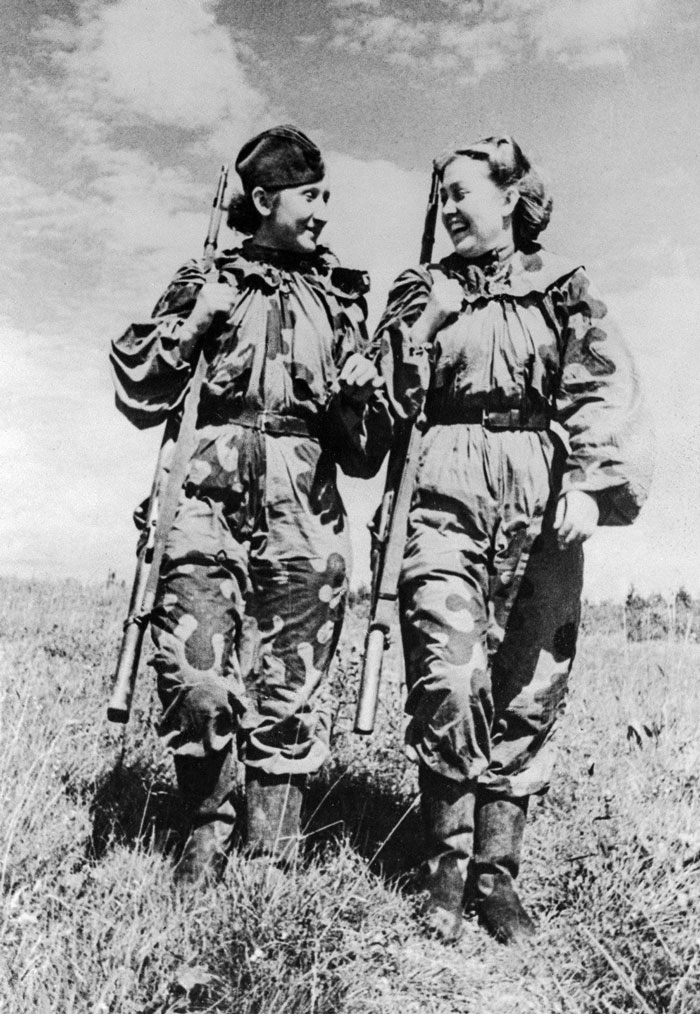 Nina Lobovskaya, commander of a company of female snipers who fought in the battle for Berlin (Dec. 31, 1944) 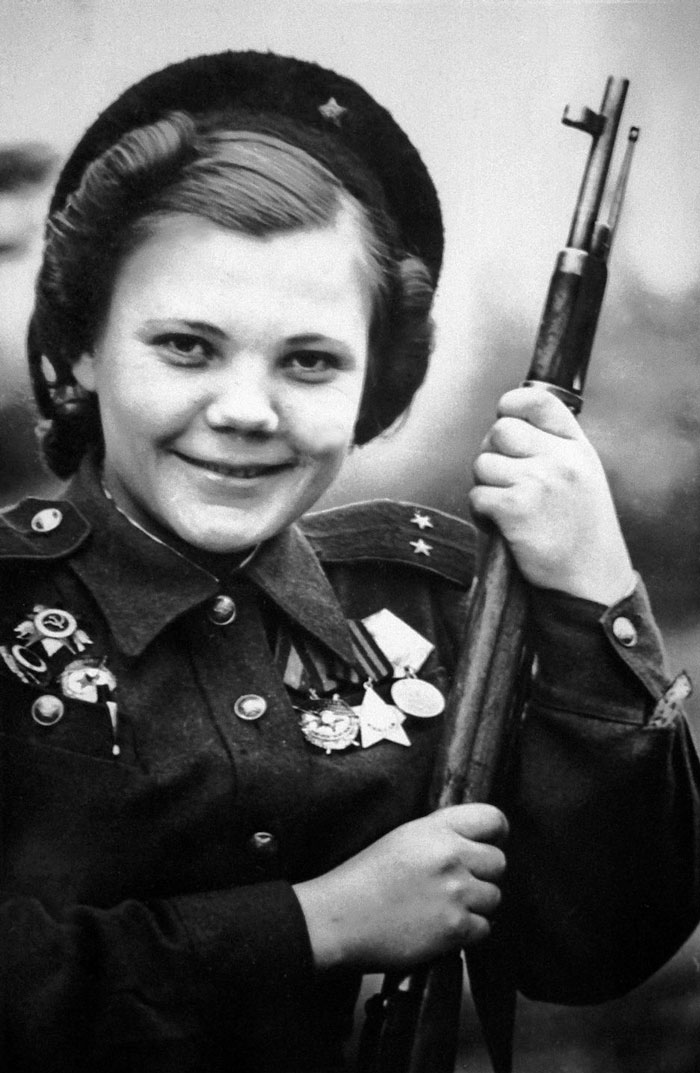 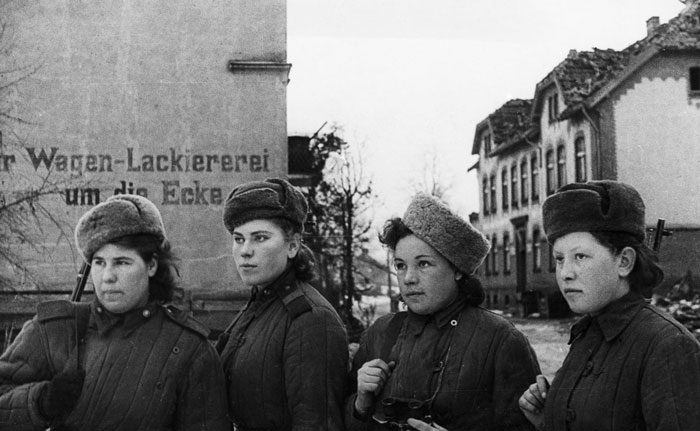 But far and away the most notorious was Lyudmila Pavlichenko, who came to earn the nickname “Lady Death.”

Born in a small village outside of Kiev, Ukraine, Pavlichenko was a driven and competitive child. After hearing a young neighbor boast of his prowess at the shooting range, she began practicing with a rifle.

She was studying for a master’s degree in history at Kiev University when the Germans invaded, and she immediately volunteered. Though recruiters tried to steer her toward becoming a nurse, she insisted she be given a combat role.

Stationed on a hill the Red Army was defending, she was handed a rifle and given an audition — take out two distant Romanians who were working with the Germans. She picked them off with ease, and was quickly enlisted in the 25th Chapayev Rifle Division.

Lyudmila Pavlichenko in combat at Sevastopol. With 309 confirmed kills, she is one the deadliest snipers in history. (June 6, 1942) 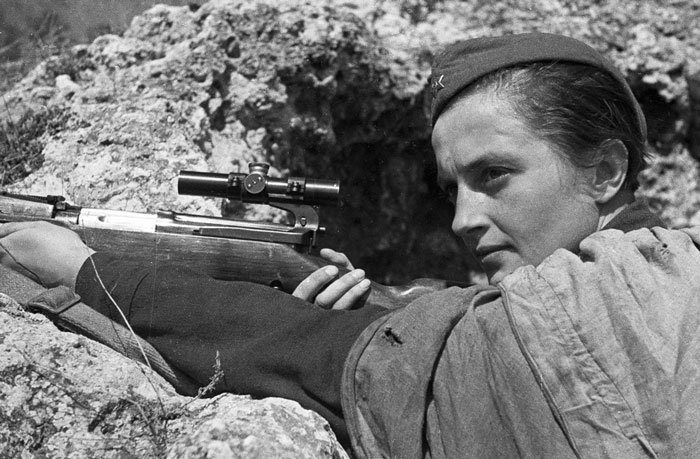 Pavlichenko fought in Odessa and Moldavia for a couple months before her unit was redeployed to defend Sevastopol against a German siege.
In those months of fighting, she gained a fearsome reputation for stealth and accuracy, picking off dozens of enemy soldiers. She was given the most dangerous assignments, including countersniping — engaging enemy snipers in tense duels that could last for days.

Her notoriety grew to the point where the Germans even attempted to bribe her to defect, shouting with loudspeakers that they would give her chocolate and make her an officer.

She was wounded four times, and after taking a blast of shrapnel to the face she was pulled out of combat duty to train new snipers and engage in propaganda activities.

In less than a year of combat, she had made 309 confirmed kills, including 36 enemy snipers, making her one of the deadliest snipers in history. 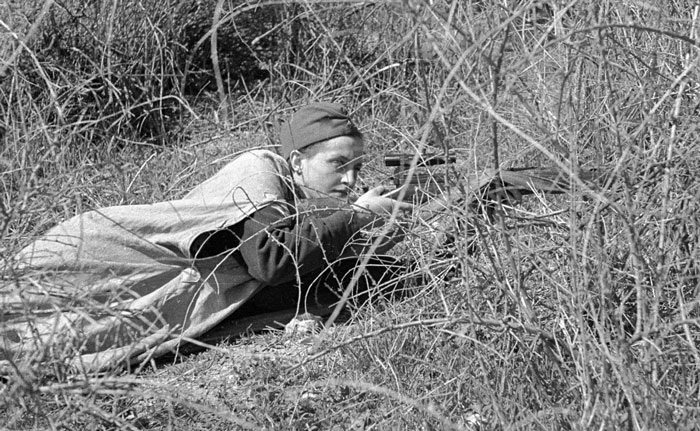 Pavlichenko during the battle for Sevastopol (June 6, 1942) 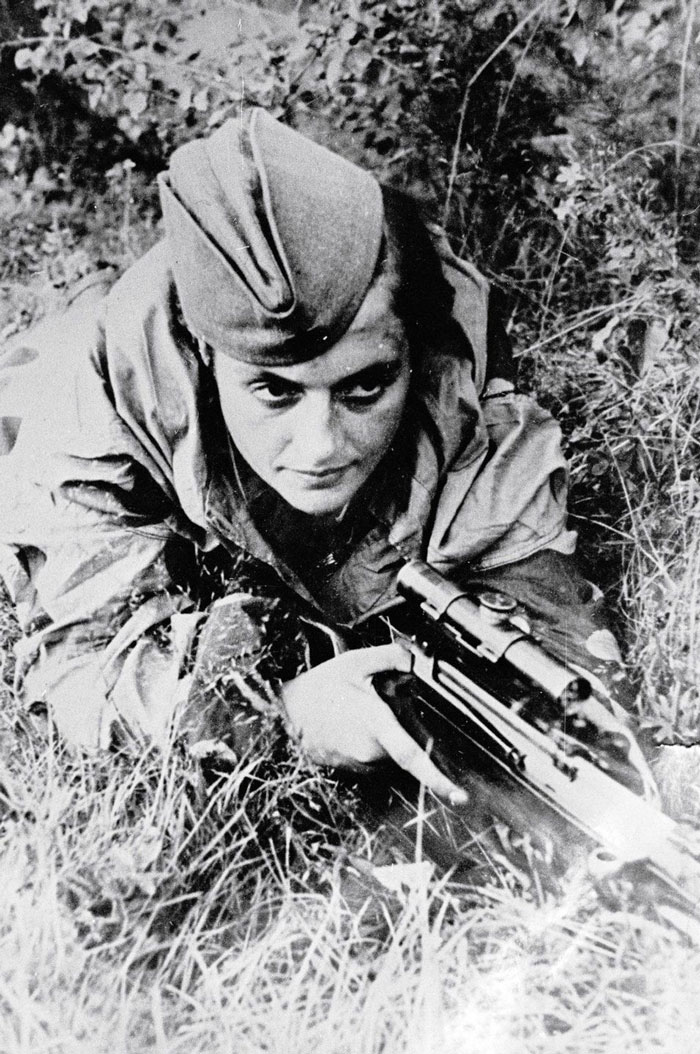 Pavlichenko was sent on a tour of the United States, Canada and Great Britain to rally Allied support of a second European front to relieve the pressure on the Soviets. While touring the United States with Eleanor Roosevelt, Pavlichenko was bombarded with absurd questions from the press about fashion, hairstyle and whether she wore makeup into battle.

She endured them at first, but as the tour progressed her patience thinned, and she began to boldly chide the Americans for their condescension.

“Gentlemen, I am 25 years old and I have killed 309 fascist occupants by now. Don’t you think, gentlemen, that you have been hiding behind my back for too long?” — LYUDMILA PAVLICHENKO, SPEECH IN CHICAGO, 1942

Pavlichenko during her visit to Washington, D.C. (1942) 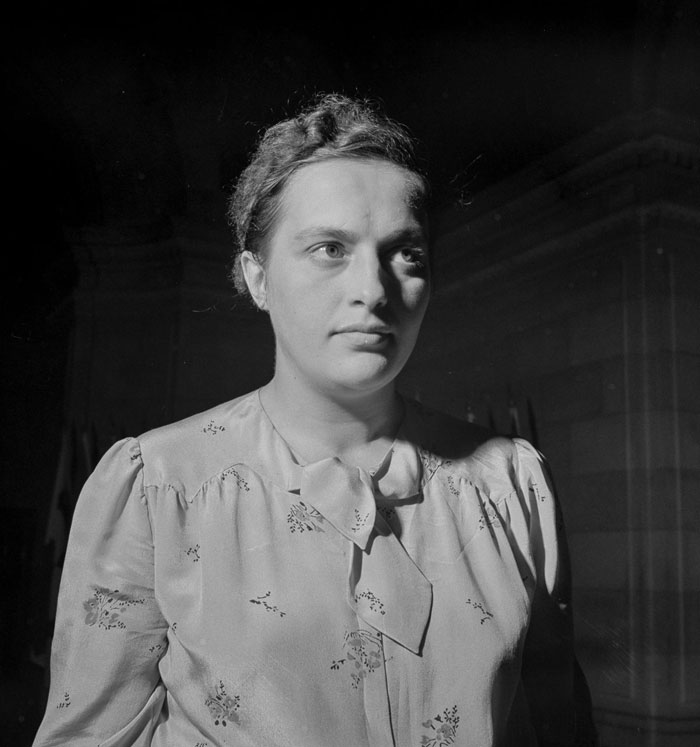 “Now I am looked upon a little as a curiosity, a subject for newspaper headlines, for anecdotes. In the Soviet Union I am looked upon as a citizen, as a fighter, as a soldier for my country.” — LYUDMILA PAVLICHENKO, 1942

Pavlichenko in Washington, D.C. with other Soviet delegates (1942) 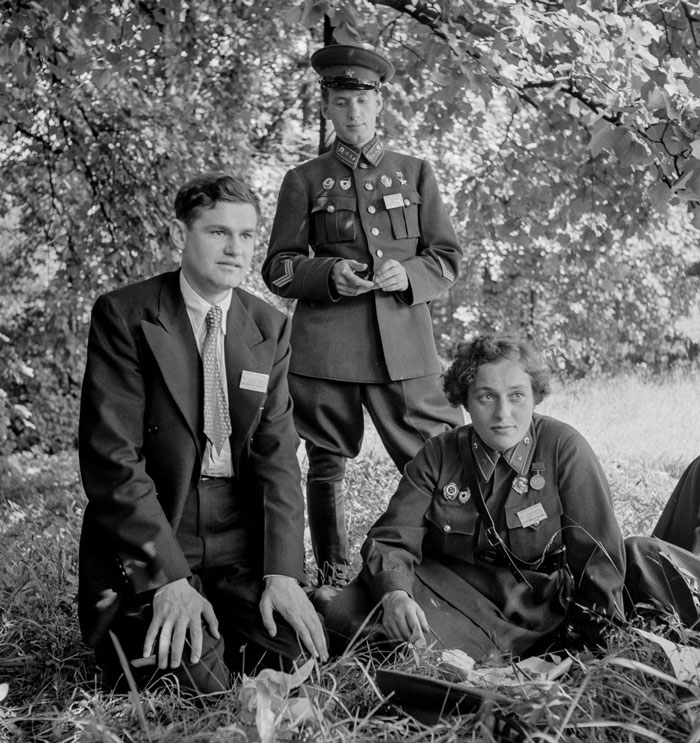 Upon returning to Russia, Pavlichenko was promoted to major and awarded the title Hero of the Soviet Union, her country’s highest honor.
She trained snipers until the end of the war, then returned to Kiev University to finish her education and become a historian. 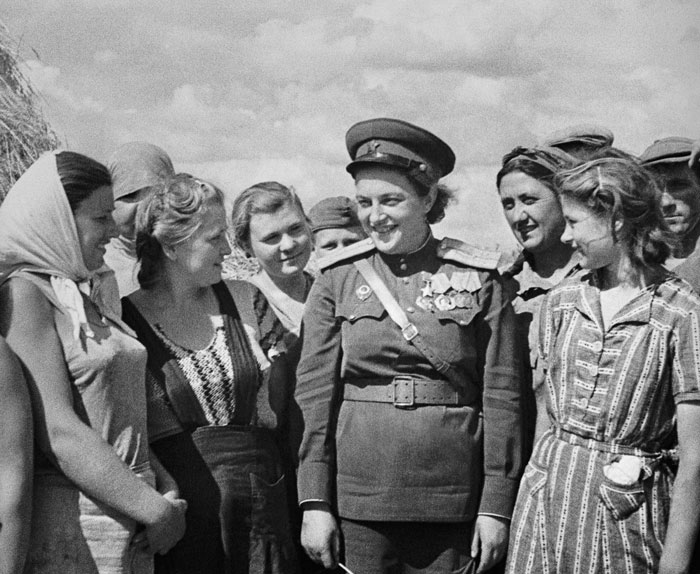