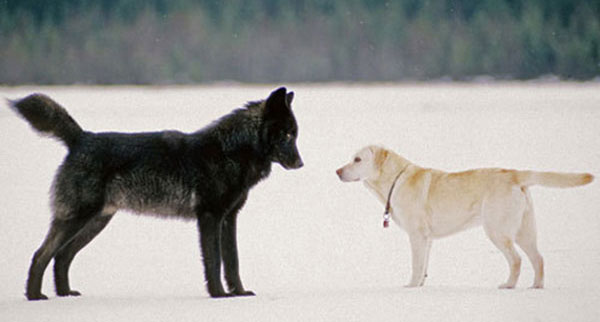 It’s one thing to have a quick encounter with a wild wolf that goes on for a matter of seconds. But this went on for years.

In 2003, wildlife photographer Nick Jans and his labrador encountered a wolf in their backyard in Juneau, Alaska. He had no idea it would be a start of a unique relationship that would defy what we know about wolves, and eventually transform an entire community.

Nick and his lab were on the back porch of their home when a wild wolf appeared. With all the excitement that followed, his dog managed to slip away, racing out to meet this big black wolf.

Nick was expecting the worst to happen. But he was stunned to see the two starting to play together. He immediately grabbed his camera and took some photos of the encounter.

The wolf seemed to crave the company of humans and their domesticated dogs. It stayed in the area for years. Since that first encounter, Nick has devoted much of his time taking pictures of the wild wolf he named Romeo.

Soon enough Romeo captured the hearts of residents in the town. He became a Juneau fixture, locally famous for playing with dogs at nearby Mendenhall Glacier Park.

But the wild wolf’s presence raised complex questions to some. But residents soon realized that Romeo just wanted to play.

He didn’t just play with dogs, but also with humans. “The wolf would bring out toys that he’d stashed,” Nick said in an interview. “One was a Styrofoam float. Romeo would pick it up and bring it to [my friend] Harry to throw. He clearly understood the same sort of behaviors that we see in dogs.”

“The amazing thing was Romeo’s understanding. It wasn’t just our understanding and tolerance. It was the combination of his and ours and the dogs’. We were these three species working out how to get along harmoniously. And we did.”

Romeo became a powerful symbol in the community and an amazing ambassador to the wild. He remained around the outskirts of Juneau for six years.

Sadly, Romeo passed away in 2010. The entire residents of Juneau held a memorial in his honor and had this special plaque made for the magnificent wolf.