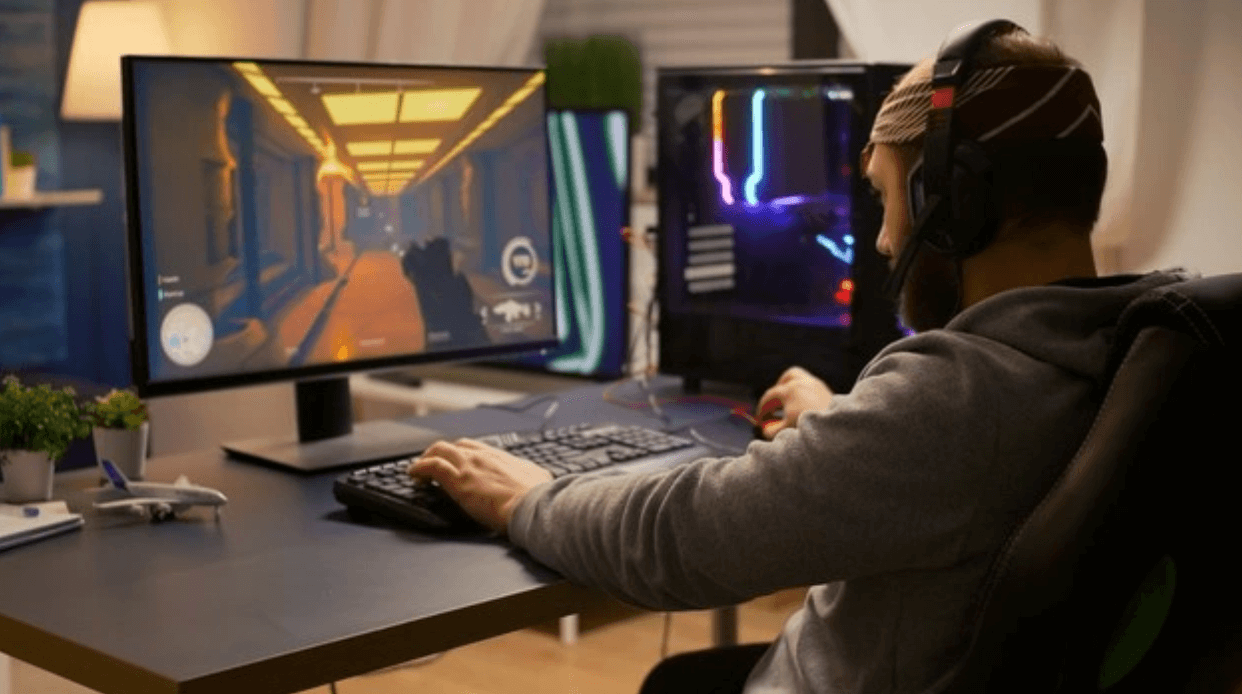 Different genres focus on improving all kinds of skills. They boost strategy, decision-making, logic, concentration abilities, etc. But there is one that combines all these features. Shooters pit you against NPC-driven characters or real people in a fast-paced environment. The power of firearms and constant danger create a special gripping atmosphere. Let’s have a look at the best online shooting games with polished mechanics.

The Most Popular Types

Free online FPS games are the best in the context of immersion. Seeing through the eyes of your character, you better perceive the virtual world.

Such titles give you a wider scope of vision. As well as provide better navigation as you see where the character goes. Besides, it’s cool to visualize your hero in detail. For example, muscled, trained, shining with gear and ammo, etc.

Such a perspective reveals the map from above. It allows players to abstract their mind and be more effective in matches.

Do you think that Minecraft lacks action? Try Krunker, a multiplayer FPS set in the world made of blocks and squares. Its short sessions and heated battles make the adventure dynamic and action-packed.

Before the match begins, choose the type of fighter you want to use. There are 13 in total. For instance, a triggerman, racketeer, trooper, etc. Some are blocked, while others are available right away. Each has its own primary gun and combat style. In addition, you can customize your character: skin tone, hair, clothes, etc.

The rounds take place on different 3D maps with a super-realistic environment. Buildings, tunnels, city sounds, and birds chirping… Attention: the combat itself is challenging. Move fast and never stand still if you want to win. Pros kill right during the jump or on the go. That’s the skill you’ll need to be effective.

What will an egg do if you give it a weapon? Massacre! It sounds crazy, but this is exactly the scenario in Shellshock IO.

You’ll be fully equipped for the survival mission. 7 firearms are free to pick at any time. But they have different stats and purposes. For example, Scrambler is good for close-range shooting, while Crackshot is a sniper rifle. If this is not enough, take a look at the shop. There are 12 more weapons, but you’ll need in-game currency (golden eggs) to get them. Earn some for taking down your opponents!

It’s easy to identify newcomers in the video game. They stand still, need lots of time to aim, and never use grenades. Experienced players combine the weapons: their primary one, the handgun, and bombs. And not just when the ammo is about to end. Do it when it seems tactically right. Dive in to get the hang of it. Become the greatest warrior of all time!

Real battles are not only about pulling the trigger. Voxiom manages to deliver the balance between the action and defense mechanics. Take a spade, building blocks, and 2 types of weapons and jump into the round. A tip: look for a big gray block. It has other firearms inside, so you can change your loadout.

There are 2 modes. Fight for yourself, with hostiles all around. Or join teams, protect your base and work with strangers to win. Switch tools by tapping keys 1-5. Ditch trenches, build walls, as well as destroy them with bullets.

The in-built chat box allows you to communicate with your friends and enemies. However, you need level 5 to access it. Sign in to save your experience and achievements.

You always start as a bad-ass girl with a pink firearm. There are other skins as well. However, you’ll have to register to get access to them. Have a look at the customization section. The choice of the gun influences your combat style:

Additionally, you have a sledgehammer if your opponent gets too close for a hit. Luckily, the ammo is endless. However, you’ll need to reload the weapon, which takes a couple of seconds.

The 3D visuals are colorful and feature well-drawn characters and their movement. There are usually no lags present. If you like to play with friends, use a link to invite them. Enjoy the challenge from different computers and have fun together.

Although it’s not a first-person shooter, this web title deserves to be on the list. A top-down perspective always feels special. In Battle Dudes you control a circle-like killer and use the environment to your advantage. There are houses to hide in. But beware: someone can pop in or plant explosives here.

The coolest part is the opportunity to drive military cars. Unfortunately, you become an easy target for everyone. But if you maneuver fast enough, you’ll dodge bullets and run them over!

As for the area, the terrain is also thought-through. There might be a river, bridges, roads, lawns, corridors, etc. If you like to work with teammates, pick the mode to catch flags. Or compete with everyone around. If you log in, you can create a private party for your friends only.

You’re sure to like this adventure due to the scale of action here. War Brokers has 4 modes:

You’ll ride all kinds of war machines: helicopters, tanks, trucks, planes, etc. It’s easy to get in. Just approach the vehicle and press F to board it.

The variety of options in the arsenal is also impressive. You’ll find any firearm you know of, and even such medieval classics as an arbalest! It’s definitely worth signing in to get extra bonuses. Such as tracking your progress, customizing the soldier, completing special missions, etc.

The controls are intuitive. Your muscle memory will quickly adjust to the layout to be truly effective.

Do you feel itchy to play free shooting games online? Dive in when you have a break at work or school. These titles will work even on low-end PCs. But you’ll still need some gear to have a better experience. For instance, a cool mouse and a new pad to quickly react to approaching enemies. Or a headset to hear them from a distance. Check out this article to learn more.