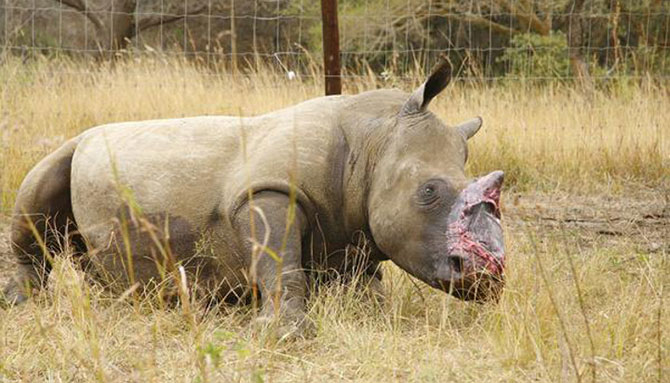 “Cecil was a 13-yr old male Southwest African lion who primarily lived in the Hwange National Park in Matageleland North, Zimbabwe. He was major attraction at the park and was being studied and tracked by the University of Oxford, as part of a larger study.” (Wikipedia).

Hope: A Story of Compassion:
Recently poachers shot this 4-yr old female rhino at the wildlife park in KwalaZulu-Natal province.

Then they cut off her horns her horns, leaving her to go around in extreme pain from her wounds, with death only a few hours away.

What happened next will warm your heart.

Today, the war of poachers against game wardens is a real as the wars on the Middle East. In each, untold misery and casualties occur.

The South African Department of Environmental Affairs reported earlier this year that nearly 400 rhinos had been killed by poachers between January and April alone.

In 2014, the total number of rhinos poached was over 1,200, or as the environmental group Save the Rhinos, “one every eight hours.” Most of them were not killed but had their horns hacked off, like that of Hope.

These stories, one of grief, the other of hope are happening each day in the wilds of Africa and elsewhere where game exists. You may think that you are so far removed from these horrifying realities of conserving and preserving engendered animals.

You are wrong. Everything in this world is inter-related. No organism exists by chance but for a reason. That being said, we all need to do something to protect this harmless and beautiful creatures. You need not go to these places where drama occurs every day. All you need to do is to make a concrete decision to help, wherever you are now.

The choice is yours.