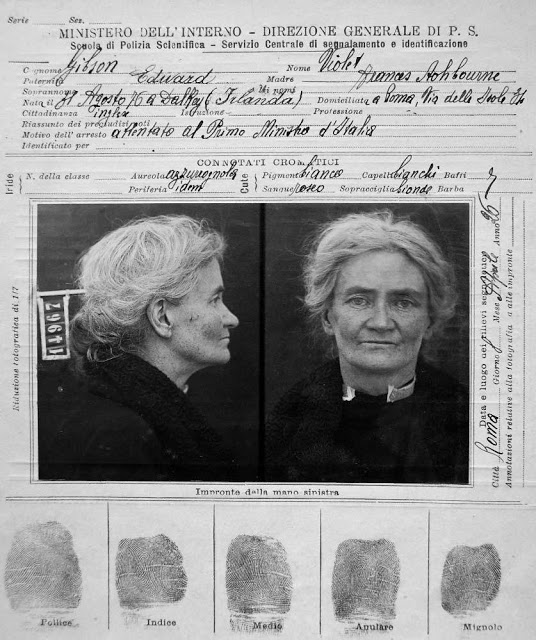 Violet Gibson’s prison ID card made shortly after her 1926 arrest.

Historians now speculated how different the world may have been if she had succeeded. But how had Violet Gibson’s life gone from the well-to-do upbringing of Merrion Square in Dublin to dying in a mental asylum having attempted to assassinate a world leader and Italy’s fascist leader?

If Violet had hit her target, Mussolini’s reign as the Italy’s “strongman” would have ended and his successes could not have emboldened Adolf Hitler. Il Duce’s legacy is still felt in Italy and in Greece, the Golden Dawn proclaim themselves fans of the fascist leader. 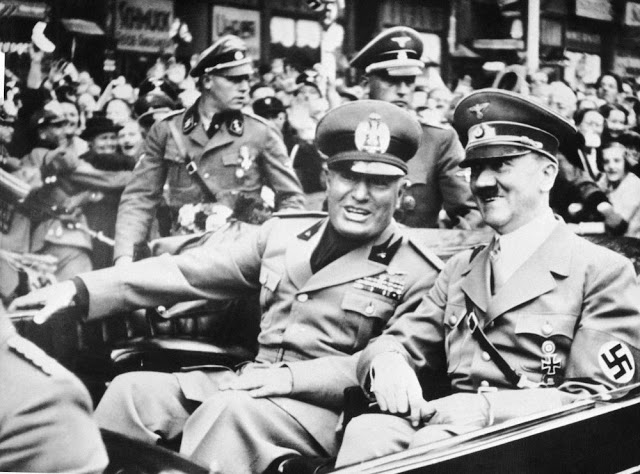 What’s worse is that Gibson’s failed assassination only elevated Mussolini’s popularity in Italy. After the attempt against his life, it triggered a wave of support for Il Duce that possibly strengthened his grip on Italy.

So what drove her to shot Mussolini in the face?

Violet Gibson’s upbringing was one of privilege. Her father was 1st Baron Ashbourne who served as Lord High Chancellor of Ireland from 1885 to 1905. Violet grew up dividing her time between Dublin and London and at the age of 18 was a debutante in the court of Queen Victoria. 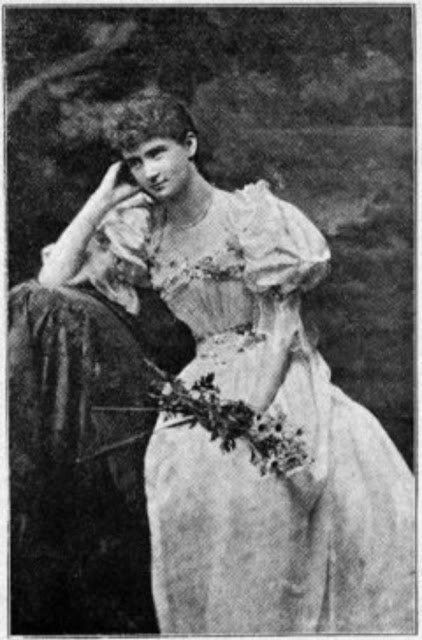 But it was noted that as a child Gibson was often sick with scarlet fever, pleurisy, bouts of ill-defined “hysteria” and that she had a “violent temper.” During her younger years she also showed an interest in Christian Science and theosophy. At the age of 26, she converted to Catholicism.

Violet had been married in 1913 to an artist, and widowed. She moved to Paris and worked for pacifist organizations. In this year she contracted Paget’s disease (an abnormal breakdown of bone tissue) and a mastectomy left her with a nine-inch scar. She returned to England where a surgery, for appendicitis, left her with chronic abdominal pain.

Violet became more and more obsessed with religion in her 40s. She went on retreats, followed the Jesuit scholar John O’Fallon Pope and became fixated on the ideas of martyrdom and “mortification.”

In 1922, she had had a nervous breakdown and was committed to a mental asylum having been declared insane. Two years later, along with a nurse named Mary McGrath, she traveled to Rome where she lived in a convent.

By this point, Violet was convinced that God wanted her to kill someone as a sacrifice.

In February 1925, Violet got hold of a gun and shot herself in the chest. Miraculously she survived.

In March 1926, Violet ’s mother passed away. By April of that year, her obsession with killing someone had refocused and that someone was Benito Mussolini.

On April 7, 1926, Violet went to Palazzo del Littorio with her gun wrapped in a black veil and a rock, in case she needed to break Il Duce’s car windshield. While Mussolini drove through Piazza del Campidoglio in Rome, after leaving an assembly of the International Congress of Surgeons, to whom he had delivered a speech on the wonders of modern medicine, Gibson jumped from the crowd and shot the Il Duce in the face.

Her rock was unnecessary as the leader walked among the crowds just feet from Gibson. Her first shot grazed Mussolini’s nose and on the second shot the gun misfired.

The Mussolini stayed calm and told the crowds “Don’t be afraid. This is a mere trifle.” The fascist leader was slightly injured and after having his nose bandaged he continued his parade.

Benito Mussolini pictured after surviving an assassination attempt on his life, a bullet grazing his nose. 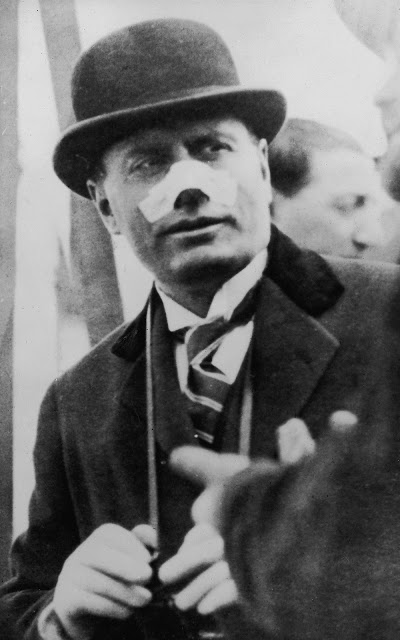 Later Mussolini said that while he was ready for “a beautiful death” he did not want to die at the hands of an “old, ugly, repulsive” woman.

In custody for her crimes Gibson said she shot Mussolini “to glorify God,” who had sent an angel to keep her steady.

Violet Gibson with police after being rescued from a violent mob. 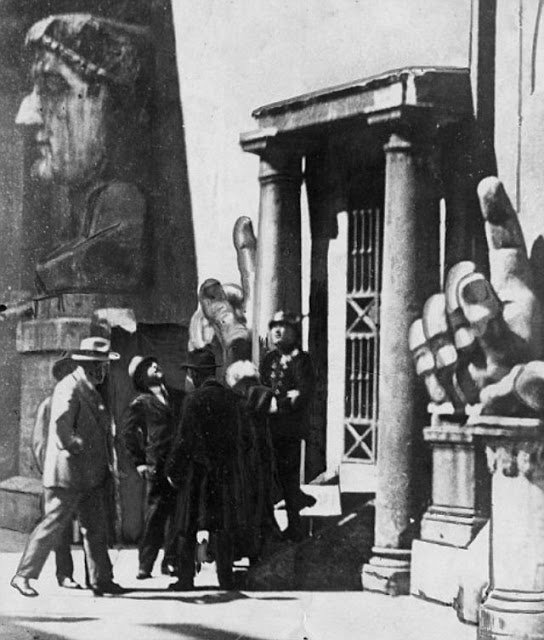 Gibson’s family wrote to the Italian government to apologize for her actions. Violet was declared a “chronic paranoiac” and returned to England and St. Andrew’s Hospital. She died in 1956.

Il Duce was finally killed on April 28, 1945, during the final days of World War II. He and his mistress were taken to Milan and left in a suburban square hanging upside down from a metal girder above a service station.