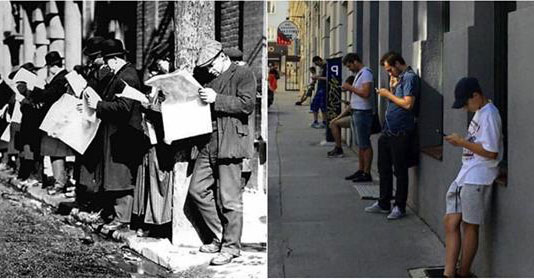 Looking at these rare photos of the past gives us a different perspective of our history. It can also help us to imagine better what it was like to live through that moment, now lost forever. Below are 20 fascinating images that fit this description perfectly.

A five-megabyte hard drive is shipped by IBM, 1956.

You have no chance of attracting her attention if your opponent is Alain Delon. Even if you’re Mick Jagger.

Women protest against the forced wearing of the hijab in Iran after the Islamic Revolution, 1979.

Alfred Hitchcock playing with his grandchildren, 1960.

Osama bin Laden on vacation with his family, Sweden, 1970.

Nikola Tesla in his laboratory.

Ernest Hemingway after one of his parties.

The last photo of the Titanic before it sank, 1912.

A Frenchman gives a light to Winston Churchill, 1944.

A smoking break during the construction of the RCA building, 1932.

The seal on the doors of the tomb of Tutankhamen, 1922. It had remained intact for an incredible 3,245 years.