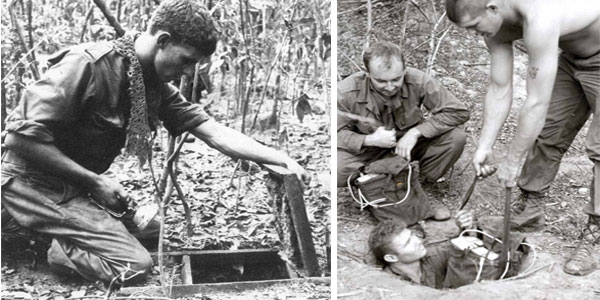 These fearless combat engineers descended into the complex Viet Cong tunnels to gather info and disarm bombs — often at the cost of their own lives.

For a soldier during the Vietnam War, one of the most dangerous of obstacles was faced by a select few soldiers known as “tunnel rats.” These unsung heroes of the Vietnam War were American, Australian, and New Zealand soldiers specially trained as combat engineers, who carefully crawled through the cramped Viet Cong underground to perform perilous covert search and destroy missions.

The tunnel rats gently prodded for potentially armed mines in order to disarm them and prayed that they survived with both their legs.

With pistol ready, a G.I. shovels dirt into a tunnel entrance where Viet Cong were believed to be hiding. 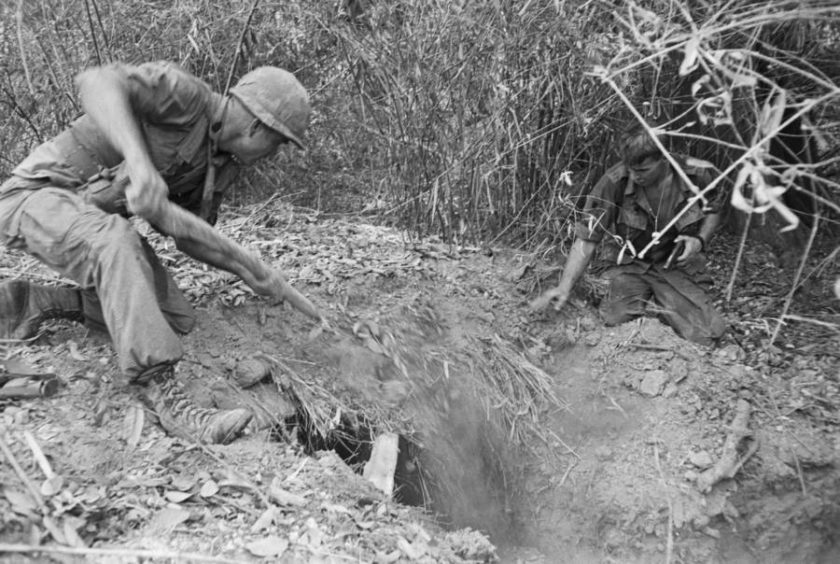 A Network Of Enemy Tunnels

Viet Minh forces initially developed a complex system of underground tunnels to combat the French colonial invasion of Vietnam known as the Cu Chi tunnels. But what began as a fairly rudimentary system of tunnels quickly became a sophisticated labyrinth beneath Vietnam when it was later utilized by the Viet Cong to combat the U.S. and allied forces. 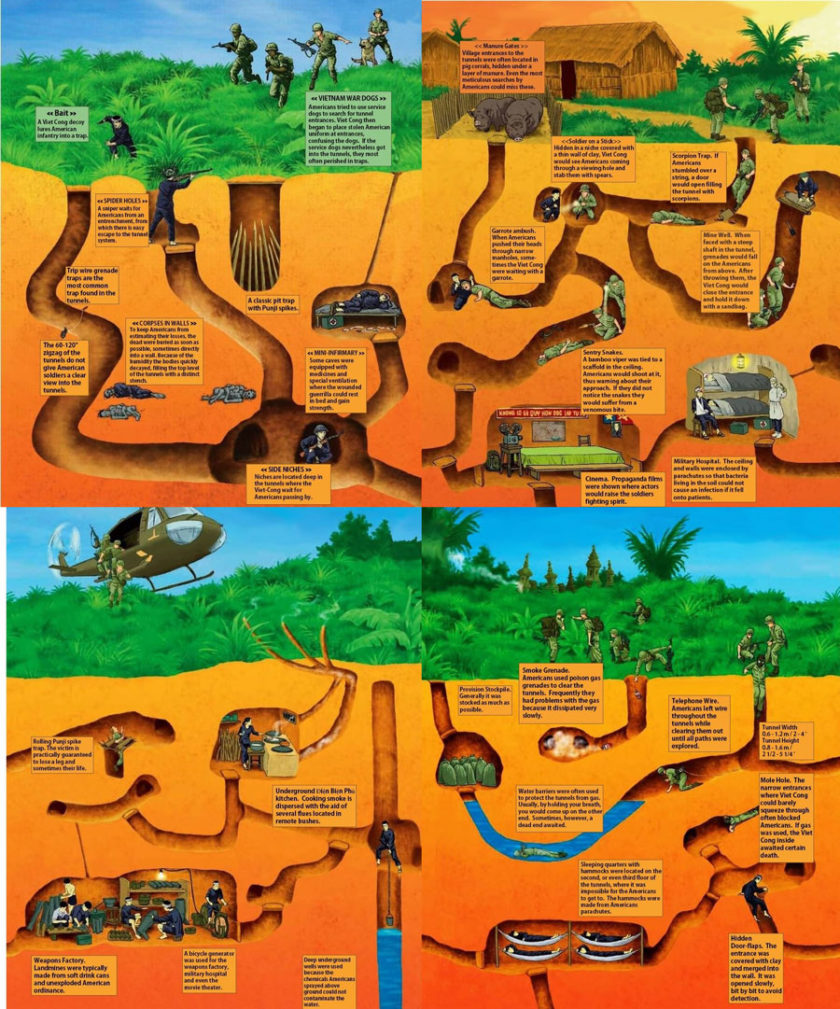 By the onset of the Vietnam war in the 60s, the tunnels included several hospitals, storage facilities, training camps, and barracks. Effective ventilation shafts were later installed which allowed Viet Cong soldiers to remain hidden underground for months at a time.

The tunnels could be destroyed above ground, but often because the tunnels were so complex and snake-like, an above-ground demolition was not enough to dismantle the labyrinth entirely. Someone would have to go down into the tunnels to gather information and better inform their attack. Thus, the tunnel rats came to be.

But the tunnels proved to be an even more mysterious, uncharted area where danger lay around every corner. Besides enemy combatants, the tunnels were decked with booby traps as the Viet Cong knew full well that the American forces would try to use the underground against them. 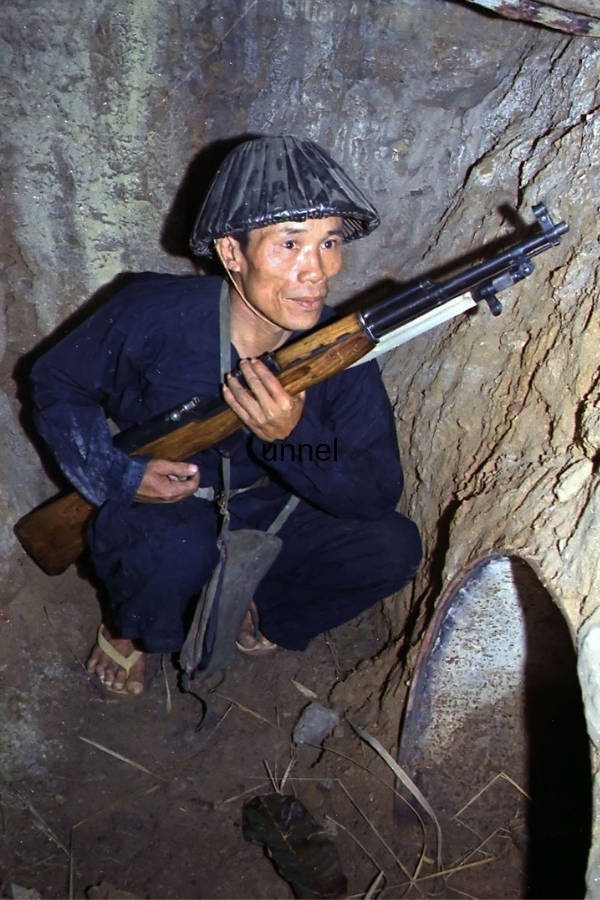 Along the tunnels, U-bends had been placed which allowed sections of the tunnels to be flooded and trap a solider. Similarly, entry points were created where poisonous gas could be introduced to kill or render a soldier unconscious.

Less sophisticated traps were also used. Various species of venomous snakes, known to the Vietnamese but not to the outsiders, were dropped into the tunnels.

An American soldier peers into a tunnel’s trap door. 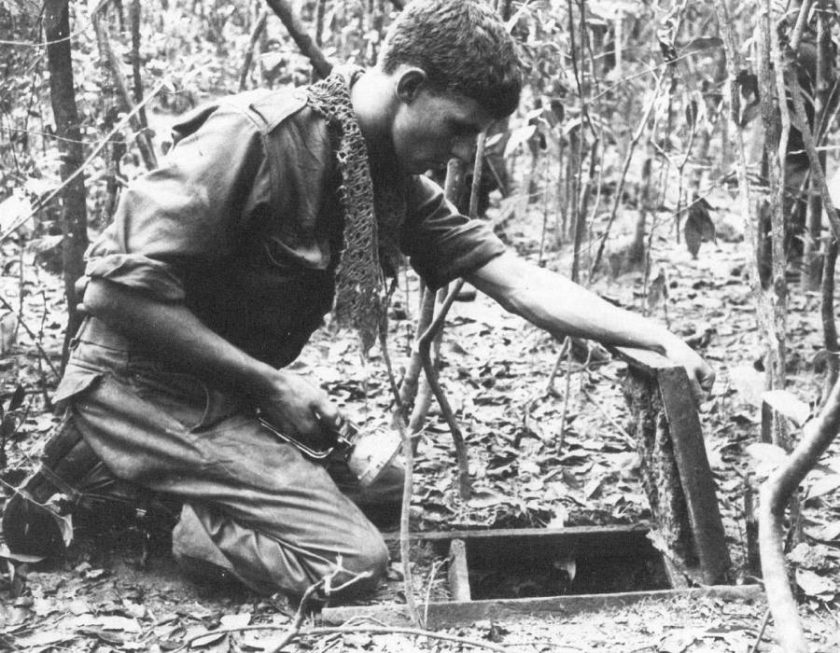 Aside from intentional dangers, there were the natural ones as well. Being underground meant troops were subject to insects, some poisonous like scorpions, and others annoying, like ants. Bats and other creatures used the tunnels as roosts, providing yet another distraction from the task at hand.

The tunnel rats were forced to be creative and often even managed to maneuver around these attacks.

The Profile Of A Tunnel Rat

Originally called “Tunnel Runners” and later “Ferrets” by the Australian Army, the term eventually morphed into the known “Tunnel Rat.” The rats were comprised of engineering soldiers some of whom were trained at the Australian Army’s School of Military Engineering. Most men were volunteers and tended to be of smaller stature, making it easier to maneuver through the cramped spaces.

Troops often went into the tunnels armed with only an army-issue pistol or revolver, and so the soldiers became ingenious with creating their own weapons. Usually, the weapons of their own devising were sawed-off shotguns and makeshift bayonets. The soldiers also armed themselves with gas masks.

Soldiers reach into a tunnel to pull a man out. 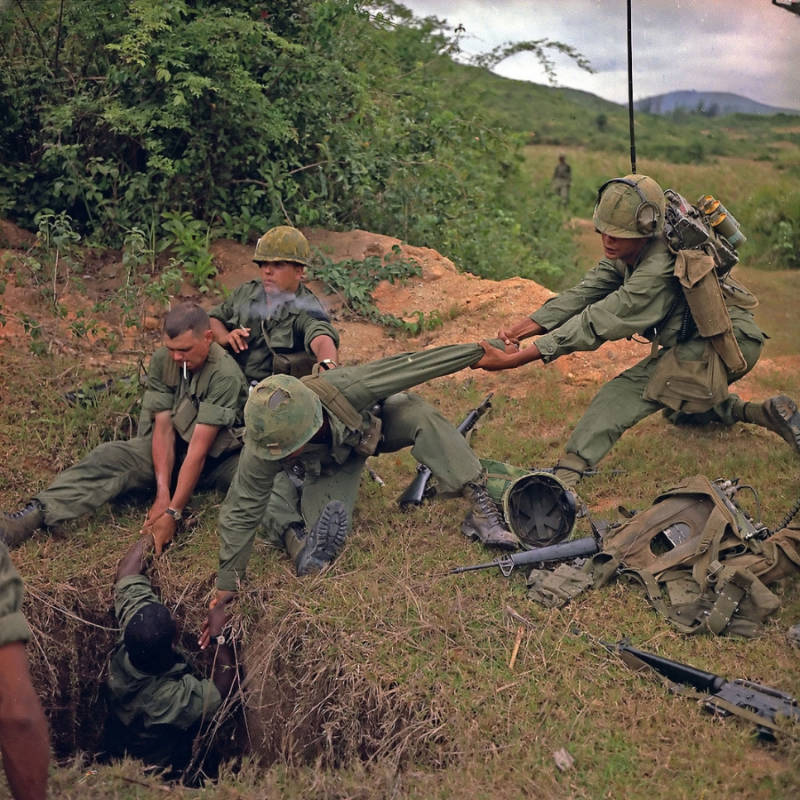 Often when faced with a Viet Cong soldier below ground, tunnel rats had to resort to hand-to-hand combat, as firing a weapon in such a small space could spell disaster for eardrums and the stability of the space around them.

But the tunnel rats’ time underground was to one veteran named Sapper Jim Marrett, “the least of [his] worries.”

In a personal essay for The New York Times, Marrett wrote that as dangerous descending into the tunnels was, “Most of our casualties were aboveground, when we engaged in the other part of our job: finding and disarming mines and booby traps.”

A tunnel rat checks out a possible ventilation shaft. 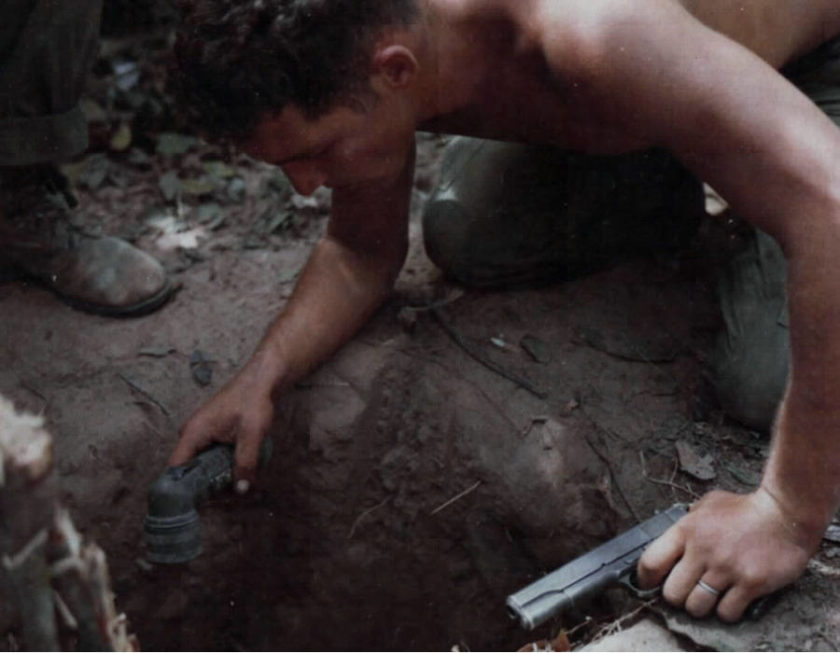 Marrett reportedly spent weeks in the bush locating and disarming mines, “During that period 36 of us were killed and around 200 were wounded, giving us a casualty rate of 33 percent, high even by Vietnam War standards. One in three of us was either killed or wounded during our tour.”

A soldier pops out of a tunnel trap door to relay information. 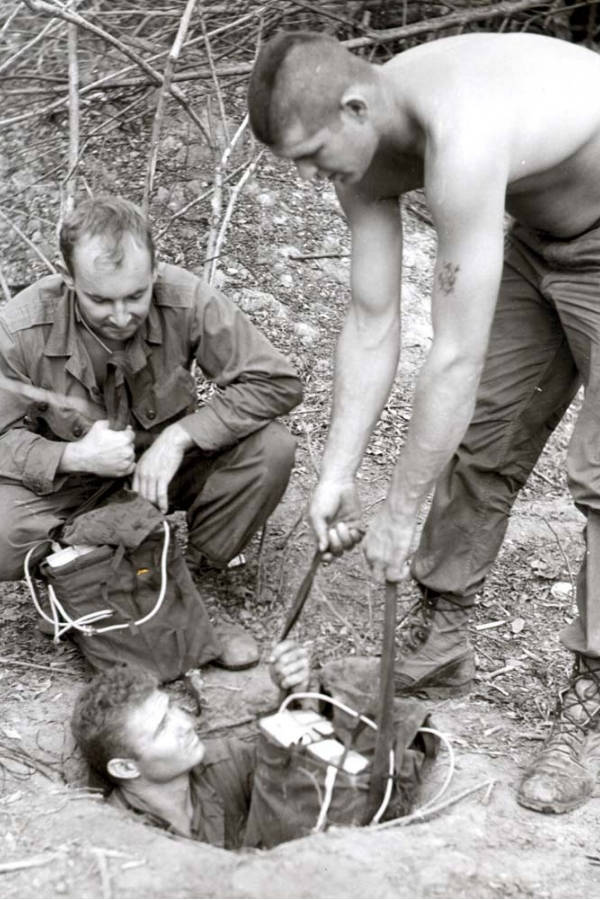 Marrett recalled of his company’s tragedies, “…given what we were engaged in, it’s a wonder that number wasn’t higher.”

The tunnel rats were required to use their ingenuity and incredible bravery to fight in an unprecedented form or guerilla warfare the American forces had not yet seen. Indeed, considering the elusive and hidden odds stacked against them, it’s amazing their outcome was not much, much worse.