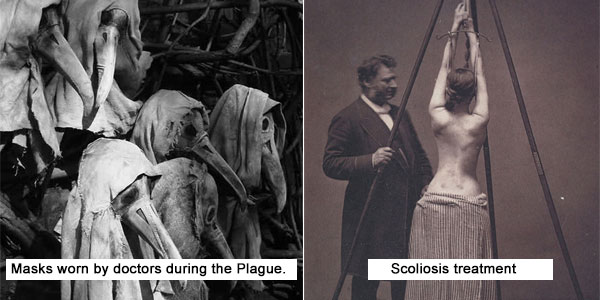 History is filled with stories of strange medical practices, even hilarious ineptitude. Here’s a collection of creepy historical photos in the practice of medicine.

1. Masks worn by doctors during the Plague. The beaks held scented substances.

2. Children in an iron lung before the advent of the polio vaccination. Many children lived for months in these machines, though not all survived. c. 1937

22. Anatomical Model. Doctors were not allowed to touch the women’s bodies, so they would point to describe pain locations

27. Leonid Rogozov, the only surgeon on an Antarctic expedition, performing surgery on himself after suffering from appendicitis. April 30, 1961