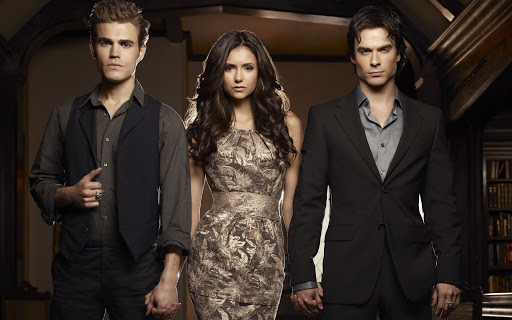 Everyone is crazy to hear Stefan’s opening line in The Vampire Diaries. Especially the younger generation is interested in shows or movies with the supernatural genre, and these types of series have their own fan club. The Vampire Diaries, at first glance, seems like a love triangle between two vampires and a girl.

After some episodes, the show includes a fantasy, romance, drama, and historical fiction at times. Even though this show is irreplaceable, there are some shows that give the same feeling of love and magic to the viewers. Now that if you have experienced the Vampire Diaries magic, then you can forward to some other shows that will help to fill the void.

This supernatural show is filled with bloody rivalries. Scott McCall, an American teenager, and his friend decided to spend an adventurous night in the forest that changed Scott’s life forever when a werewolf bit him. He became a werewolf himself and got powers that he never saw before. He becomes stronger, popular, and faster as well as angrier. The mix of Scott McCall’s puberty and anger, along with different enemies with supernatural powers, keeps running into giving you a blast. This is not about Vampires, but the show is all about werewolves but has the same feel.

Salem was on-air from 2014-17, and it is a supernatural drama series. The story is based on the 17th century American history with one of the darkest periods, the Salem Witch Trials. The story revolves around Mary Sibley, the strongest witch in the Salem town and her lover. Mary’s former lover returns to the town of Salem, and her plan to use the dark powers have to change. This show is perfect for the fans of the Vampire Diaries, which is about vampires along with side stories that involve werewolves, witches, and other supernatural creatures. Salem also has the same suspense and dark drama that makes the viewers addicted.

This is a teen drama that aired from 2010-17 with a total of 7 seasons. It is set in Rosewood, and the story is about the group of friends who are forced to come back after the disappearance of their friends. Things started to take a dark turn, and when the group started receiving strange messages.

This is not a totally supernatural series other than some ghost stories in the Halloween specials. This show is perfect for the fans of The Vampire Diaries, and the characters are interesting. The surprises, twists, and drama keep you hooked.

Riverdale, a suspenseful series for teenagers, is a dark TV adaptation for the Archie comics that follow all Archie characters, including Archie and his friends Betty, Jughead, and Veronica. Since 2017 this series is a part of the viewer’s life and keeps people guessing about the next happening. Although like The Vampire Diaries, this series lacks the vampires, the intensity and drama are enough to keep the fans engaged.

The show will take you to the time of 90s. This is a supernatural drama that was aired from the year 1997- 2003 with the spinoff series. The story follows Buffy, the Slayers who are responsible for keeping the demons, vampires, and other supernatural dark creatures away from the world. It might be possible that many fans of the Vampire Diaries have already seen the Buffy the Vampire Slayer and spinoff series, Angel. However, if you have not seen this classic series in the ’90s, then it is the time to enjoy it.

The Chilling Adventures of Sabrina

Fans of 90’s Sabrina will surely like a darker version of it. This adaptation follows as Sabrina, a half-witch, and half-mortal trying to balance the light and dark within her. People who love to watch characters like Stefan in The Vampire Diaries that holds the balance onto the humanity being a vampire will surely hook on this series. The show is spooky and dark with fun imagining of life in Sabrina.

The Charmed show has a total of 8 seasons that aired from the year 1998-2006. Set in San Francisco, it is the story of three sisters who came to know that they are witches. These witches were good, and their purpose is to protect the world from evil forces and try to keep their normal lives balanced. This is similar to the Vampire diaries that focus on supernatural beings living in the world with normal people. If you love Bonnie’s character in the Vampire Diaries and fan of more witchy stories, then Charmed is a must-watch classic show.

Most of the fans of The Vampire Diaries must have seen this spinoff. You could enjoy five seasons if you missed out on it. This is time to watch this series if you want to know what happened to Hayley, Rebekah, and Klaus after they left the Mystic Falls.

The X-Files is a popular series based on science fiction with a total of 11 seasons that began airing in 1993. The story revolves around a pair of FBI agents who travel around the world to investigate the strange and unexplained events with varieties of paranormal activities.

If you are a fan of supernatural creatures featured in The Vampire Diaries as side characters, then you will love this show for sure. In every episode, you will see two agents investigating the out of the world phenomena in a spooky and suspenseful way.

The storyline of Being Human revolves around a werewolf, a vampire, and a ghost. They share the apartment together and trying to balance out their double lives. This show has the same essence of The Vampire Diaries in the sense that all the characters hold their humanity even they are not human.

Beauty & Beast is a classic tale with a dark and intense love story. This is a show like The Vampire Diaries and has the same theme. One of the characters falls in love with the other character that is dangerous to the person. This is a dark imagining of a Disney movie.

It is a spinoff of the Originals and The Vampire Diaries, but all the things are different in this series. Previous shows focused on witches, vampires, and werewolves, and this awesome show introduces new creatures in every episode from dragons to even gargoyles. The story follows Alaric for supernatural students at his school, his twin daughters, and Hope, the Klaus’ daughter.

This is a hidden gem with a story about women who gets to know that she is a succubus after the miss happening at an intimate moment. This is a perfect show for a mature audience only as it includes lots of dark topics. It deals with Fae, the supernatural beings having a distinct way to feed off humans.

The show has a little different storyline, and Somerhalder played the dark and cruel vampire Damon. He is a human scientist, and the show focuses on the biological side of vampires, but the show is a must-watch if you want to see unique content in the supernatural genre.