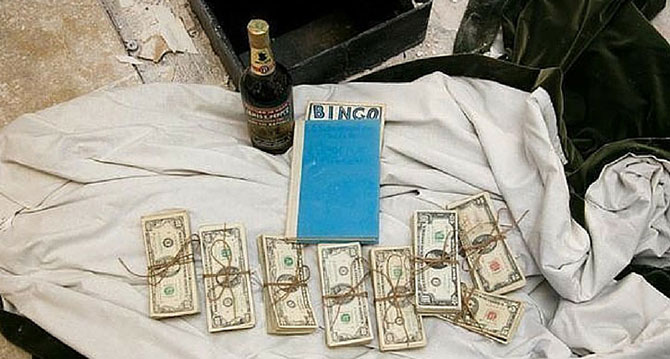 IF you’re like me, you will impulsively consider knocking on the walls in every room of your home after reading this. If you’re lucky, you might find a rare comic book or a rusty but very valuable sword hiding behind some old junk, waiting for you to discover. No snakes please, like a family in Idaho found. Here are some of the shocking things people have discovered in their homes.

A man in Utah found trash bags full of cash in his basement. He then returned all the money to its rightful owner.

One family discovered this ancient, kind of creepy chapel beneath their home.

A couple wanted to renovate their home, but when they tore up their old floor, they found a life-size monopoly board.

One family never notice this small door in their basement. It was covered by some junks. When they opened the door, they discovered a servant’s quarters that had been untouched in decades.

A man was rooting through the attic of his home when he stumbled upon this newspaper clipping from the day JFK was assassinated.

This couple found a medieval well just beneath their living room.

A couple in Bel Air noticed a strange space in their vanity. After closer inspection, they found a secret compartment that contained some vintage Mexican Jewelry.

A family in Idaho was completely horrified to find THOUSANDS of snakes living in the walls of their home.

One family found some treasures buried beneath their home that pre-date the birth of Jesus.

A family found a 50-year-old safe in their house containing $51,000, a vintage bottle of bourbon, and a of “A Guide for the Perplexed” by E.F. Schumacher.

A family stumbled upon this rare Russian Doll in their home. It sold for millions at an auction.

A man discovered a 40-year-old jar of popcorn kernels in his attic. Okay, not the best find, but still…

A family found 4,000 antique pieces under their floorboards.

This Van Gogh painting in 1888 was found in a Norwegian attic where it had sat for many years.

This century-old knife was discovered in a ceiling.

A family found a Keith Haring mural on their wall when their property was used as the visual school of art in Manhattan.

A guy discovered a briefcase in his attic that contained money from around world, watches, silver, and this cryptic note: