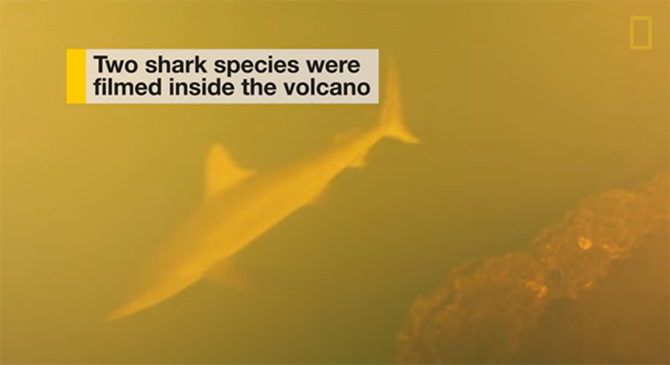 In search of hydrothermal activity, ocean engineer Brennan Phillips led a team to Kovachi, an active submarine volcano located in the Southwest Pacific Ocean, in the remote Solomon Islands. Kovachi first erupted in 1939, and its most recent eruption occurred in January of 2014.

To explore the volcano’s underwater activity, the team dropped a deep-sea camera into the crater.

“You never know what you’re going to find. Especially when you are working deep underwater. The deeper you go, the stranger it gets.”, Phillips said. “No one has ever looked in the deep sea there, period. No one’s been out to anywhere in the Solomon Islands and gone deeper than a few hundred meters or deeper than a scuba diver has gone, really. So we were very excited. We thought there was a lot of potential.”

What the footage revealed surprised the researchers!

Throughout its hour-long journey inside Kovachi, the camera spotted the scalloped hammerhead shark, the silky shark, the sixgill stingray, some jellyfish, snappers and some small fish, all of which are seemingly unaffected by the hostile temperatures and acidity.

“When it’s erupting, there’s no way anything could live in there. That’s what makes discovering these animals down inside the volcano so perplexing. They’re living in a place where they could “die at any moment,” so how do they survive?”

Watch the video to see the team’s incredible discovery!