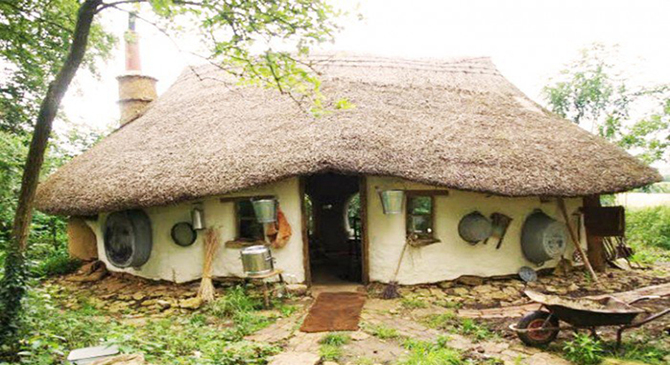 Check out this house. Doesn’t it look like it belongs in a fantasy world? I mean, it could easily be Frodo Baggins’ country home or the Seven Dwarfs’ cottage in the woods.

But no, this adorable home can be found in Oxfordshire, England, right in the garden of Mr. Michael Buck, a 59-year-old retired teacher who built it with his own hands for only $250 (£150). Impressed? Wait until you read the whole story.

This particularly cute abode is called a cob house. Cob is an ancient natural building technique where you make a mixture of clay, straw, sand, earth, and water. Michael read about it in a book and decided to teach himself how to use the method.

He spent 8 months creating his cob house, using only natural or reclaimed materials. He said he wanted to make sure that the house would ‘fit in with the landscape rather than intrude upon it’.

The cob house is simple and doesn’t even have gas, water, or electricity.

What it has though is a natural stream of running water that comes from a nearby spring.

“I wanted to show that houses don’t have to cost anything. We live in a society where we spend our lives paying our mortgages, which many people don’t enjoy.”

Other than that, the materials that he used for the construction cost none at all.

The floorboards were given to him from a neighbor’s ship. Several of the windows came from the windscreen of an old lorry. Some of his friends also pitched in and helped him build the cob house.

They even wrote their names to the inside of the walls (which are painted with a plant resin and chalk mixture) as well as the names of their 3 cows Crystal, Mist and Marigold who contributed their dung to make the plaster.

Inside this little cob cottage is a dining area, kitchen area, and a bunk bed to maximize space.

Mr. Michael Buck classified the building as a summer house so he didn’t need permission from the city to build it.

He’s decided to rent out this adorable cob house to a woman who works at a nearby dairy farm. She trades cream and milk for her lodging.

Via The Mind Unleashed