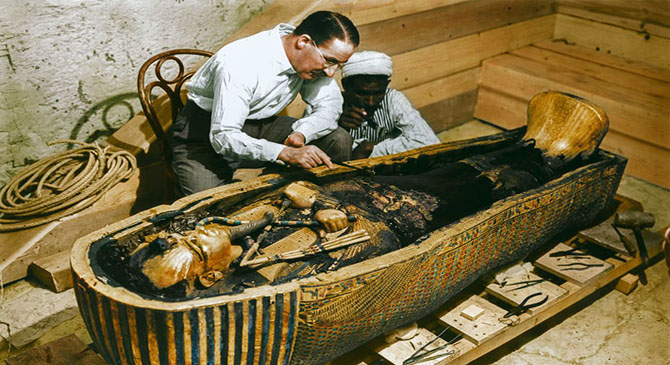 After years of intensive search, British Egyptologist and archaeologist Howard Carter finally found the steps to the burial room of Tutankhamun (alternatively spelled with Tutenkh-, -amen, -amon). Along with fellow archaeologist Lord Carnarvon, they entered the interior chambers of the tomb. What followed was a monumental excavation process where they uncovered an incredible collection including the most splendid architectural find – the stone sarcophagus containing a solid gold coffin with the mummy of the the boy-king Tutankhamun, preserved for more than 3,000 years. (via History)

You’ve probably seen photographs of this amazing find, but of course they’ve always been in black and white. But thanks Dynamichrome, some of the iconic images from the excavation have been colorized for the The Discovery of King Tut exhibition in NYC. Take a look!

Images: Harry Burton (c) The Griffith Institute, Oxford. Colorized by Dynamichrome for the exhibition “The Discovery of King Tut” in New York. 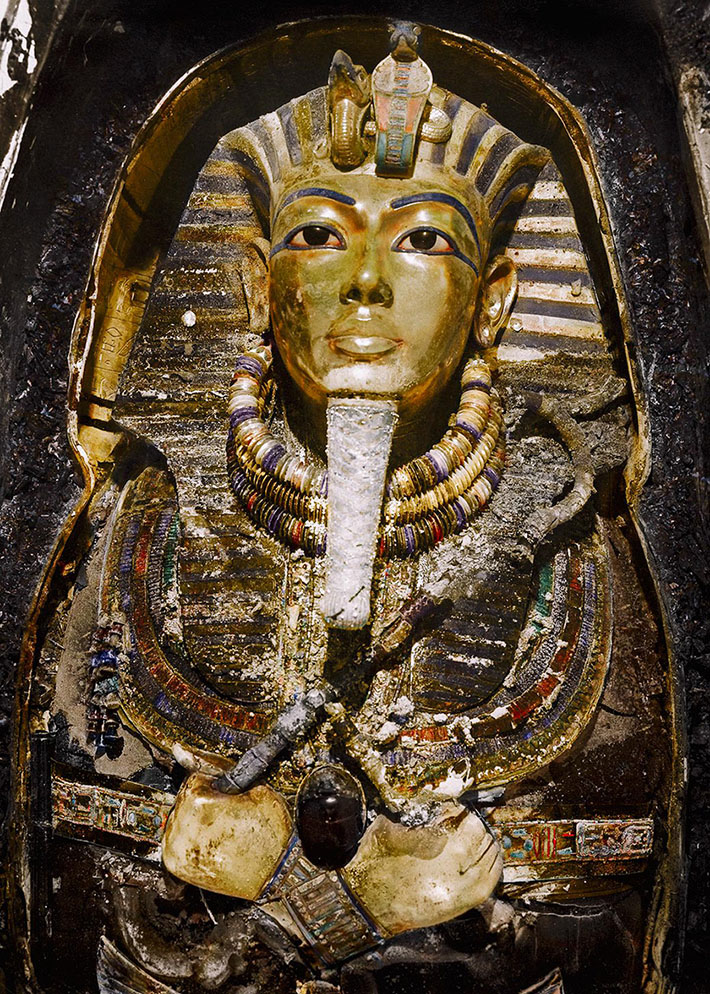 Howard Carter, Arthur Callender and an Egyptian worker open the doors of the innermost shrine and get their first look at Tutankhamun’s sarcophagus.
January 4, 1924 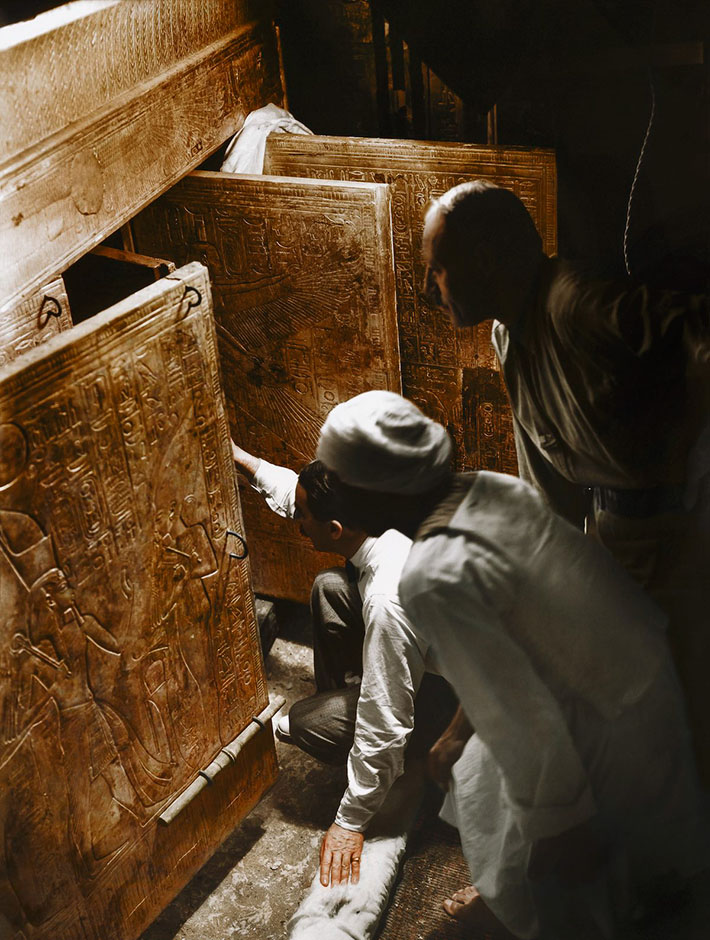 A ceremonial bed in the shape of the Celestial Cow, surrounded by provisions and other objects in the antechamber of the tomb.
December 1922 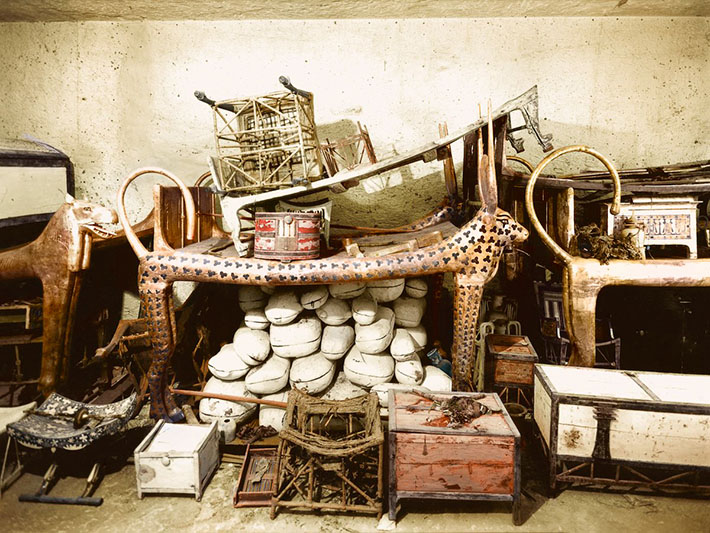 A gilded lion bed, clothes chest and other objects in the antechamber. The wall of the burial chamber is guarded by statues.
December 1922 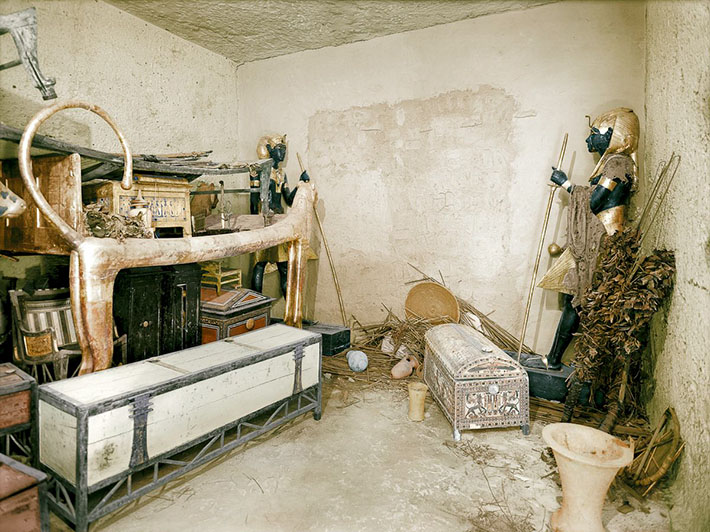 An assortment of model boats in the treasury of the tomb.
c. 1923 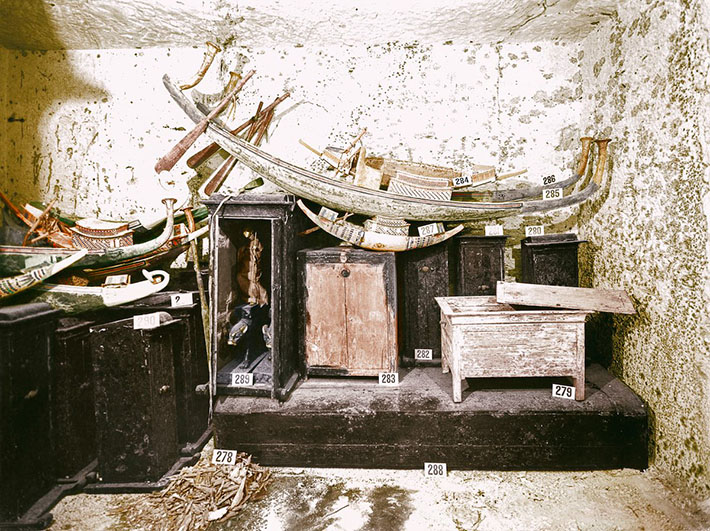 A gilded lion bed and inlaid clothes chest among other objects in the antechamber.
December 1922 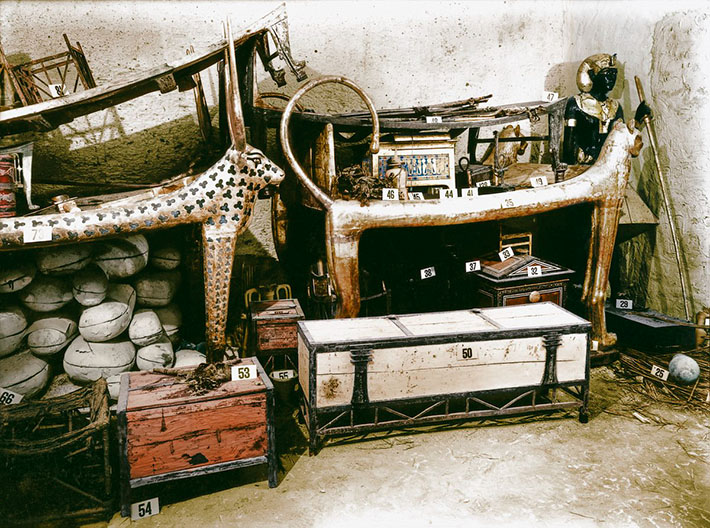 Under the lion bed in the antechamber are several boxes and chests, and an ebony and ivory chair which Tutankhamun used as a child.
December 1922 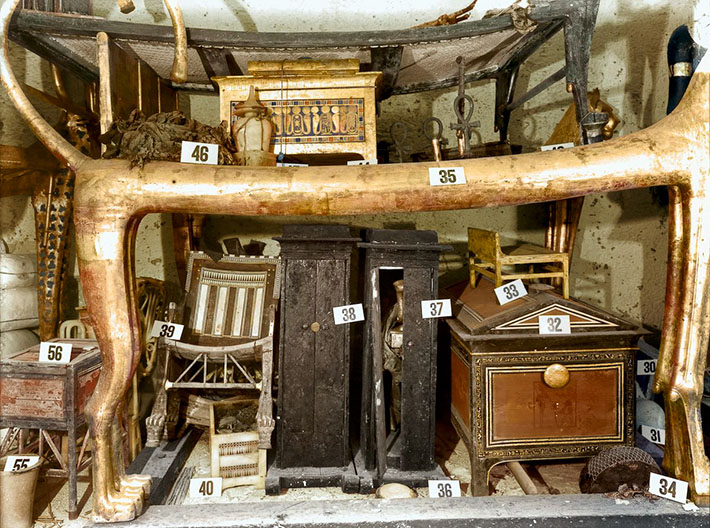 A gilded bust of the Celestial Cow Mehet-Weret and chests sit in the treasury of the tomb.
c. 1923 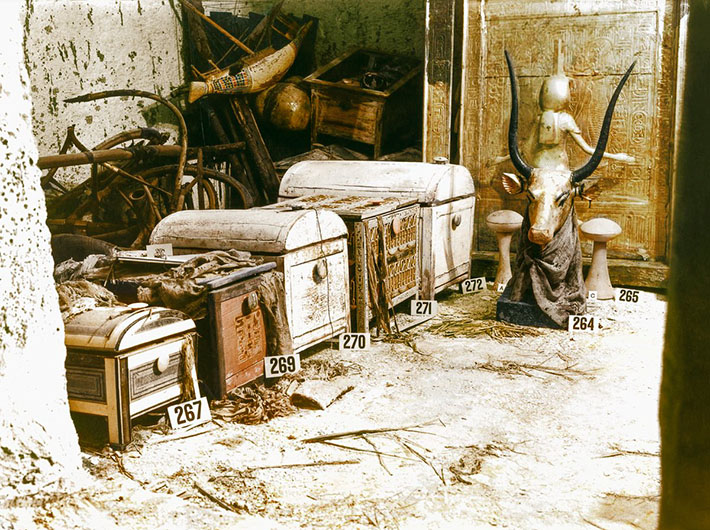 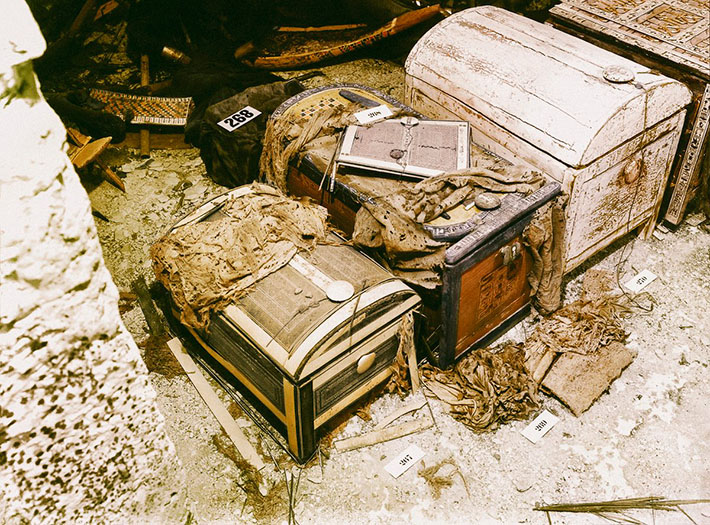 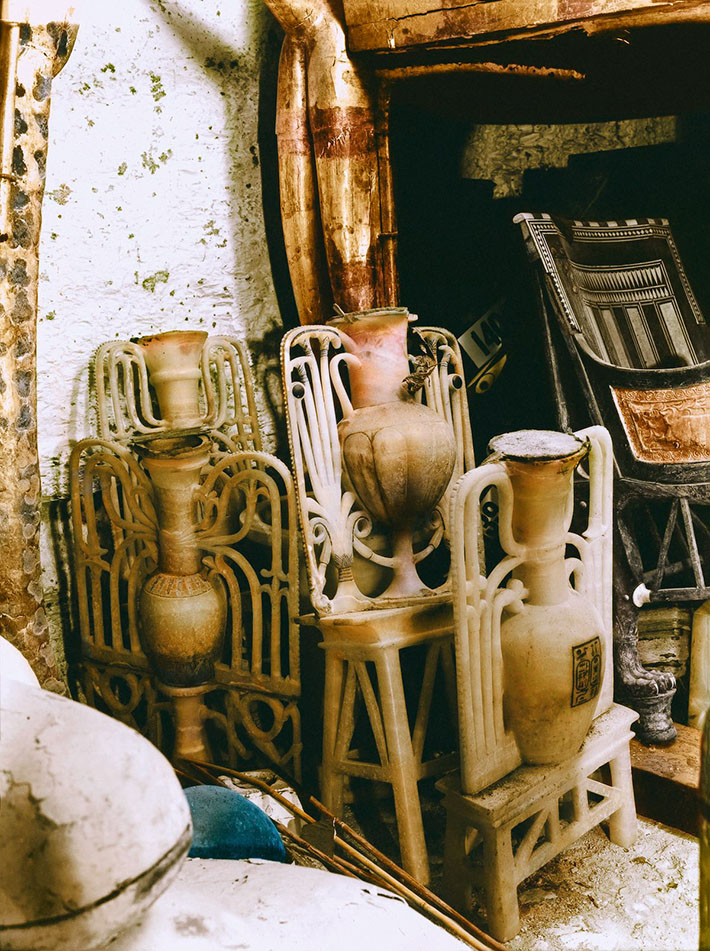 In a “laboratory” set up in the tomb of Sethos II, conservators Arthur Mace and Alfred Lucas clean one of the sentinel statues from the antechamber.
January 1924 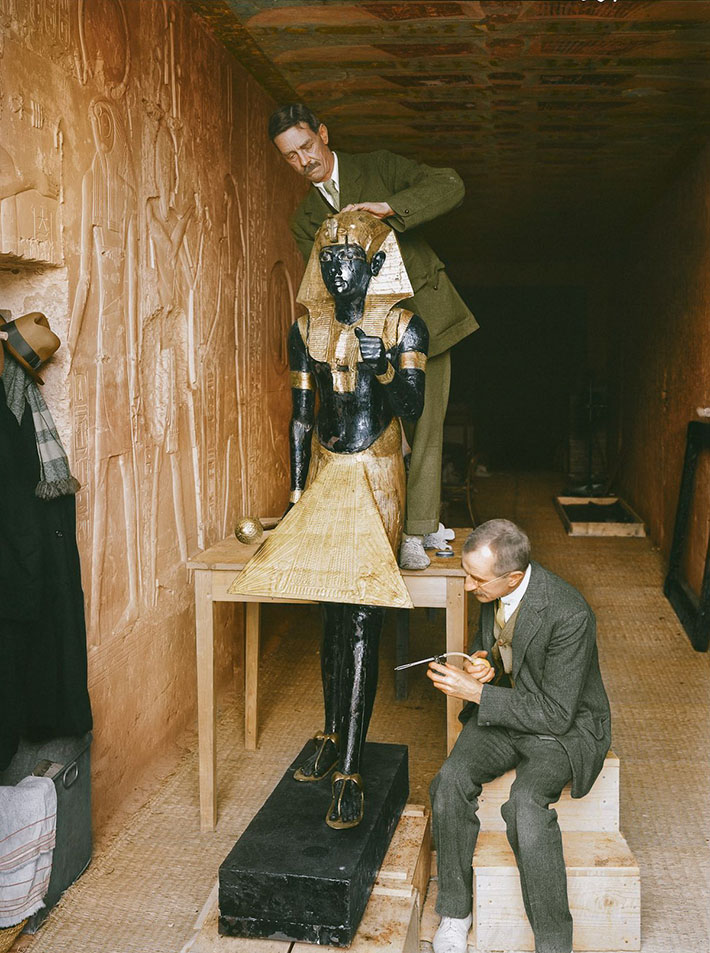 Howard Carter, Arthur Callender and an Egyptian worker wrap one of the sentinel statues for transport.
Nov. 29, 1923 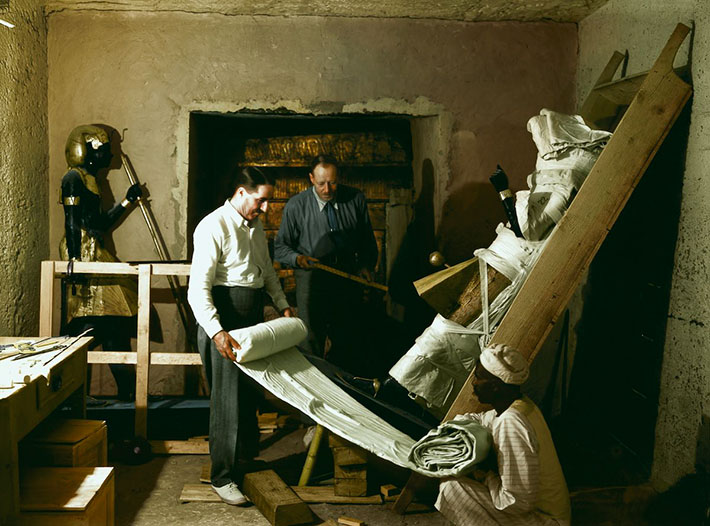 Arthur Mace and Alfred Lucas work on a golden chariot from Tutankhamun’s tomb outside the “laboratory” in the tomb of Sethos II.
December 1923 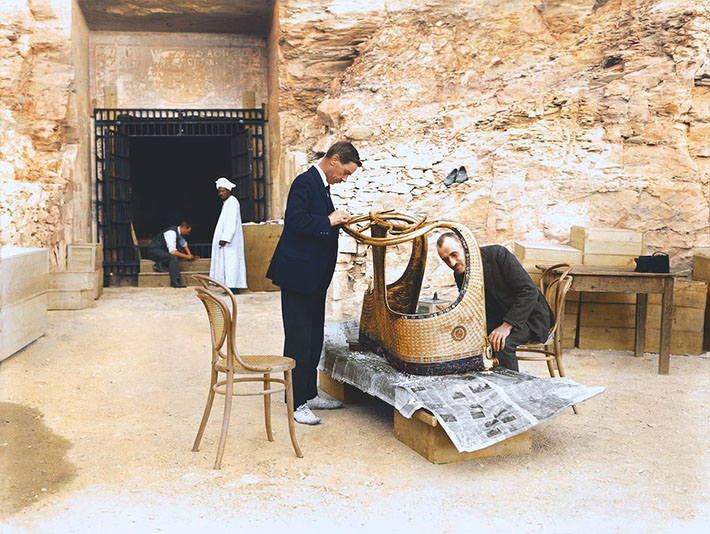 A statue of Anubis on a shrine with pallbearers’ poles in the treasury of the tomb.
c. 1923 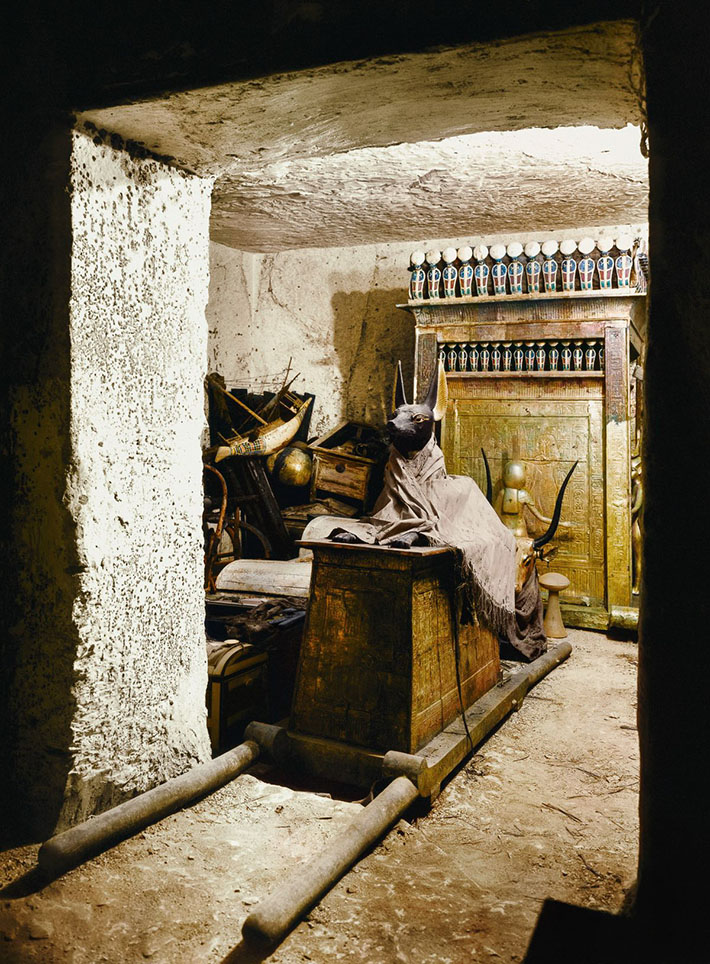 Carter, Callende, and two workers remove the partition wall between the antechamber and the burial chamber.
Dec. 2, 1923 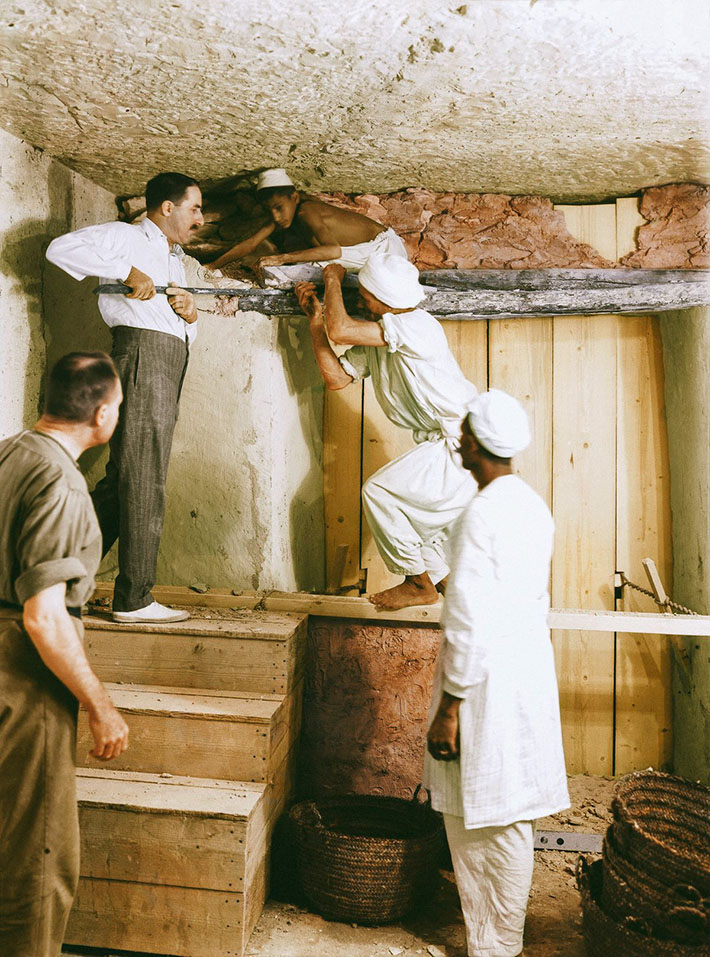 Inside the outermost shrine in the burial chamber, a huge linen pall with gold rosettes, reminiscent of the night sky, covers the smaller shrines within.
December 1923 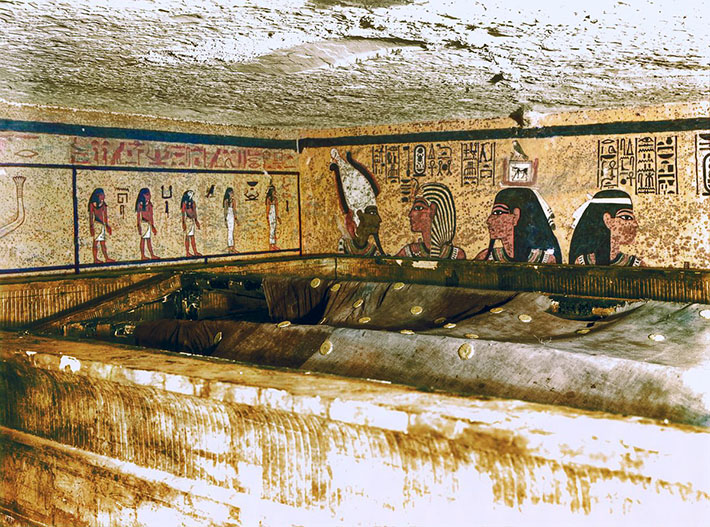 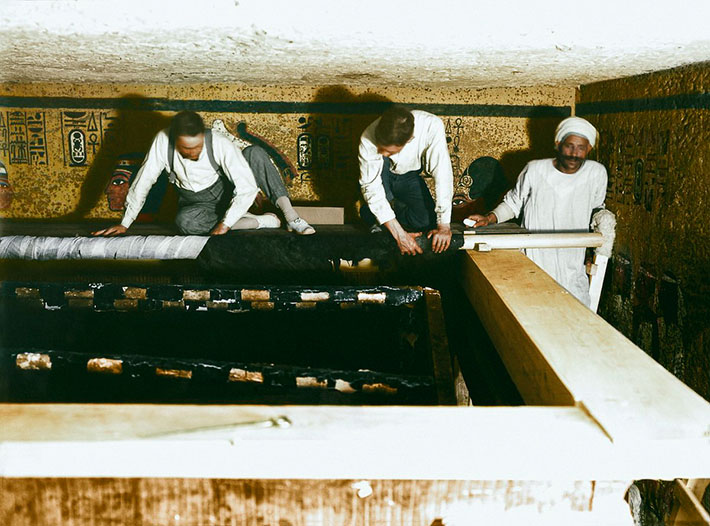 Carter, Callender and two Egyptian workers carefully dismantle one of the golden shrines within the burial chamber.
December 1923 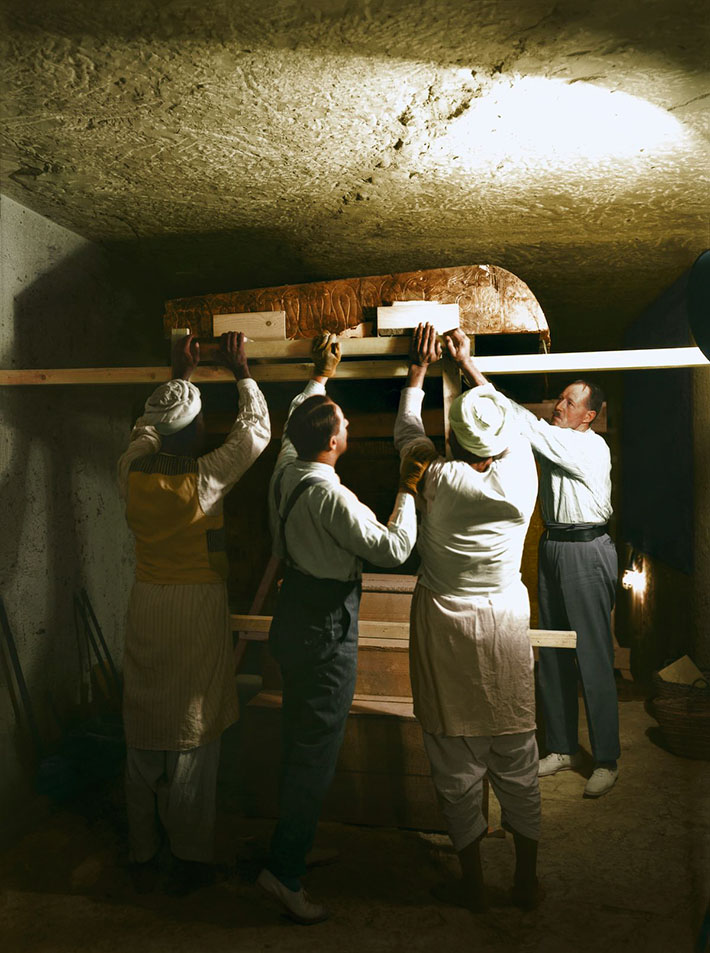 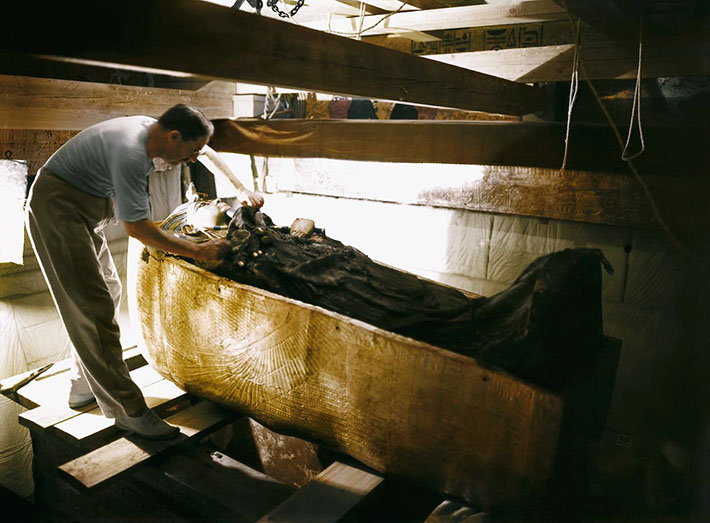 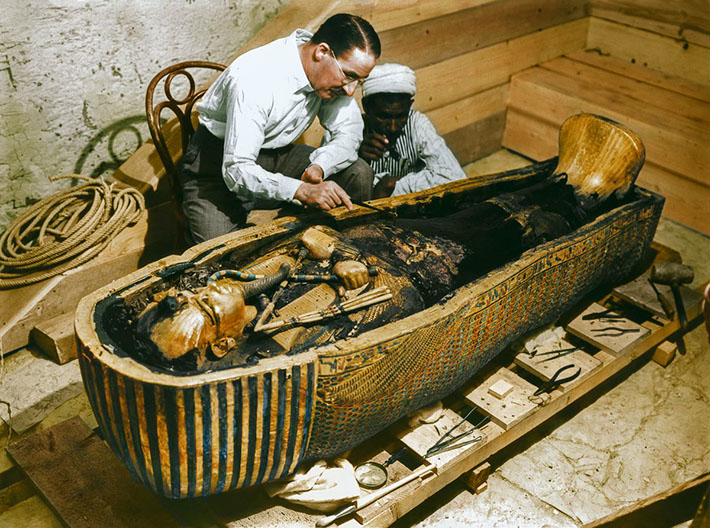