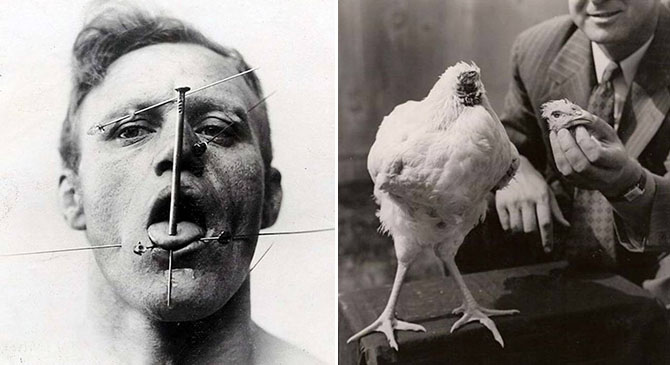 The circus that we know today wasn’t always as happy and colorful. In the past, circus organizers would hire people with various physical oddities and hold freak shows to draw in the paying public. These “performers” may have been the stars of the show, but we can’t really say they enjoyed the spotlight since they were often taken advantage of and worked for little to no pay.

Thankfully, such shows have been largely phased out, and for good reason. Here are 20 rare photographs of sideshow performers to provide you with a glimpse of the circus’ not so happy past. Enjoy!

1. These two would eventually become the inspiration for the television series, American Horror Story.

3. This young man was afflicted with Ectrodactyly or cleft hand.

4. Conjoined twins bonded at the torso

6. A girl with four legs

9. This woman was born without arms

11. Annie Jones was one of the most famous bearded women of the freak circus.

13. Some freak shows would pit their subjects against each other in grotesque exhibition matches.

14. Born Minnie Woolsey, Koo Koo the Bird Girl was supposedly “rescued” from a mental asylum and brought into the circus world.

15. The Legless Acrobat and his family.

16. Tattoos used to be considered quite the oddity.

18. A man with elastic skin

19. John Jennings was once considered the modern version of Samson for his incredible strength.

20. Mike the Headless Chicken famously lived for over a year without his head. He was kept alive via a feeding tube.