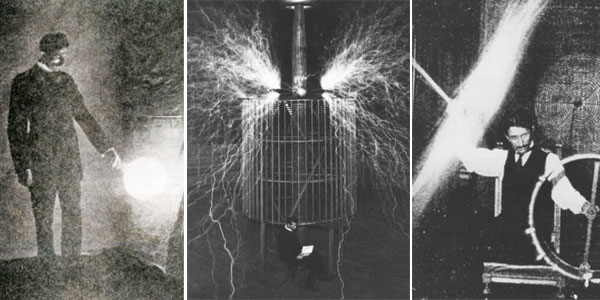 Nikola Tesla (1856-1943) is one of history’s greatest scientists and inventors who helped change our world. He was a brilliant Serbian-born scientist who emigrated to the US, and played a major role in the development of alternating current (AC) electrical systems, through the AC induction motor, transformer, and Tesla coil. He made extraordinary contributions to the fields of electromagnetism and wireless radio communications.

At an early age, Nikola Tesla possessed an eidetic memory with a futuristic vision for mankind. His discoveries and inventions included the modern electric motor, wireless transmission, basic laser and radar technology, the first neon and fluorescent illumination, and the Tesla coil used in radio, television sets, and other electronic equipment.

Although a great inventor, Tesla’s life was shadowed by poverty. He was regarded as a generous and polite person by his friends. But he was a loner all his life because of his firm daily routine. He died penniless. He was undoubtedly one of the most influential inventors of all time whose marvelous works were way ahead of his time and continue to influence our technology even until today.

The inventor standing in the middle of the laboratory and lighting a vacuum bulb by waves from a distant oscillator. His body exposed to great electrical pressure.

First photo ever taken by phosphorescent light. The source of light is one of his phosphorescent bulbs, with 8 minutes time of exposure. January, 1894.

A 1943 Supreme Court decision invalidated Marconi radio patents because of Tesla’s prior work.

The hand of Nikola Tesla taken by his wonderful artificial daylight. This is the first photo made by the light of the future.

A glow of nitrogen fills the atmosphere with Tesla sitting in front of his generator (1899).

An incandescent lamp lighted by means of waves transmitted through space to a coil without a condenser.

During his annual birthday press event.

Tesla working in his office at 8 West 40th Street.

Experiment illustrating the action of a synchronized circuit energized by waves transmitted from a distant oscillator. The energy received is transferred upon another unresponsive circuit, lighting the incandescent lamp attached to the same.

John T. Morris, Victor Beam and Tesla posing with the alternator that had been discovered.

Tesla holding a gas-filled phosphor coated wireless light bulb that he developed in the 1890s, half a century before fluorescent lamps come into use. Published on the cover of the Electrical Experimenter in 1919.

Tesla in his New York City office in 1916. The inventor often crossed the street to Bryant Park to feed the pigeons. The drawings behind Tesla depict his steam engine design.

In his room at the Hotel New Yorker.

Tesla receives the Order of the White Lion from the Czechoslovak governments (July, 11, 1937).

Tesla in 1916 pointing to a discharge in a photograph taken at Colorado Springs in 1899.

Experimenting with currents of High Voltage and High Frequency in 1899.

Tesla sitting near his transmitter in Colorado Springs. The device was capable of transmitting millions of volts of electricity over great distances without wires (1899).

Tesla peeking out of his laboratory in Colorado Springs (1899).