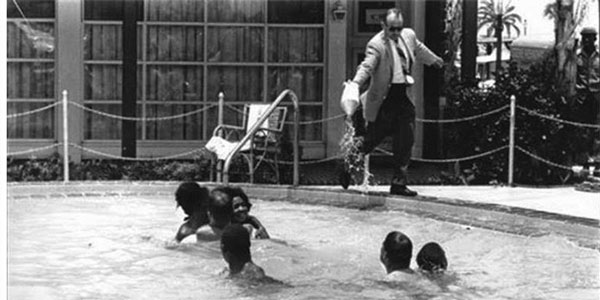 One of the most controversial photos in history is that of James Brock, the motel manager, pouring acid into the water while black people were swimming in his pool. The photograph was taken by Horace Cort in the Monson Motor Lodge swimming pool on June 18, 1964.

The famous photo actually shows a group of white and black integrationists while staging a protest in 1964. The protest was connected to the St. Augustine Movement, named after the town in Florida where it took place. Many peaceful protests and demonstrations were responded to with violence, leading to more complicated protests.

Here is James Brock photographed pouring muriatic acid into the pool to get the protesters out of the pool. 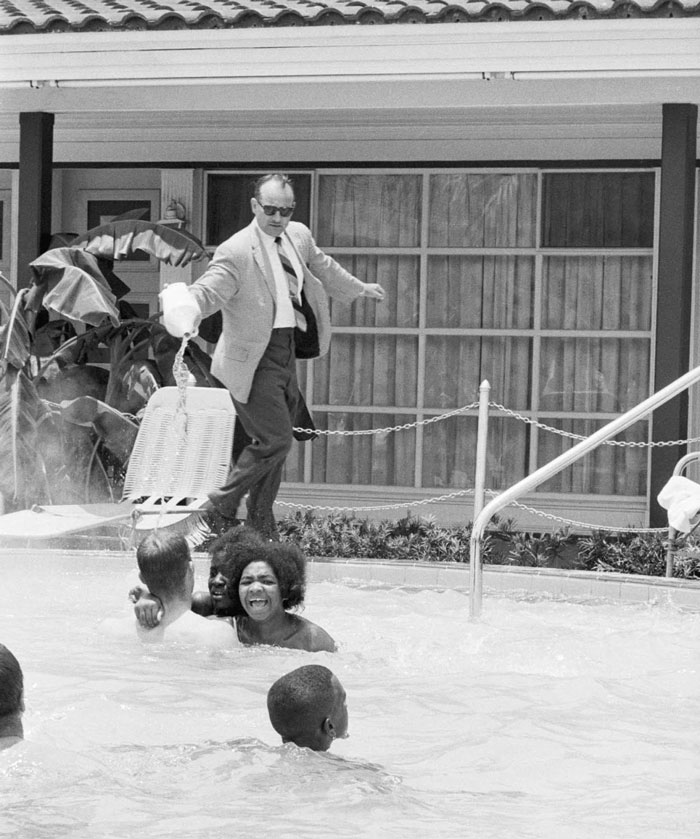 On June 11, 1964, Martin Luther King, Jr was arrested for trespassing at the Monson Motor Lodge after being asked to leave from its segregated restaurant. This spurred on a group of protesters, black and white, to jump into the pool as a strategically planned event to end segregation at motel pools, designated as “White Only”. White people who paid for motel rooms invited blacks to join them in the motel pool as their guests. This swim-in was planned by Dr. Martin Luther King, Jr and his associates.

In an effort to break up the party, the motel manager Jimmy Brock poured a bottle of muriatic acid into the pool to scare the swimmers, and hopefully leave the premises. One of the swimmers, who knew the ratio of acid to pool water was so great it would not be a threat to them, drank a handful of the pool water to calm the other swimmers’ fears.

Many people from that time remember Brock as more the victim in the acid incident.

After the incident, many people from that time believed James Brock was more of the victim in that acid incident. That unfortunate event left an indelible, unwanted legacy.

“Jimmy kind of caught the brunt of it. He was a nice guy,” said Eddy Mussallem, his longtime friend and fellow hotelier. “They had to pick a motel, so they picked Jimmy’s motel. I always told him he did a foolish thing”. James Brock was pressured into fighting integration by civil rights groups and militant whites.

The Monson Motor Lodge and swimming pool were demolished in March 2003, despite five years of protests, eliminating one of the nation’s landmarks of the Civil Rights Movement. A Hilton Hotel was built on the site.