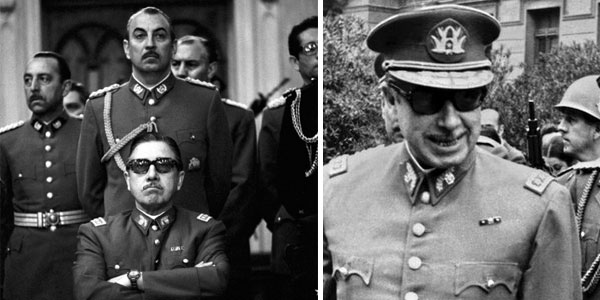 It was a time when most of South America was ruled by dictators, and an archetypal example of them was Chile’s Augusto Pinochet, who cemented his image as a thuggish autocrat very early on in his reign, which began with an American-backed coup which deposed Salvador Allende 1973. 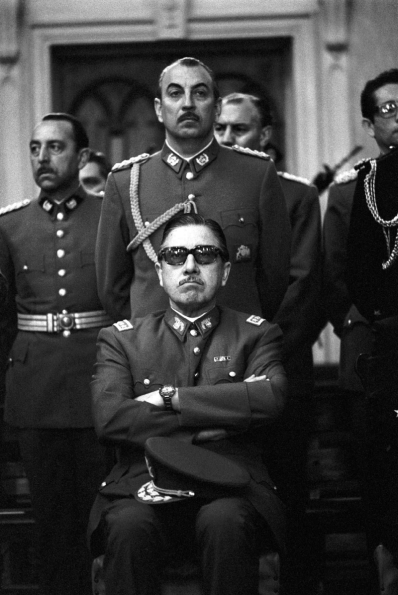 On September 18, six days after the coup, at Iglesia de la Gratitud Nacional, a Te Deum was held to consecrate the new government. All three living presidents endorsed the Pinochet junta (Allende having taken his own life on the day of the coup), as did the supreme court.

The cardinal archbishop of Santiago led the mass, having previously refused to conduct Te Deum at a military school. 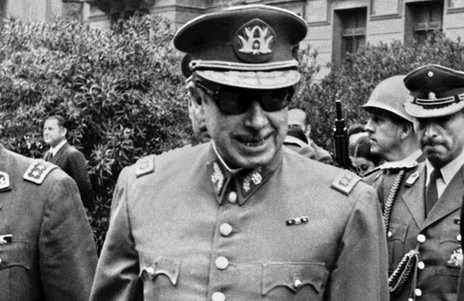 Pinochet showed up to the mass wearing dark glasses, and posed for the press. The photo above taken by Chas Gerretsen was widely re-printed on local and international papers and became popular among both the general’s supporters and opponents. Gerretsen, a Dutch-born war photographer who won the Robert Capa Gold Medal for this photo and who would later be arrested by the Pinochet regime for taking a picture of the general drinking at a press conference, remembers the day:

There was a press pass, where the press was invited to photograph the junta. I did not want to cover another of those things, so I did not register, but an hour before I said: “I have nothing to do, why don’t I go?” So I went and when I got to the street of the Church where they were doing the ceremony, there were soldiers everywhere: on the street, on the roofs. And they would not let me through. Then one of Pinochet’s men recognized me and said to let me pass. And at the next stop they stopped me again and they let me pass again and so on until I got to the church with another 10 or 15 photographers and cameramen.

The junta was all sitting with their assistants and I arrived and I started taking pictures one by one right in front of them. Other photographers took pictures of open angles. I think maybe they were afraid to get too close to the generals. If you see the photos you will see that I went one by one taking pictures and the only striking photo is that of Pinochet. It is the Hollywood dream of a dictator. That’s why people like the photo, because it portrays it as what it is. If you see the picture of General [Gustavo] Leigh, for example, he is also sitting on a chair, I think he also has his arms crossed and is wearing glasses, but he looks weak, like nothing. Like most other generals, he is a follower.”

Gerretsen requested Pinochet to take off his sunglasses, but the general refused, however, with the words: “I am Pinochet.” Later, he told Maria Eugenia Oyarzun, a journalist writing the book Augusto Pinochet, Dialogues with his History that, “The reason for the shades was simple. It was a way of telling things. Lies are discovered through the eyes, and I lied often.”

Two days after the mass, Pinochet gave a press conference, where he claimed that once the country recuperates and overcomes chaos, the junta will hand power back. Instead, Chile languished under his dark glasses for another 17 years.