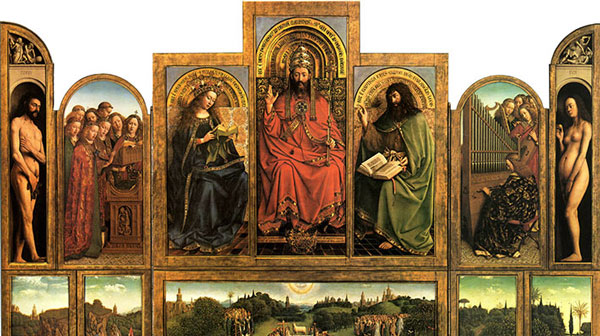 Found in an attic in Toulouse, France, is an amazing Caravaggio’s painting which was reported stolen. It was believed that the art piece was brought in the country by a former officer of Napoleon’s army. It was abandoned in an storage room for more than 150 years, and was discovered by accident. The painting’s worth is almost 120 million Euros (around 135 million dollars).

This particular Caravaggio’s work is an incredible discovery. Today, there are dozens of very rare and highly valuable paintings, reported stolen or just disappeared without a trace, that are still remained to be discovered out there.

Bellow are five of the most wanted works of art included in the register of missing art treasures:

The disappearance of Freud’s portrait of Francis Bacon is quite unusual. For 25 years, there has been no information about its possible whereabouts, although usually criminal gangs give few clues and ask for ransom.

Freud himself published the news about the portrait being stolen with a reward for anyone who knows something about it. It is believed that the portrait was taken from the National Gallery in Berlin by one of Bacon’s fan or student, because during the moment of its disappearance, there were a lot of young people in the building.

Rembrandt’s The Storm on the Sea of Galilee
Lost: 1990

The Storm on the Sea of Galilee was one of 13 works of art stolen from Isabella Stewart Gardner Museum in Boston. It was one of the largest art thefts in the US as well. After more than 20 years, the Federal Bureau of Investigation is still investigating the theft and offers 5 million dollars for any information for its recovery.

The artwork was stolen by two thieves posing as police officers, who were admitted to the museum by guards. They managed to handcuff the guards and locked them in the basement.

Jan Van Eyck’s The judges of the Ghent altar.
Missing: 1934

This picture in the Belgium Saint Bavo Cathedral was part of a broad and complex polyptych called the “Ghent altar.” The piece was stolen April 1934. The thieves even left a message: “Taken from Germany by the Treaty of Versailles.”

A ransom was demanded too, but the bishop of Ghent refused to pay. Subsequently, a number of attempts to establish negotiations were started with letters, but this didn’t lead anywhere to its recovery.

This 16th century oil painting disappeared during the Second World War. In 1939 the picture was saved from the Czartoryski Museum in Krakow. The Gestapo had taken the art piece to decorate Adolf Hitler’s residence.

In 1945, a senior Nazi officer Hans Frank carried Fuehrer’s art collection to the Royal Wavell Castle. That was the last time the painting was seen.

This painting was hung in the San Lorenzo oratorio, in Palermo, Sicily, in 1969. Then it suddenly disappeared. The top suspects of the theft were the local mafia, but the whereabouts of the 17th- century masterpiece still remains unknown.

They heard rumors that the art work is hidden in one of the farms in Sicily, or eaten by rats. However, one of the mafia’s informants recently told the authorities that the painting was burned in the 80s. But it was not confirmed.

If you ever get lucky and stumbled upon these amazing lost paintings, call the authorities immediately. But the possibilities of ever finding them is pretty small but the rewards are huge! But there are other ways to get your rewards, too.

In fact, we would like to recommend you another way on how you can get rewards without being a detective – with these fantastic Amazon promo codes you can not only shop for everything that is on Amazon for sale, but also save a lot of money easily. Usually, those coupons work on such things like art pieces too, so if you want to decorate your house with something unique – don’t overpay and just shop online cheaper!