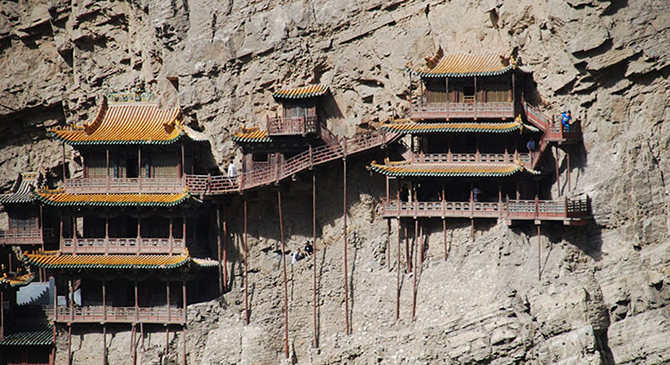 Monasteries, being holy places where monks live and worship, are usually secluded and located in places far from the comforts of the modern world. While some keep reasonable distance from towns and cities, there are others which are determined to let only the most dedicated followers reach their holy place. Here are 5 of the most inaccessible monasteries in the world.

Built on natural sandstone pillars, the Monasteries of Meteora is a group of six monasteries located over 400 meters above the Penes Valley and the small town of Kalambaka on the Thessalian plain. The Meteora (Greek for “suspended in the air” or “in the heavens above”) is known as the largest and most important complexes of Eastern Orthodox monasteries in Greece. 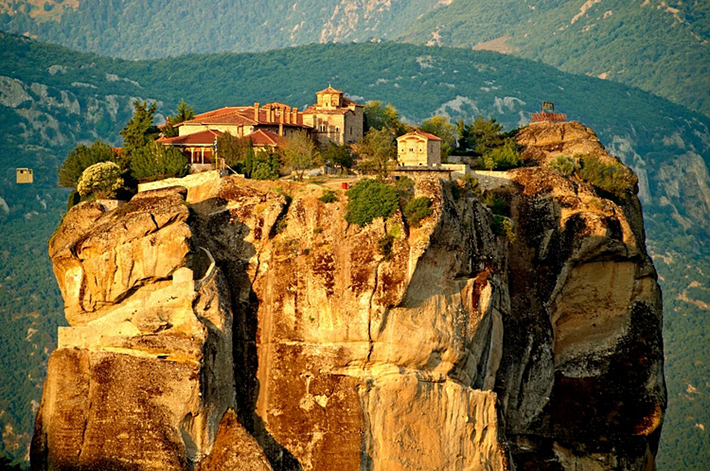 During a time of political instability in the 14th century, the monasteries were systematically built on top of the towering peaks, making them the most powerful examples of the architectural transformation of a site into a place of retreat, meditation, and prayer. 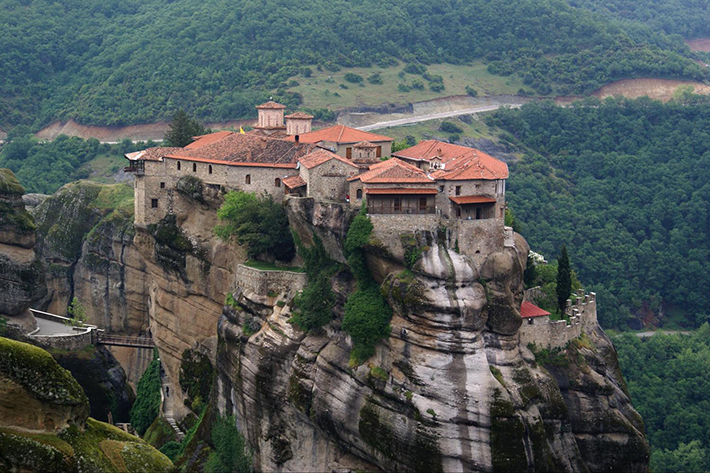 By the end of the 15th century, there were 24 of them which continued to flourish until the 17th century. Today, only four monasteries – Aghios Stephanos, Aghia Trias, Varlaam and Meteoron – still house religious communities. 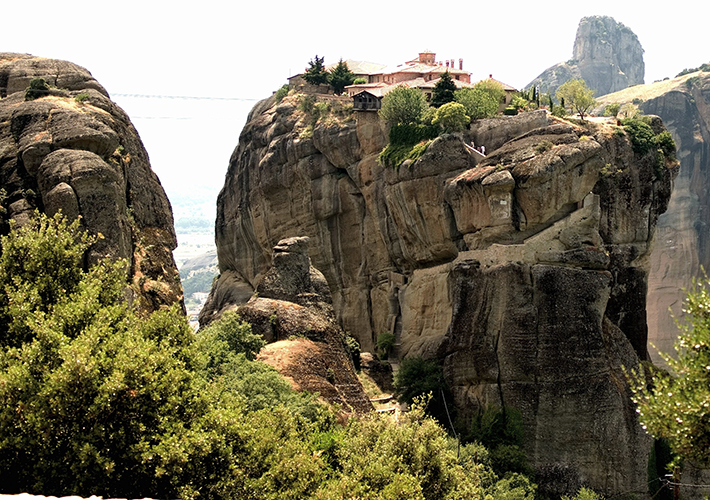 Access to the Meteora was originally designed to be deliberately difficult. It required either long ladders lashed together or large nets to haul up both goods and people. 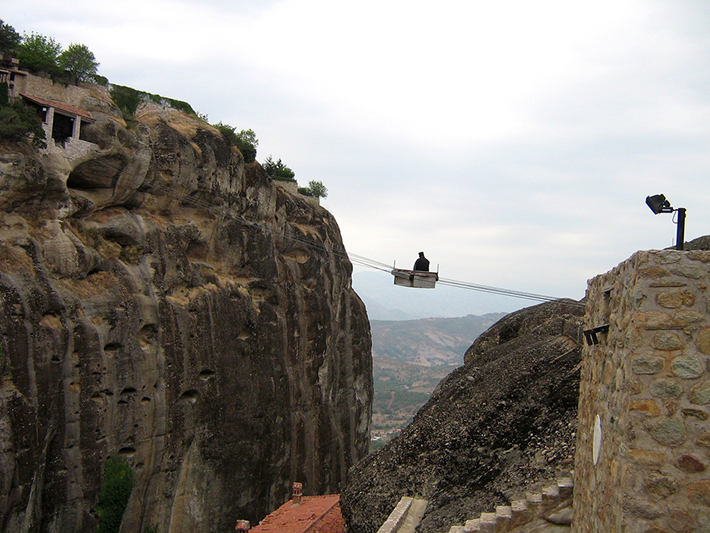 The story goes that only “when the Lord let them break” were the ropes replaced. The arrangement saw a bit of improvement in the 1920s when steps were cut into the rock to make the complex accessible via a bridge from a plateau nearby. 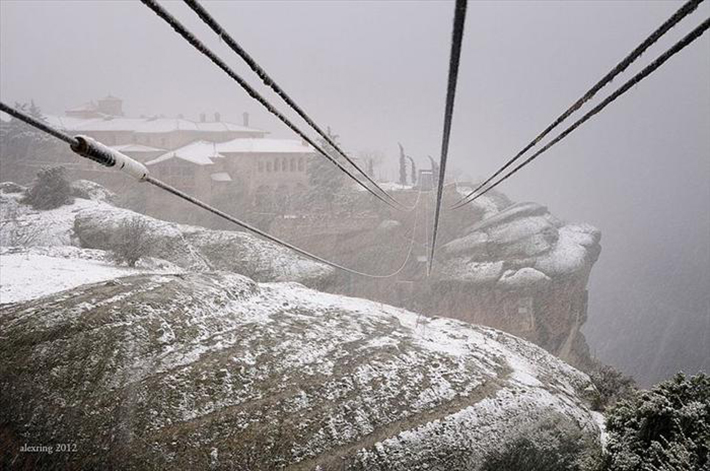 Located on top of a volcanic plug, 737 meters above the central Burma in Myanmar, sits the Tuang Kalat Monastery. Tuang Kalat may not be as inaccessible as The Meteora but it’s no cake-walk either as visitors will have to climb exactly 777 steps to actually reach it. 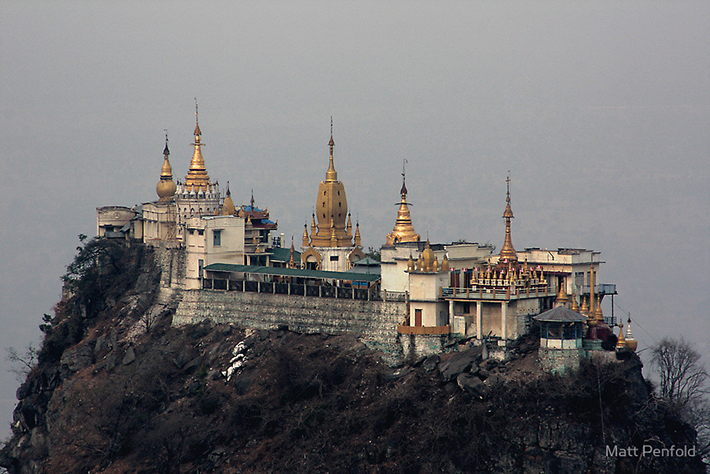 Those who reach the top are rewarded by a stunning view: to the north-west is a view of the distant temples of Bagan and to the east is the towering Taung Ma-gyi summit. There’s also a big caldera (610 meters wide, 914 meters deep) making the mountain take various forms with more than one peak. Taung Kalat is also home to many Macaque monkeys which has become a tourist attraction. 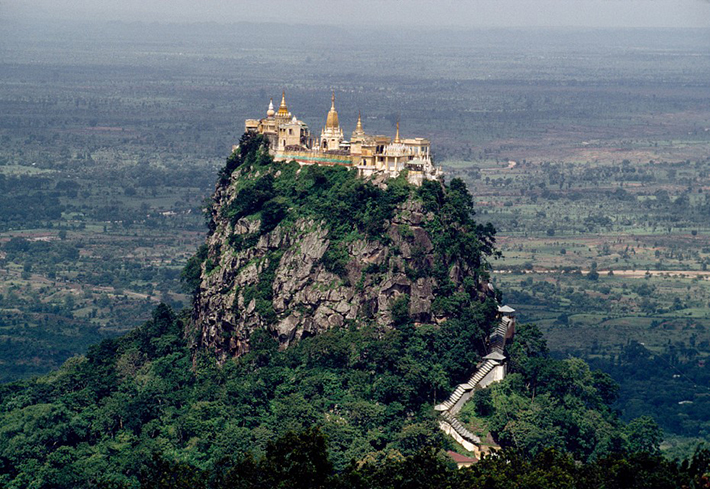 Also known as the Tiger’s Nest, Paro Taktsang (the popular name of Taktsang Palphug Monastery) is located in the cliffside of the upper Paro valley in Bhutan. 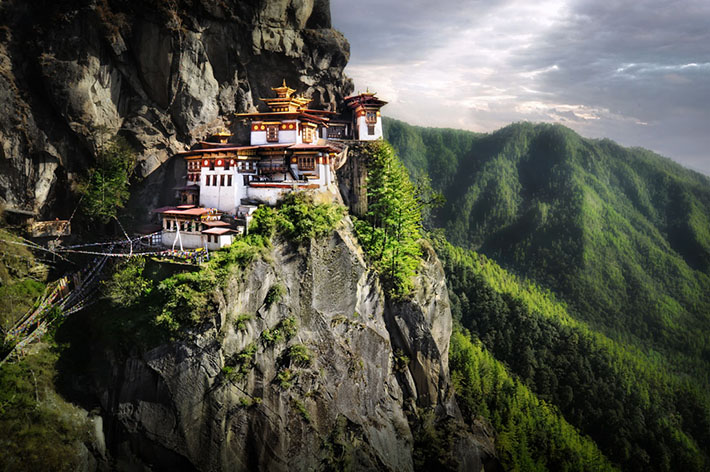 The monastery buildings are built into the rock face of the cliff’s very steep, almost vertical rock slopes. 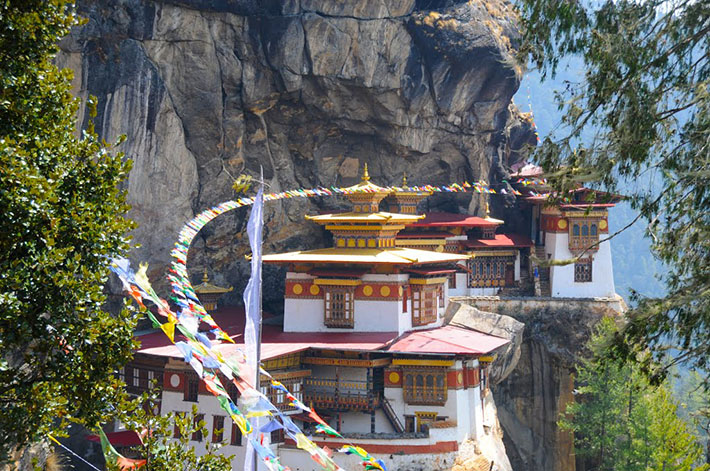 Although this prominent Himalayan Buddhist sacred site and temple complex looks formidable, it is actually accessible from several directions including a northwest path through the forest and a path along the south which is used by devotees. 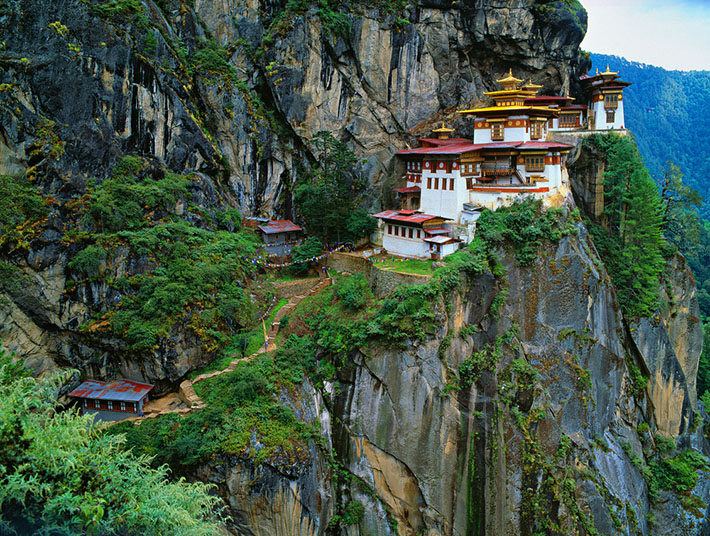 Built into the rock cliffs of the Altmdere Valley in Turkey, The Sumela Monastery has, over the years, become a major tourist attraction of Altındere National Park. 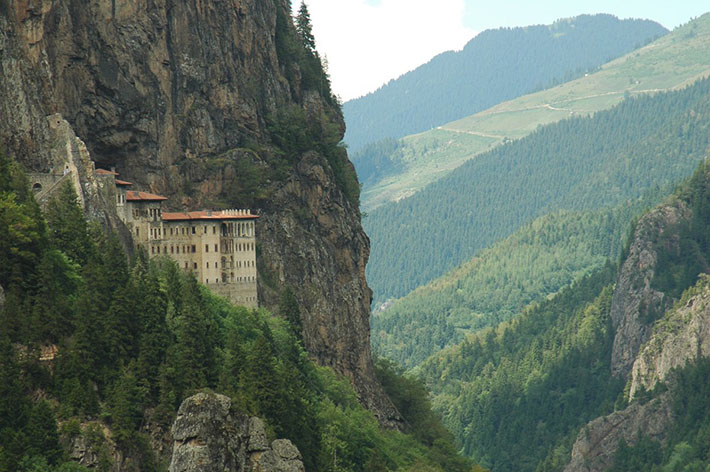 Founded during the reign of Emperor Theodosius I in 386 AD, legend has it that two priests undertook its creation after discovering a miraculous icon of the Virgin Mary in a cave on the mountain. Sumela Monastery has fell into ruin several times and was restored by various emperors. 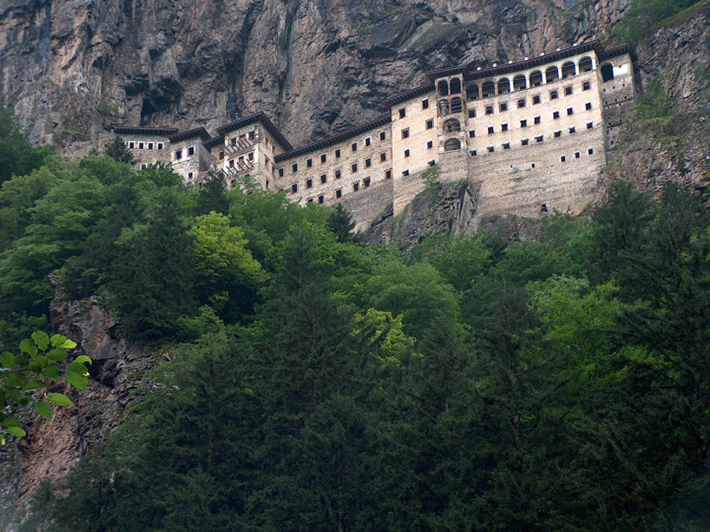 The monastery reached its present form in the 13th century during the reign of Alexios III, but was abandoned after World War I. 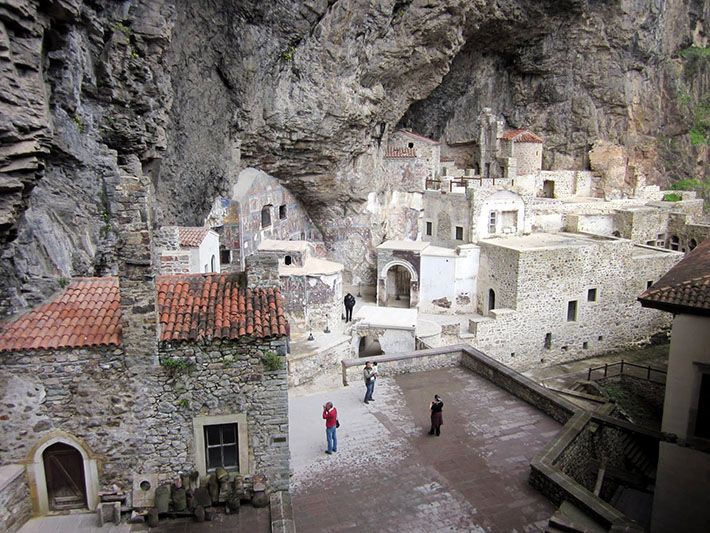 It lay empty for decades until it was partially restored as a museum. 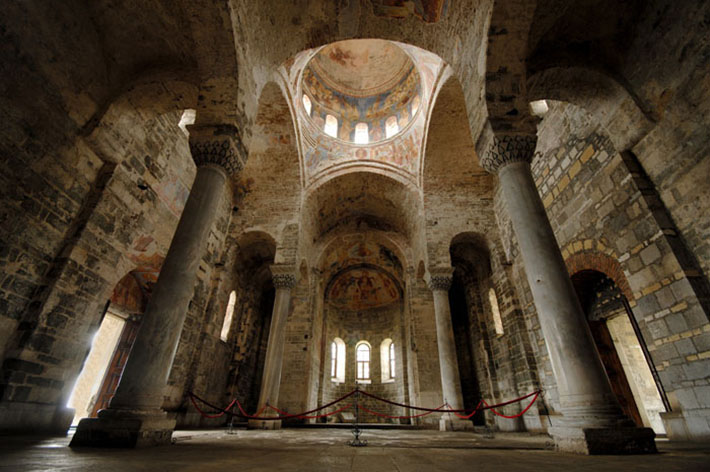 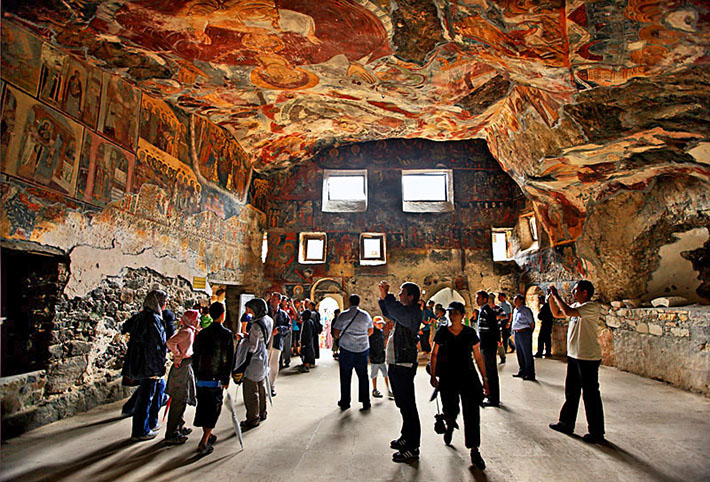 The Hanging Monastery (also known as Hanging Temple) of China is located in a canyon at the foot of the Mountain Heng in the province of Shanxi. 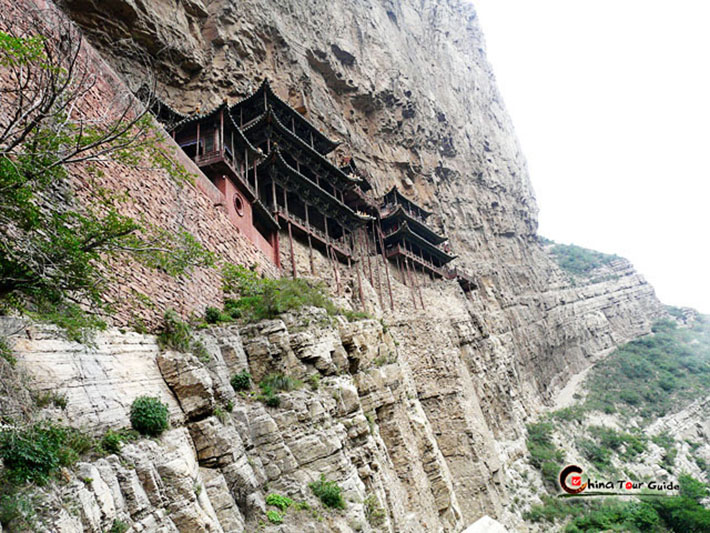 The temple is built into the cliff side about 75 meters above the ground. It is propped up by hidden rocks corridor and wooden beams inserted into the mountain. The temple’s unique design and location is so it can avoid the terrible flood and use the mountain as protection from the rain, snow, and sunshine. 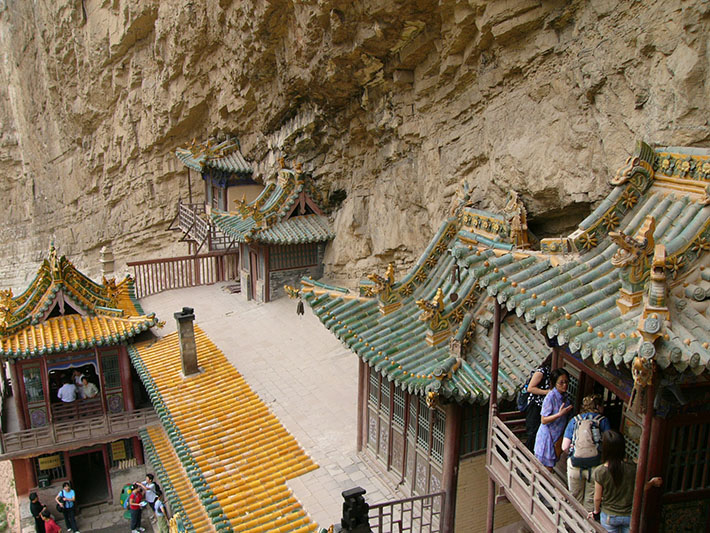 Its halls, cabinets, and pavilions are connected by corridors, bridges and boardwalks. Over 80 bronze cast statues, iron cast statues, and clay sculptured statues and stone carvings from different dynasties are housed inside the temple. 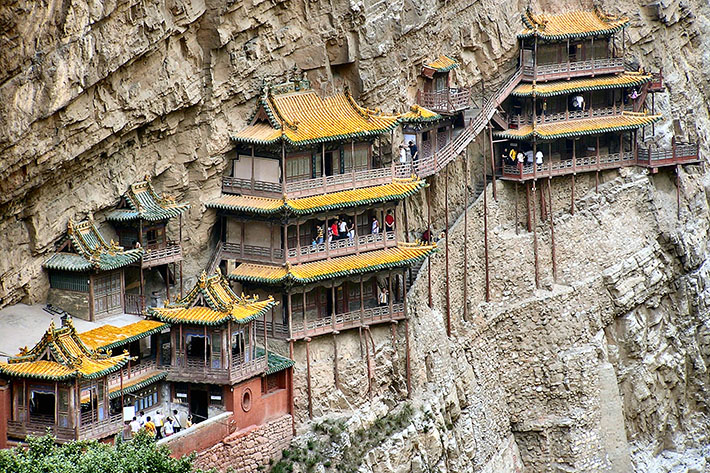 The Hanging Monastery is one of the main tourist attractions and historical sites in the Datong area today. 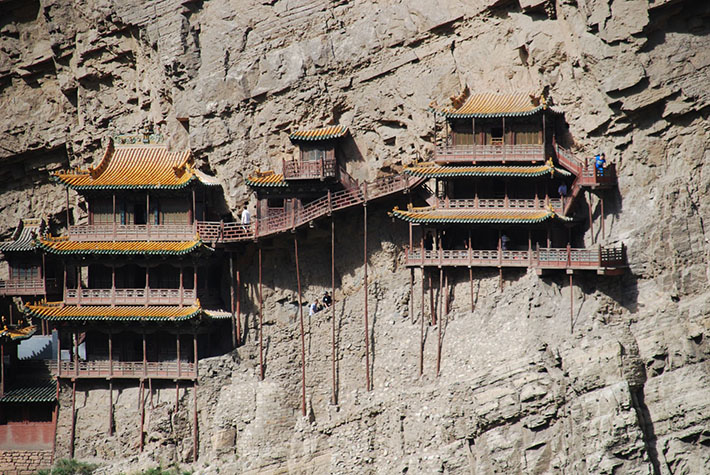