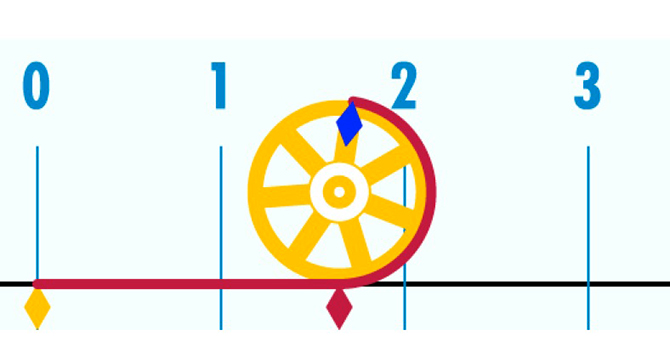 Math is tough, that’s a fact. Math has been the “downfall” of many students – that’s another fact. There is simply no getting around learning it – or so we thought.

Check out these 21 cool GIFs that can help you visualize some tricky aspects of math. Bet you’ll ace your next exams with these.

1. “If an arc of a circle is the same length as its radius, the resulting angle is one radian:”

2. “Visualizing sine (red) on the Y axis and cosine (blue) on the X axis. The relative position of the circle is shown in black:”

3. “This shows the same thing, but a bit more simply:”

4. “Here’s how sine and cosine apply to triangles:”

5. “Cosine is the derivative of sine:”

6. “Converting a function from Cartesian to Polar coordinates:”

7. How to draw a parabola

8. “Use FOIL to easily multiply binomials:”

9. How to create an ellipse

11. “Translating that into 3D, you get a hyperboloid. Believe it or not, it’s made with completely straight lines:”

13. “Use this trick so you don’t get mixed up when doing matrix transpositions:”

14. “If you’re studying trig, you better get pretty comfortable with circles. Check out this visualization that shows what you’re really looking at when you deal with pi:”

15. “Exterior angles of polygons will ALWAYS add up to 360 degrees:”

16. “What the Pythagorean Theorem is really trying to show you:”

17. “The Riemann sum is the approximate area under a curve:”

18. How to solve logarithms:

20. “Flipped on its side, the shape begins to make more sense:”