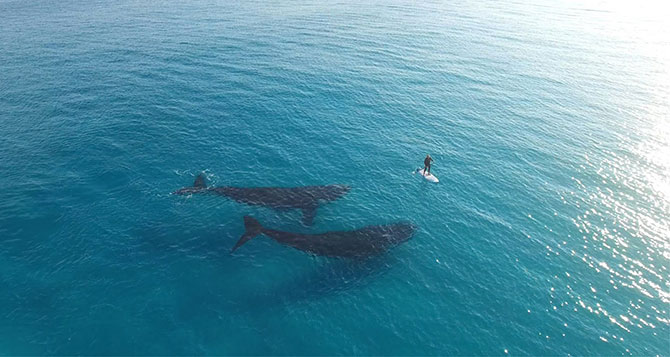 It doesn’t happen often that man encounters these leviathans of the sea and vice versa. While there have been reported incidences of such, but with tragic consequences, this one left both sides unsure of what to make out of it.

Watch video. You will be deeply affected, and thankful, to have seen such face-off ending happily for both man and whales.

This video was taken off the coast of Esperance, Australia by Jaimen Hudson using a DIJ Phantom 3 drone.

Hudson is a paraplegic resulting to a motorbike accident, and took up drone-flying as hobby to occupy his mind.

This was, of course, taken accidentally but earned him lot of praises from netizens. It must have made him wish that he should have flown drones before rather than drove motorbikes.

Anyway, there is a reason for everything and definitely, this video must have made Hudson realize that by now.

The man and the whales? David Price, the paddleboarder caught on video, must have thanked high heavens after the encounter that the whales did not get up for the wrong side of the bed that morning.