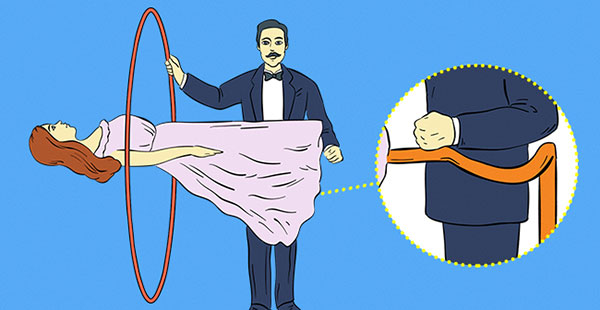 No thanks to the magician’s code, magicians really can’t share the truth behind their magic tricks and illusions. But over years, the secrets to some of their highly-guarded tricks have come out. Here are some of them… Enjoy!

1. The Woman Sawed in Half
This illusion is an old classic and one you could probably see in almost every magic show. It’s also quite easy to see through the ruse. I mean, cut in half but no blood? Please.

There are, however, 2 variations on this trick;

As to which one’s more convincing, we’ll have to go with the latter, being that the second woman can move her legs around and make the act seem realistic.

In the first, a clear glass support is used on one end of the board she’s lying on. As the glass is raised, the woman appears to levitate.

In the second, the board is raised using a metal rod. The key of the illusion is for the magician to stand just right to conceal the rod.

3. The Zig-zag Woman
The zig-zag trick takes the woman sewed in half illusion a step further. A variation of the classic illusion, blades are used in the zig-zag to cut a woman in three parts with the severed mid-section moved off to the side. Creating the illusion that that there’s less usable space in the box than there is, the woman then contorts herself into the space that remains.

4. The Seated Levitation
This clever illusion is often used by street magicians and it’s quite tricky to figure out. It will boggle your mind how a staff can support the magician’s whole weight. But apparently, there’s a metal frame across the shoulders and down the arm of the jacket to help hold him up.

5. The Micheal Jackson-style dance move
To pull off this illusion, a special catch in the heel of the shoe is attached to a lift which allows the performer to lean over their center of gravity and then effortless stand back up straight, rather than face-plant into the floor.