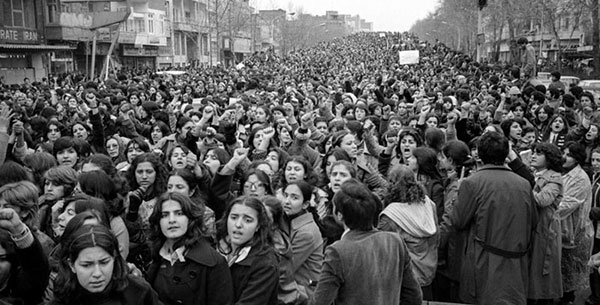 The day more than 100,000 Iranian women protested the head scarf days after the 1979 Revolution.

This seldom-seen collection of photographs was taken in Tehran in 1979, showing the struggle of the women movement in Iran.

On March 8, 1979, thousands of women gathered on the streets of the capital of Iran to protest against the new Islamic government’s compulsory hijab ruling. This ruling demanded that women would henceforth be required to wear a headscarf when away from home. The protest was held on International Women’s Day, and the photographs you see below show women from all walks of life — mothers, nurses, students — marching with their arms raised in protest. 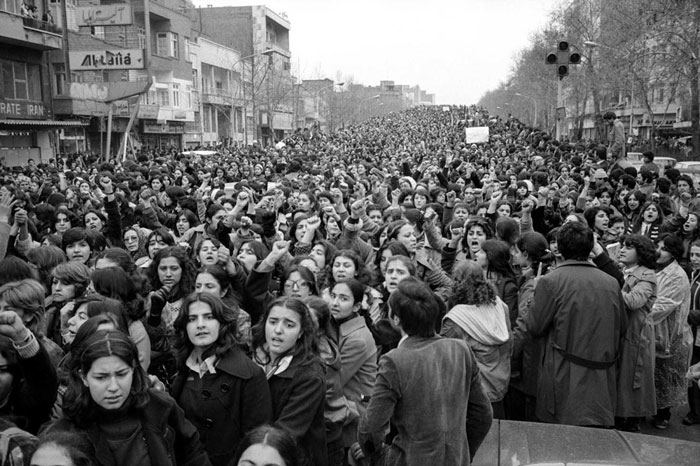 Under the new Islamic Republic of Iran, the leader Ayatollah Khomeini curtailed rights that women had become accustomed to under the Shah. The 1967 Family Protection Law was repealed, which meant female government workers were now forced to follow the Islamic dress code. Women can no longer become judges in court. Beaches and sports centers were now sex-segregated. The legal age of marriage for girls was reduced to 9 (this was later raised to 13). And married women were disqualified from attending regular schools.

After pronouncement of these new policies, women immediately raised to protest. Since then, many places from “schoolrooms to ski slopes to public buses” are strictly segregated. 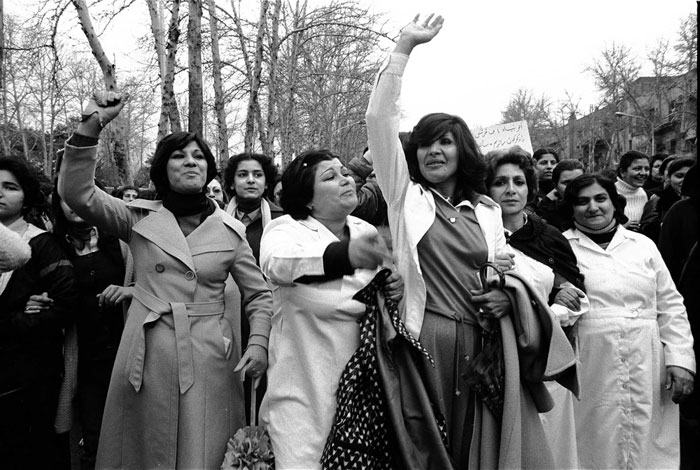 At the time, the photographer Hengameh Golestan who took these photos recalled that the Iranian people were strongly “politically charged” and thought change could be effected by demonstrating in the streets. 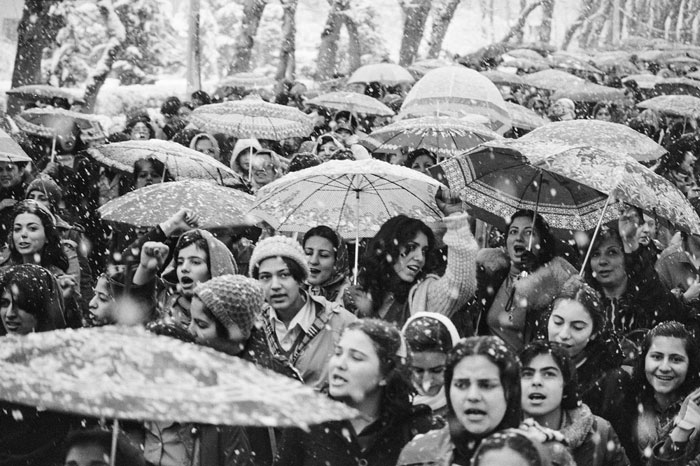 “The dress needs to be appropriate according to the Islamic custom of hijab (veil): women are not required to be veiled in front of mahramrelatives such as husband, father, son, brother, but are required to be “modest” if they are likely to be seen by na-mahram males”.

Today in Iran, the hijab includes choosing either a chador or a roopoosh and veil. Chador is a modest usually black or dark outfit that covers a woman’s head and her body to her feet. The roopoosh or manteau is a long top similar to a trench coat.

“Bad hijab” exposure is subject to punishment of up to 70 lashes or 60 days imprisonment. Bad hijab means exposure of any part of the body other than hands and face. In April 2007, the Tehran police began a fierce crackdown on what is known as “bad hijab” in more than a decade. Thousands of Iranian women were cautioned over their poor Islamic dress and several hundred were arrested. 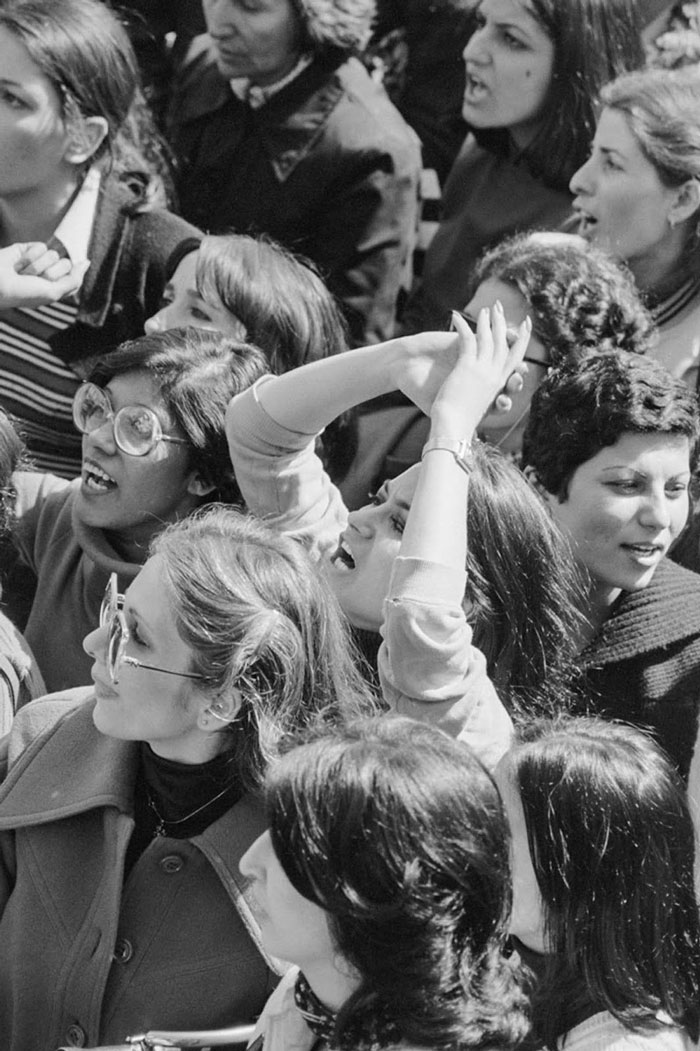 The spontaneous uprising of both women and men on March 8, 1979 was an effort “to protect the achievements of women’s right in the [preceding] 70 years of Iranian history”. 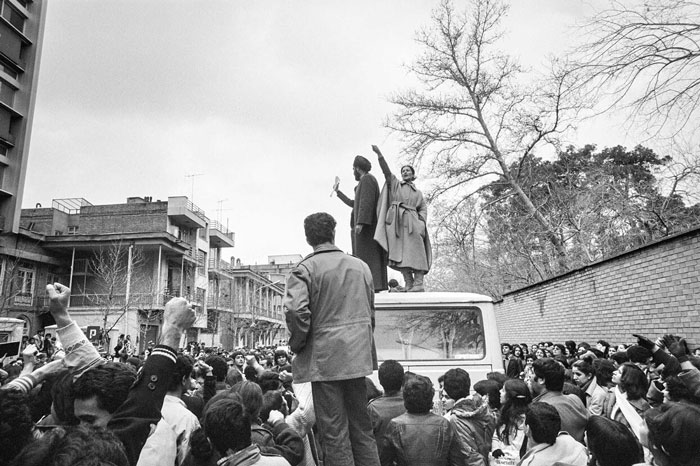 Hengameh Golestan, 64, a pioneer of Iranian photojournalism, remembers the day of the protest well:

“The atmosphere was very joyful,” she recalls, on the phone from London, where she has lived for three decades. “Women went on strike that day, because the night before they had announced in the papers that women should wear scarves when they went to work. So nobody went to work, they all went on strike, came to the streets and from early morning they began to march from the Tehran University.” 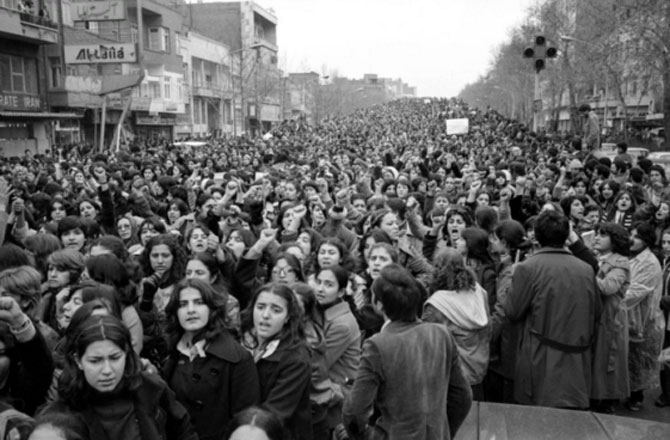 Can anyone who reads Arabic translate the sign in the photo below? 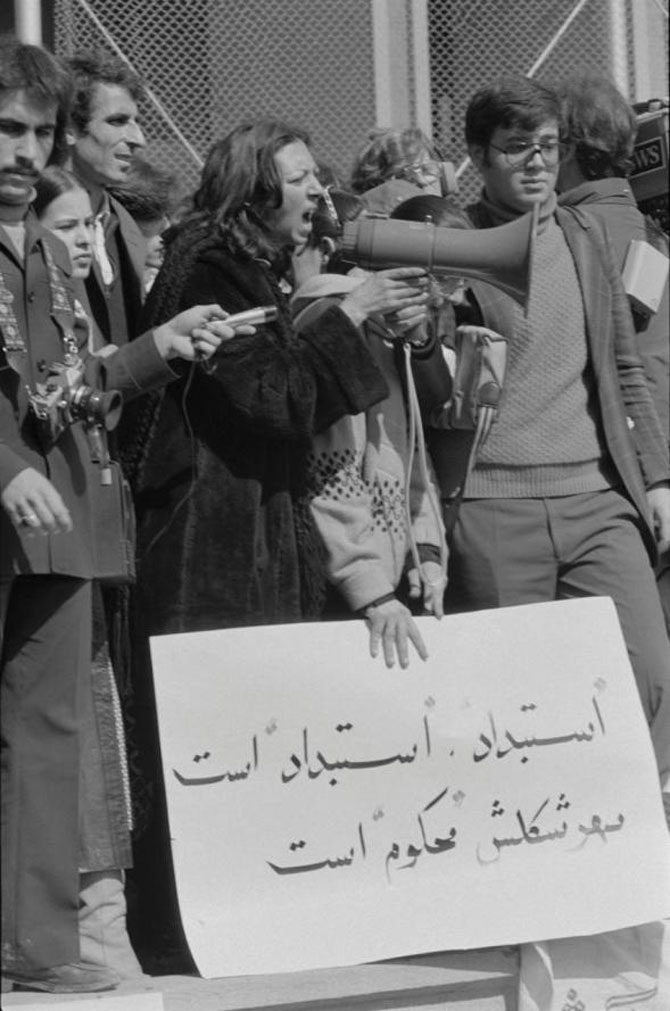 During this time, there were few documentary photographers in Tehran. Sensing the historical importance of the event, Golestan decided to attend as a photographer rather than a protester. Golestan recalls:

“People were not really familiar with that type of journalism. At demonstrations… there were not enough of us [photographers] to be noticed… But taking pictures in the crowd was not easy, most of the time I was running and hiding from the government officials who did not want images to be taken. It was a solo undertaking, the fact that you would have to constantly run and hide made it impossible to go in as a team.” 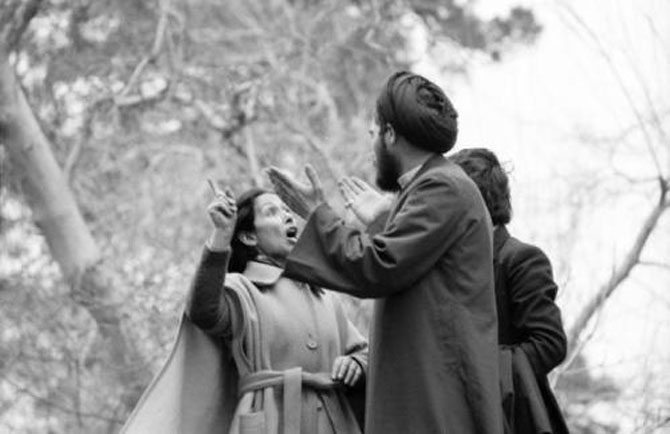