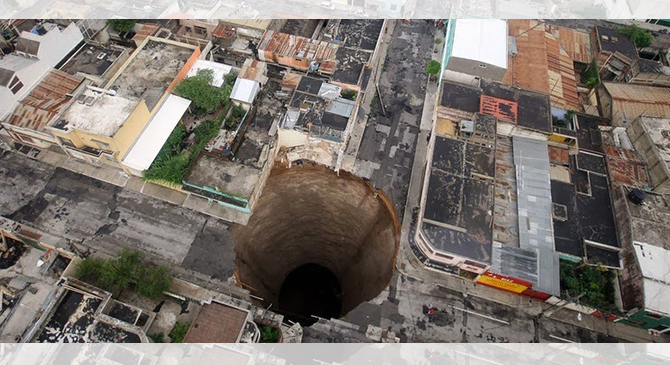 The earth is patient. It sits silently while we abuse its generosity and ruin its beauty. But when the world we live in decides it has had enough, it can strike back in the deadliest way possible. The scariest part? There’s often no telling when it will.

Among those unpredictable natural disasters are sinkholes. Although induced sinkhole development is predictable, naturally developed ones are not and can be pose serious threat. Here are some incredible photographs of sinkholes captured through the years.

1. A giant sinkhole caused by the rains of Tropical Storm Agatha is seen in Guatemala City on May 31, 2010.

2. A damaged road after a portion of it collapsed after storms, near the Palo Blanco village on Spain’s Canary island of Tenerife, November 23, 2009.

3. A large sinkhole opened on East Monument Street in Baltimore in summer 2012.

4. Cars in a sinkhole, caused when a road collapsed into an underground cave system, in the southern Italian town of Gallipoli, March 30, 2007.

5. Local residents inspect a road that collapsed when a flash flood swept through Toowoomba, a town just west of Brisbane January 10, 2001.

7. A car carrying two passengers fell into a sinkhole in Baltimore on April 28, 2004.

14. Workers look into a sinkhole caused by a broken water main in Chicago, Illinois, April 18, 2013.

15. Rescue workers carry out the body of a victim in a road cave-in accident in Shenzhen, Guangdong province, May 21, 2013.

17. March 12, 2008, this sinkhole was caused by a storm that sunk numerous boats and caused extensive damage in the Biscay area.

20. Pamela Knox waits for rescue after a massive sinkhole opened up underneath her car in Toledo, Ohio on July 3, 2013. She was finally rescued with no injuries.

21. A tractor was swallowed by a sinkhole on Saint-Catherine Street in downtown Montreal, August 5, 2013.

24. The debris of a residential building and a destroyed road in the village of Nachterstedt, July 18, 2009. 3 residents are still missing.

26. A tsunami hit in Nagapattinam, a town in the Indian state of Tamil Nadu, December 27, 2004 causing various sinkholes.

27. A sinkhole near Qingquan primary school in Dachegnqiao town of Ningxiang on June 15, 2010. The hole which is 492 feet wide and 164 feet deep, has been growing since it first appeared in 2010 and has destroyed 20 houses so far.

28. A crater, which the Libyan government said was caused by coalition air strikes, is seen at an area in Bab al-Aziziyah compound in Tripoli, May 12, 2011.

29. A truck is in a sinkhole after part of the structure of a bridge collapsed into a river in Changchun, Jilin, May 29, 2011.

30. The damage after a section of a road collapsed in Ostrowiec Swietokrzyski, Southern Poland, December 19, 2012. The sinkhole was 33 feet deep and 164 feet wide.

33. A stranded car is hoisted from a sinkhole in Guangzhou, Guangdong province, September 7, 2008.

35. A view of the damaged Gran Marical de Ayacucho highway in the state of Miranda on December 1, 2010.