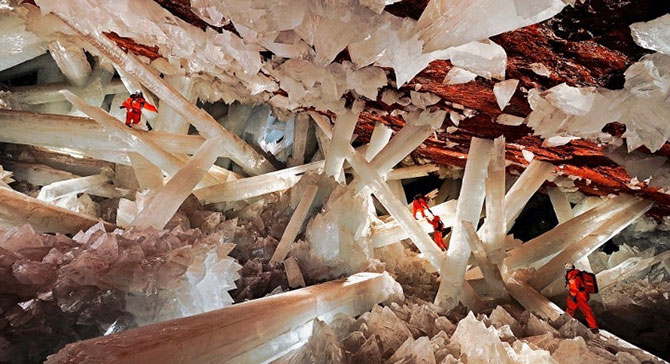 Nature is paradoxical. It creates, and it destroys. And from the wake of its destruction, emerges another creation – wonderful and awesome. Then destroys it again to make another one.

This cycle has been going on since the beginning and will last until the end of days. Here are a few examples of Her masterpieces in their natural best. Appreciate them while they last:

Frozen Bubbles:
These are found in Abraham Lake, an artificial lake in North Saskatchewan, Alberta, Canada. These bubbles are formed from methane gas released by plants in the bottom of the lake. On cold winter months, they freeze as they closer to the surface creating layers of awesome pancake-looking bubbles.

Bioluminescent Lights:
No, these are not starry reflections on the surface of the sea but bioluminescent lights on the shores of Vaadhoo, Maldives.

Bioluminescent lights are produced by certain microorganisms in the water which are disturbed by the presence of oxygen.

Blood Falls:
It got its name from the iron-oxide tainted water coming off the edge of Taylor Glacier, Colorado.

This water drops into the ice-covered surface of West Lake Bonney.

Crystal Cave:
Superman did not find the answers to the question of his origins in this crystal cave.

This one is not in the Polar Region but 290 meters underground in Nacia, Mexico. Not only that. Below, somewhere around 760 meters, is an abundance of zinc, copper, silver and gold.

Underwater Forest in Kazakhstan:
No, this is not a Legend of the Sleepy Hallow movie scene but but a real spooky forest beneath Kaindy Lake, in Kazakhstan.

Lake Kaindy is 400 meters long and is situated in Kasakhstan’s portion of Tian Shan
Mountains, 129 km from the city of Almaty.

The lake was formed when an earthquake in 1911 caused a landslide which blocked a gorged, forming a natural dam. Over time, rainwater filled the valley below, creating the lake.

Volcanic Lightning:
A “dirty thunderstorm” is a weather phenomenon that occurs when lightning is produced in a volcanic plume.

Mirror-like Salt Bed:
Found in Bolivia, it is the largest salt bed in the world, measuring 4,086 sq mi., and is as reflective as a mirror.

Sandstone:
This reminds me of the caramel we made as a child from the thick syrup of cane sugar we scooped off from a large cauldron of boiling cane sap.

This is not caramel, however, but sandstone formation, created by strong winds, along the slopes of Coyote Buttes in the Paria Canyon-Vermillion Cliffs Wilderness, Arizona.

Spider Web:
Spider Man does not live here but would probably find it cozy had it been nearer New York.

These are found in some parts of Pakistan where, due to incessant flooding, made millions of spiders to go up trees and weaved their webs there ultimately covering them with cocoon.

These are found in Chichen, Itza, Mexico.

A lot of us go through numerous hurdles and difficulties, and travel great distances to witness the awesome beauty of Nature’s creations because, more often than not, we cannot see them all around us.

Or we have marred them beyond recognition due to our destructive ways. Don’t you think it’s time to let Nature do things to its own bidding?