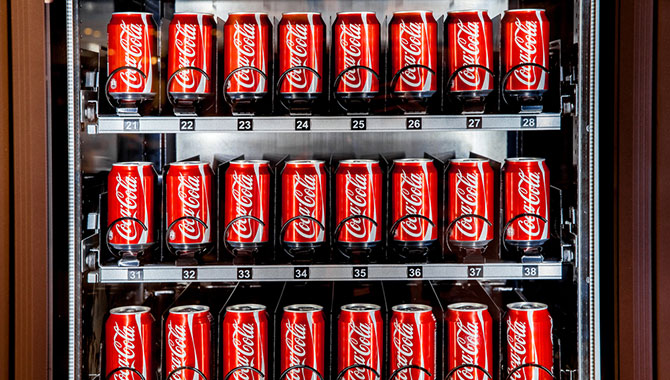 Most of us know drinking Coke isn’t good for us. But what really happens to our body after drinking a can of this sugar-laden beverage?

It’s really pretty eye opening. A detailed infographic from TheRenegadePharmacist.com breaks it down for us, step by step and, well, you may reconsider picking up a can again.

The infographic describes how the sugar, caffeine and other ingredients contained in a can of Coca-Cola affect our body 60 minutes after consumption. 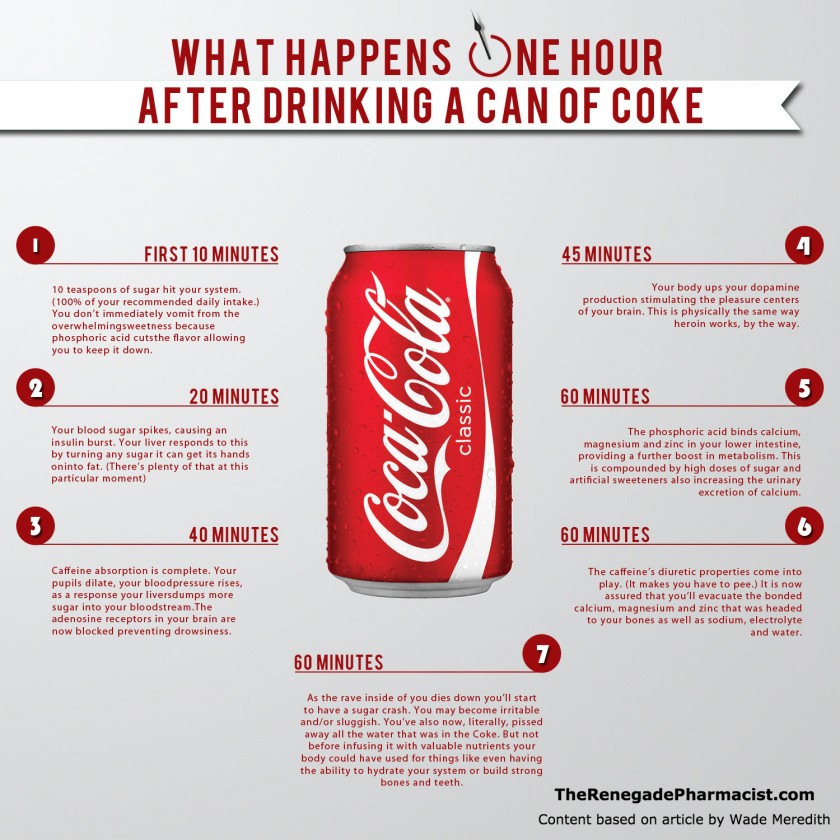 10 teaspoons of sugar hit your system. (100% of your recommended daily intake.) You don’t immediately vomit from the overwhelming sweetness because phosphoric acid cuts the flavour, allowing you to keep it down.

Your blood sugar spikes, causing an insulin burst. Your liver responds to this by turning any sugar it can get its hands on into fat. (There’s plenty of that at this particular moment)

Caffeine absorption is complete. Your pupils dilate, your blood pressure rises, as a response your livers dumps more sugar into your bloodstream. The adenosine receptors in your brain are now blocked preventing drowsiness.

Your body ups your dopamine production stimulating the pleasure centres of your brain. This is physically the same way heroin works, by the way.

The phosphoric acid binds calcium, magnesium and zinc in your lower intestine, providing a further boost in metabolism. This is compounded by high doses of sugar and artificial sweeteners also increasing the urinary excretion of calcium.

The caffeine’s diuretic properties come into play. (It makes you have to pee.) It is now assured that you’ll evacuate the bonded calcium, magnesium and zinc that was headed to your bones as well as sodium, electrolyte and water.

As the rave inside of you dies down you’ll start to have a sugar crash. You may become irritable and/or sluggish. You’ve also now, literally, pissed away all the water that was in the Coke. But not before infusing it with valuable nutrients your body could have used for things like having the ability to hydrate your system or build strong bones and teeth.

The facts seem legitimate, according to one dietitian, until you focus in on the actual figures used. She pointed out over “40 minutes” claim, which is highly unlikely that a can of Coke could make the pupils dilate within this timeframe. One can of Coke contains 34 mg of caffeine capable of triggering the release of adrenaline, but it’s significantly less than what you’d get in a large cup of coffee that contains as much as 200 mg.

Without real data and sources to back up the claims, the infographic appears to be another one of those attempts to raise an alarm for Coca-Cola drinkers. They already know, anyway, that the drink is not good for their health. But Niraj Naik of The Renegade Pharmacist is determined to raise awareness and help to change people’s unhealthy habits in order to benefit their bodies in the long term.

On his website, Naik writes: “I discovered that a trigger factor for many widespread diseases of the west such as obesity, heart disease and diabetes could be closely linked to the consumption of one particular substance found in many processed foods and drinks – fructose in the form of high fructose corn syrup. High fructose corn syrup is found in pretty much all processed foods such as ready meals, fast foods, sweets and fizzy drinks and most people are totally unaware of its danger.”

All things considered, it still makes sense for everyone to cut back on sugar and caffeine for a healthier diet.