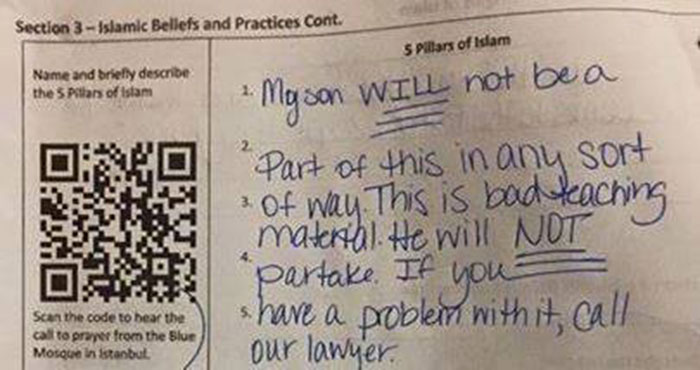 When mom reviewed her son’s homework, she refused to let him finish his assignment on Islam and sent an angry message to the teacher. She sparked a controversial debate after posting the story on Facebook. The mother from California was shocked when she learned what her son’s seventh grade teacher had given him. People are now arguing about who’s in the wrong in this issue: is it the mom or the teacher?

Tara Cali of Bakersfield discovered that the entire lesson of her 7th grader’s history textbook was about Islamic beliefs and prayer. It also contained a code in the assignment that her son could scan with his phone to listen to a Muslim prayer. The mom was upset. She considered the lesson as indoctrination, and sent the teacher her reaction.

The mom was outraged and posted a picture of the assignment that she had written in on Facebook. She wrote that she wouldn’t allow her son to be a part of the lesson in any way.

“My son WILL not be a part of this in any sort of way. This is bad teaching material. He will NOT partake, If you have a problem with it, call our lawyer.

The American Civil Liberties Union said that “while it is constitutional for public schools to teach their students about religion, it is not constitutional for them to “advance particular religious beliefs.” The ACLU stated the guidelines to teaching religion in schools.

“The school’s approach to religion is academic, not devotional.”

“The school may strive for student awareness of religions, but should not press for student acceptance of any religion.”

And the specifics about studying versus practicing religion.

“The school may sponsor study about religion, but may not sponsor the practice of religion.”

No single religion can be singled out.

“The school may educate about all religions, but may not promote or denigrate any religion.”

So what do you think? Do you agree with the mother? Who was in the wrong here in your opinion? As always been the case, the answer depends entirely to the person giving the answer.