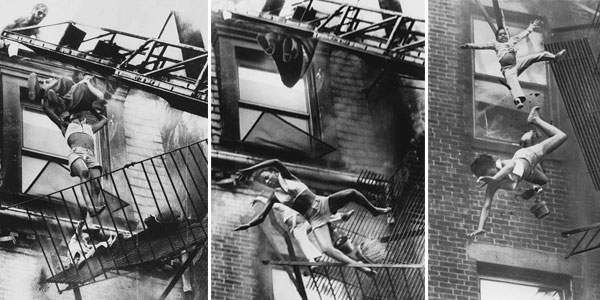 On July 22, 1975 a fire raged in one of the apartment buildings on Marlborough Street in Boston, Massachusetts. 19-year old Diana Bryant and her 2-year-old goddaughter, Tiare Jones were trapped and awaiting rescue on a fire escape.

Firefighter Robert O’Neil was shielding Bryant and Jones from the flames as a ladder approached, ready to lower them to safety. O’Neil would be the first to step onto the ladder and instructed Diana Bryant to pass Tiare Jones to him once he was in place. Robert O’Neil had just begun to pull himself onto the ladder when the fire escape collapsed, taking Diana and Tiare down along with it. 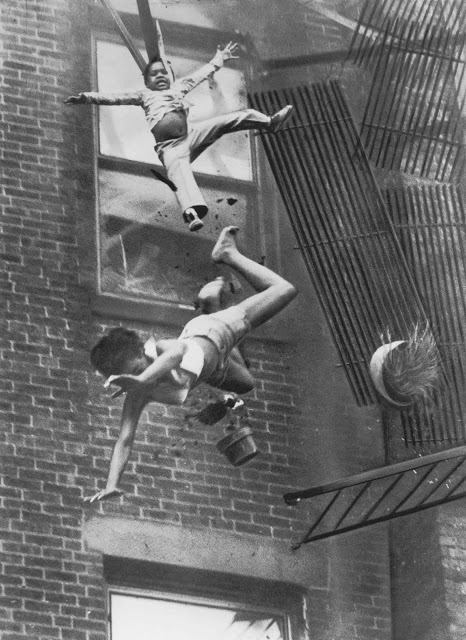 Diana Bryant died from her injuries but Tiare, who had fallen on Diana’a body survived the fall. ‘Fire Escape Collapse’ is one in a series of photos taken by , photographer for the , at the scene of the fire.

When the photo was published in the Boston Herald where Stanley Forman was working as a photographer, there was an overwhelmingly hostile uproar from the public. The photos quickly spread around the world and the media was accused of pandering to sensationalism and invading the privacy of the victims.

Despite the controversy, the photographs bagged the Pulitzer Prize for Spot News Photography in 1976 and was named The World Press Photo of The Year. The photo series of the Fire Escape Collapse also prompted the city of Boston, and many other cities across the U.S., to revise laws on fire escape safety.

In 2005, BBC interviewed photographer Stanley Forman and was asked to give his account of the tragic event:

“It was 22 July 1975. I was about to leave the offices of the Boston Herald for the day. A call came in about a fire in one of the city’s older sections of Victorian row houses. I rushed to the house and followed one of the engines to the fire. I ran to the back of the building, because on the way there they kept yelling for a ladder truck because there were people trapped in the building on the fire escape.

“I ran to the back of the building and when I looked up there was a woman and a child on the fire escape and they were basically leaning at the furthest point from the building because of the heat of the fire behind them.”

Firefighter Bob O’Neil had climbed on to the front of the building on the roof and lowered himself on to the fire escape to rescue them.

“I took a position where I could photograph what I thought was an impending routine rescue. The ladder went up to pick them up – they were about 50ft (15m) up. Mr O’Neill had just told Diana Bryant that he was going to step onto the ladder and asked her to hand the baby to him.”

Bryant and Jones were “basically leaning” at the point farthest from the building because of the heat of the fire behind. 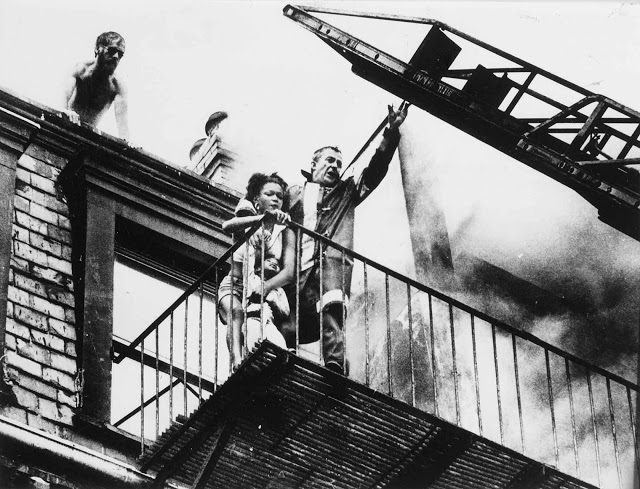 Mr. O’Neil was reaching out for the ladder when suddenly the fire escape gave way.

When the fire escape collapsed… 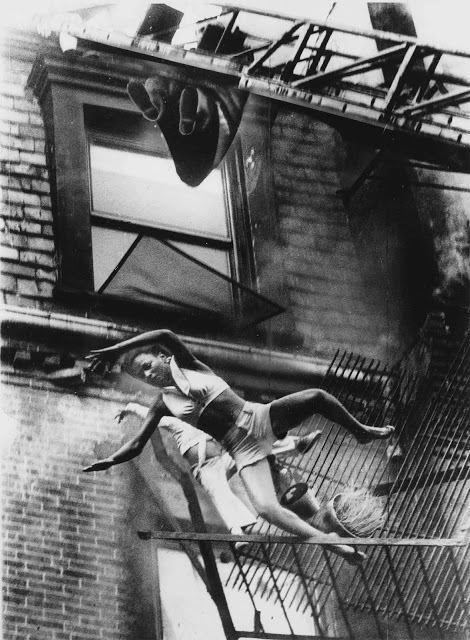 “I was shooting pictures as they were falling – then I turned away. It dawned on me what was happening and I didn’t want to see them hit the ground. I can still remember turning around and shaking.

“It transpired that I wouldn’t have seen them hit the ground as they fell behind a fence where the bins were. When I did turn around I didn’t see them but I saw the firefighter still clinging onto the ladder with one arm, like a monkey, with all his gear. He hoisted himself back up the fire escape to safety.”

The tillerman of the first fire engine to arrive at the scene, Robert O’Neill, asked Bryant to lift the toddler Jones to him on the roof, but Bryant was unable to do so and O’Neill jumped down to help before the ladder could reach them.. 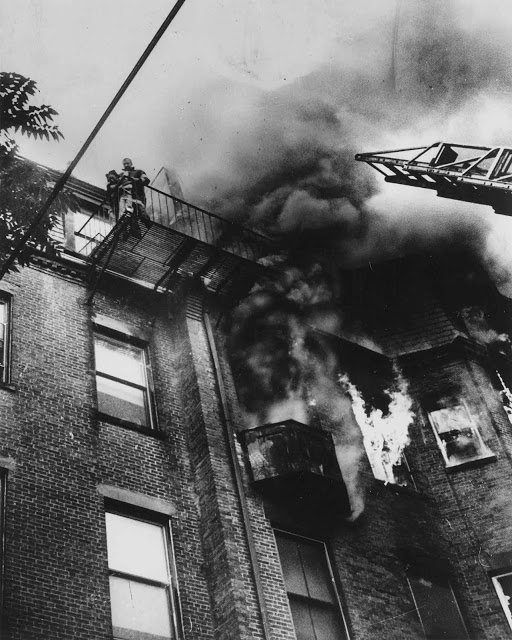 They say the woman broke the child’s fall. The woman died later that night.

“At the time, I didn’t know that the picture was going to be so big or have such an impact. When I started looking at the negatives I was looking at the rescue picture, where they were holding on to each other. I didn’t even look at the next frame, I didn’t know exactly what I’d got. I knew I had shot them coming down, I didn’t realize how dramatic it was until I had developed the film.”

2-year-old Jones survived the fall as she had landed on Bryant’s body, softening the impact. 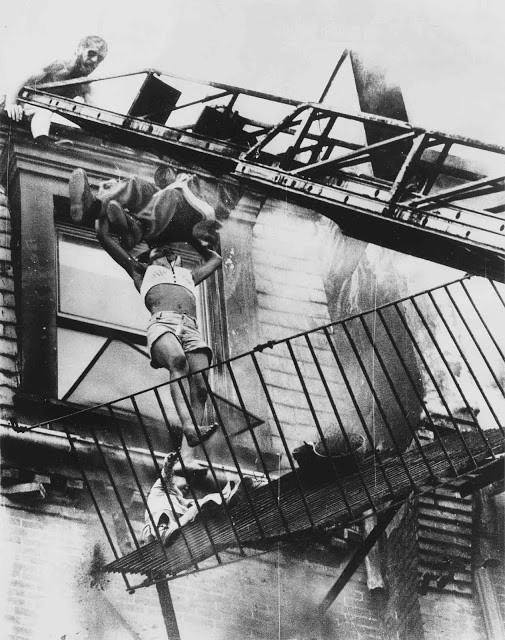 When the picture published in the Boston Herald, there was much debate about showing such a horrific picture.

“I was never bothered by the controversy. When you think about it, I don’t think it was that horrific. The woman at the time was not deceased; we didn’t show a dead person on the front page. She did die, which is a horrible thing. I didn’t think it was that bad, but then I am the photographer, so I’m biased.”

The baby survived because she landed on the woman’s body. 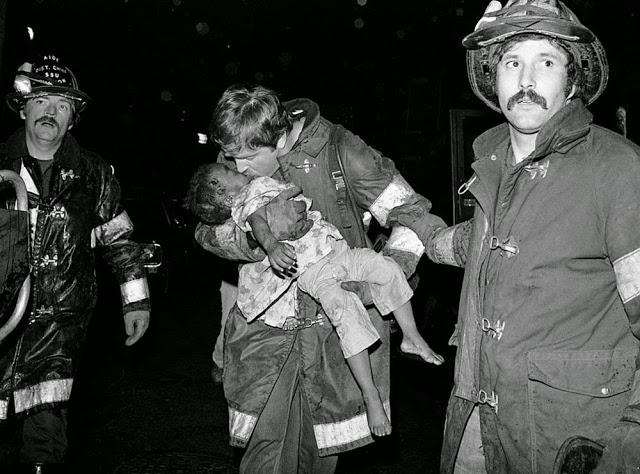 “My photograph prompted people to go out and check their fire escapes and ushered in a law that meant that the owner of the property is responsible for fire-escape safety. It was also used in many fire-safety pamphlets for many years.