Drais patented his design in 1818, which was the first commercially successful 2-wheeled, steerable, human-propelled machine, commonly called a velocipede, and nicknamed hobby-horse or dandy horse.

The first design was initially manufactured in Germany and France. Hans-Erhard Lessing found from circumstantial evidence that Drais’ interest in finding an alternative to the horse was the starvation and death of horses caused by crop failure in 1816, the Year Without a Summer following the volcanic eruption of Tambora in 1815.

On his first reported ride from Mannheim on June 12, 1817, Drais covered 13 km (eight miles) in less than an hour.

Constructed almost entirely of wood, the Laufmaschine or Draisine in English weighed 22 kg (48 pounds), had brass bushings within the wheel bearings, iron shod wheels, a rear-wheel brake and 152 mm (6 inches) of trail of the front-wheel for a self-centering caster effect.

The original design inspired mechanically-minded men and innovators to improve the design and several thousand copies were built and used, primarily in Western Europe and in North America.

But its popularity rapidly faded when, partly due to increasing numbers of accidents. Some city authorities began to prohibit its use. Eventually, better, more balanced designs, and safety features were added that made the evolving bicycles became more popular again.

There were various forms of ‘pedamotive carriage’ or velocipede during the 19th century. It was an early form of bicycle which was propelled forward by the rider pedalling cranks fixed to the front wheel(s). Interest in velocipedes dropped after the introduction of the bicycle in the form we know it today, which was both cheaper and less cumbersome. 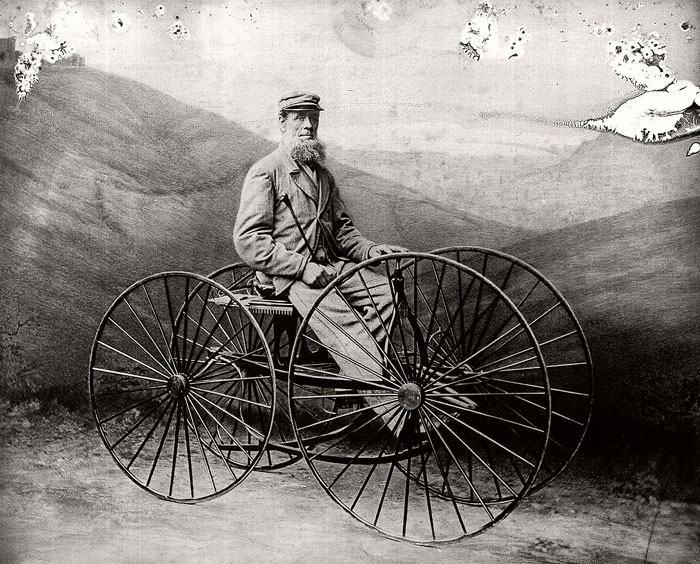 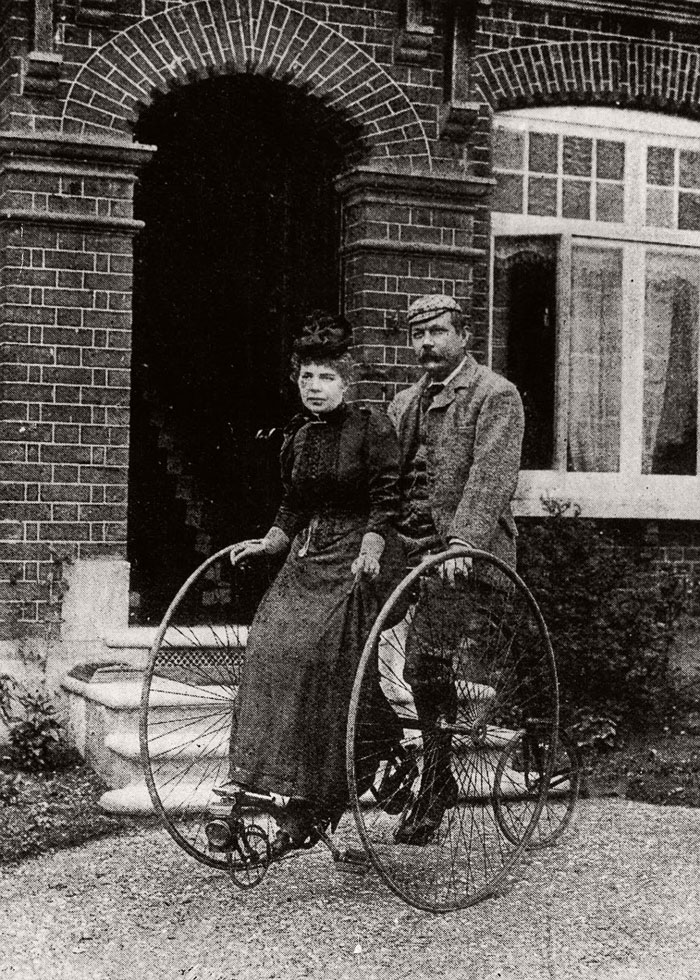 Men ride penny-farthings down the steps of the United States capitol building, 1895 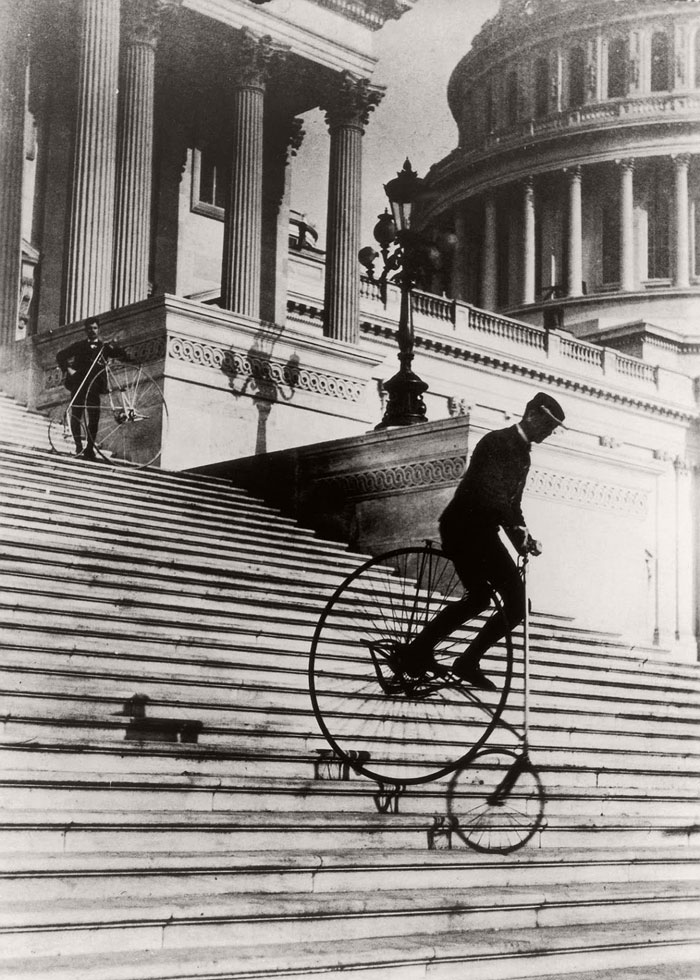 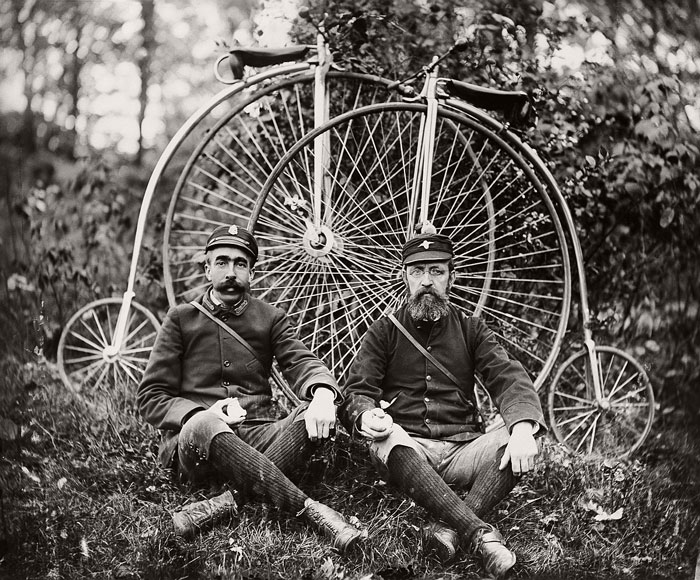 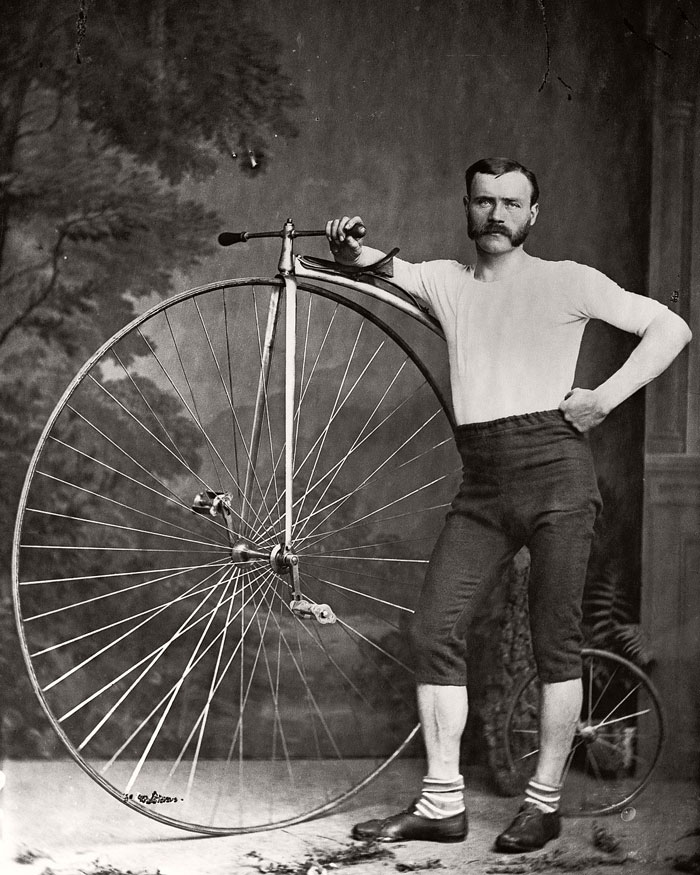 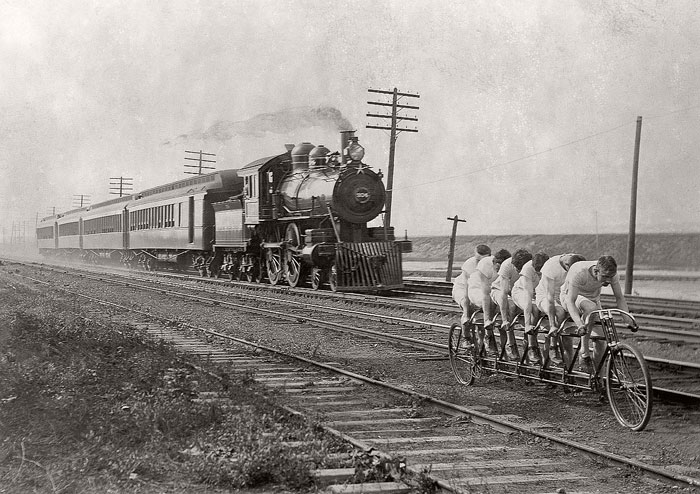 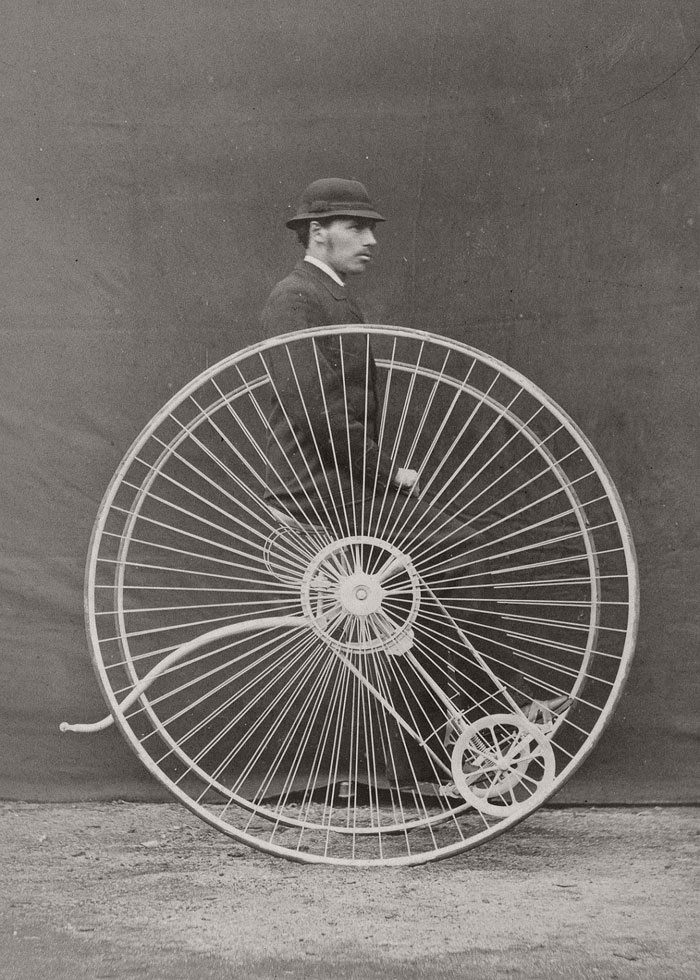 IRELAND – 1888: John Boyd Dunlop, a Scottish inventor, re-built the tires of a tricycle in 1887 for his 10-year-old son. The invention included a tire tube made of a rubber surrounding an envelope of fabric, which was inflated with an air pump. By 1888, Dunlop patented what was the first practical pneumatic tire which formed the foundation for the Dunlop Tire Company and was the beginning of the modern tire industry. 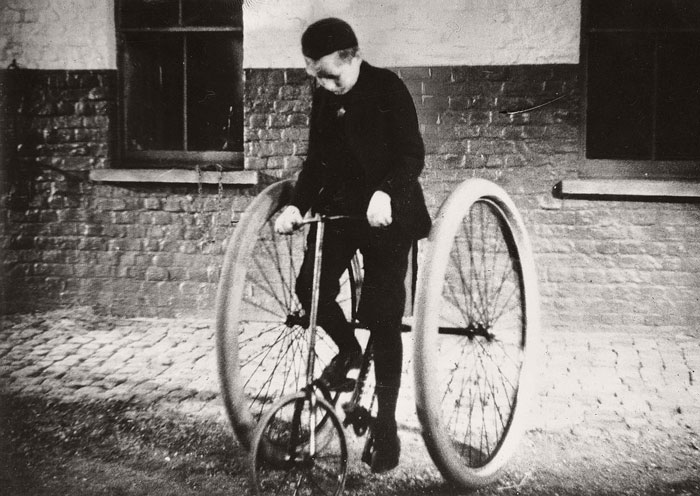 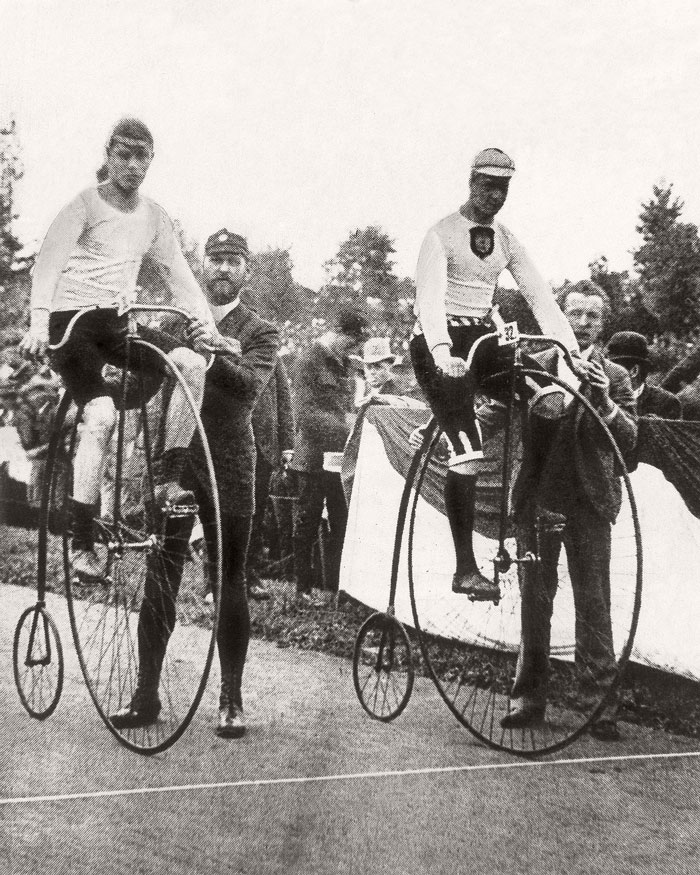 1890: A cycle-race at a stadium in New York. The pneumatic tyre had not yet come into use in the US. Another peculiarity of the race was the type of bicycle, which had already been superseded in England. 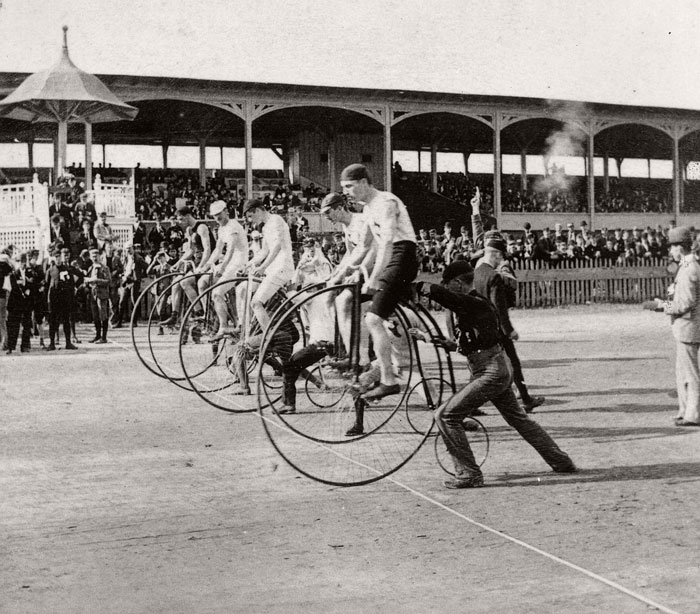 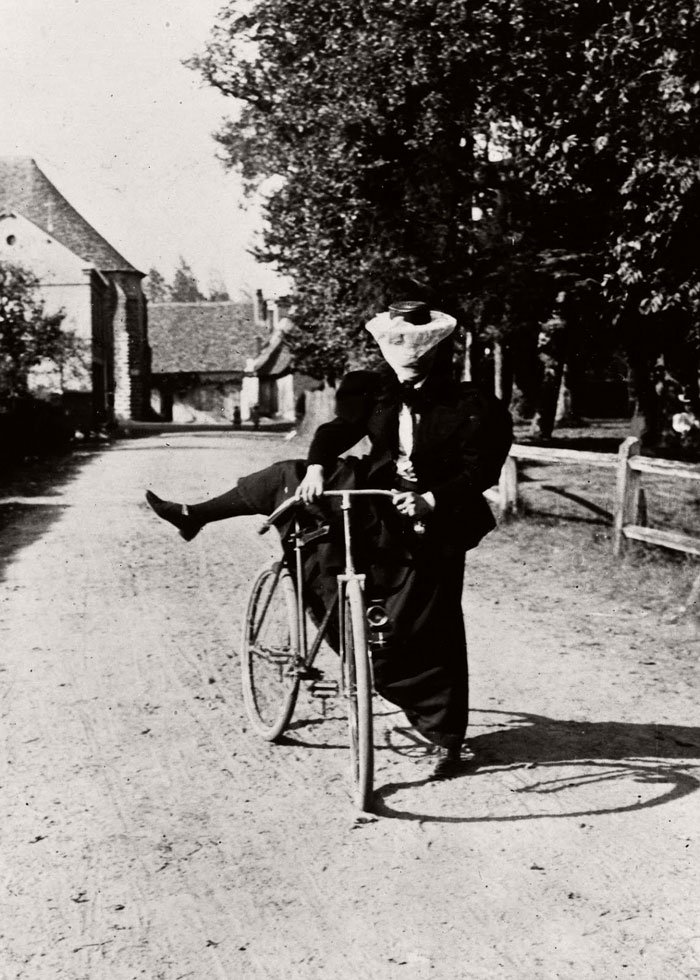 Victorian cyclists perform a balancing act on a penny-farthing, 1891. 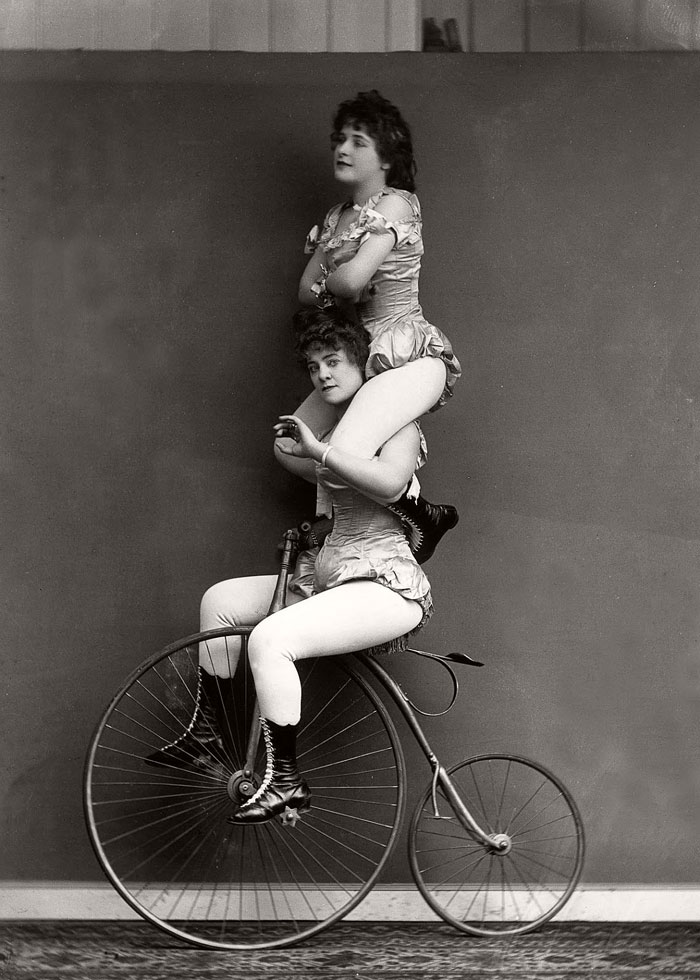 Photograph from an album of prints collected by English motorist, motor car manufacturer and aviator, Charles Stewart Rolls (1877-1910). Rolls is pictured riding a tandem with his friend Legard whilst they were students at Cambridge University, where Rolls gained a BA and an MA in engineering. He founded Rolls-Royce Ltd in 1906 with Sir Frederick Henry Royce (1863-1933), creating one of the most famous motoring companies in the world. Rolls was a keen aviator, making the first non-stop double crossing of the English Channel by aeroplane. He was killed in 1910 when his plane crashed at the Bournemouth Air Show. 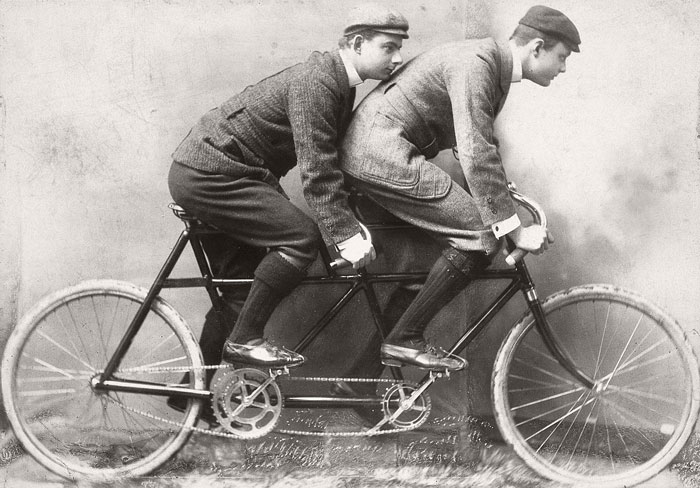 Photograph showing seven Frenchmen on a seven-seater bicycle, taken from an album of pictures collected by Charles Stewart Rolls (1877-1910), English motor car manufacturer and aviator. Rolls founded Rolls-Royce Ltd with Frederick Henry Royce (1863-1933) in 1906, creating one of the world’s most famous motoring companies. He was a well known and successful competitor in motor races of the time, and was also a keen aviator, becoming the first person to make a non-stop double crossing of the English Channel in a aeroplane. He was killed in 1910 when his plane crashed at the Bournemouth Air Show. 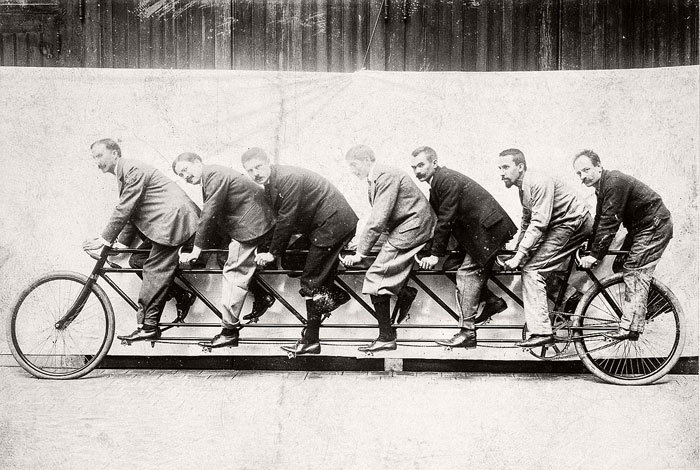