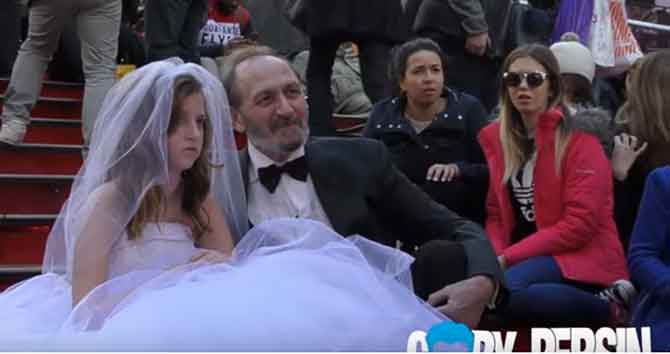 “Every day 33,000 girls are married as children, denied their rights to education and opportunity, and robbed of their childhood,” captioned at the end of this video. Most people in America think this is something that only happens to girls in other countries. They could never imagine happening it here.

But did you know that kids as young as 12 can actually marry a much older partner in a few states? To call attention to this sick reality of child marriage in America and other countries, YouTube star Coby Persin is back to set up a social experiment in New York City. Persin orchestrated a disturbing scene in Times Square for a 65-year-old man and his child bride.

At first, when people saw them, they’re confused. Others were disgusted. It doesn’t take long for other passers-by to react and jump in to help the girl. Watch the social experiment below, and if you want to help bring more awareness to this issue, SHARE this video to your friends on Facebook.