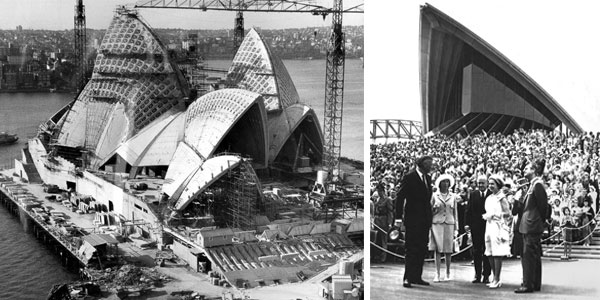 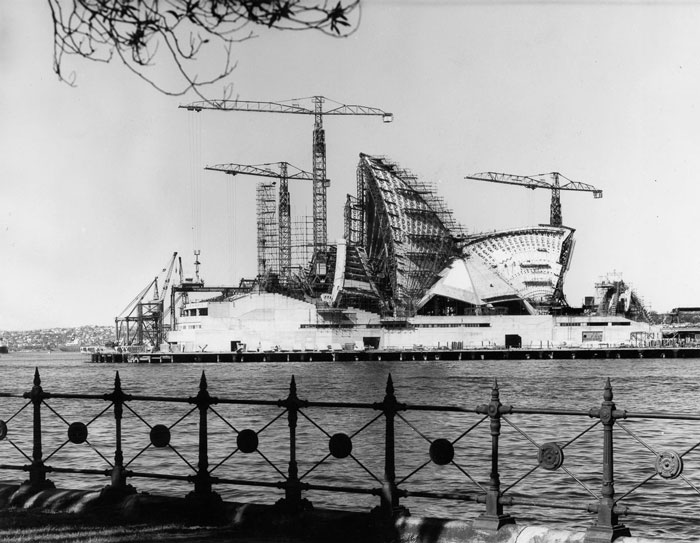 The tram shed at Bennelong Point Circular Quay before the Sydney Opera House was built. (1952) 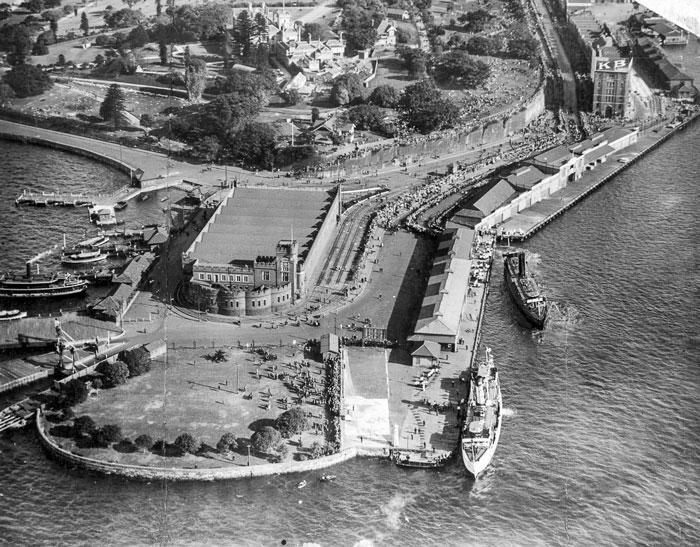 The goal: a multi-purpose venue with a hall large enough for 3,000 people, and a smaller hall for 1,200. New South Wales Premier Joseph Cahill opened the design competition for a Syndey opera, ballet and lecture house in 1955.

The international competition attracted 233 entries — only the question of cost was not considered.

Danish architect Jørn Utzon was announced as the winner. (His designs were reputedly rescued from a pile of rejected submissions.)

Utzon’s innovative, modern plan was based on the Expressionist movement, a utopian form of architecture which flowered in post-WWI Germany. The now-famous roof featured precast concrete panels loosely referred to as “shells,” covered by ceramic tiles. But as Utzon had not specified the precise shape, the suggested methods for casting them proved problematic. 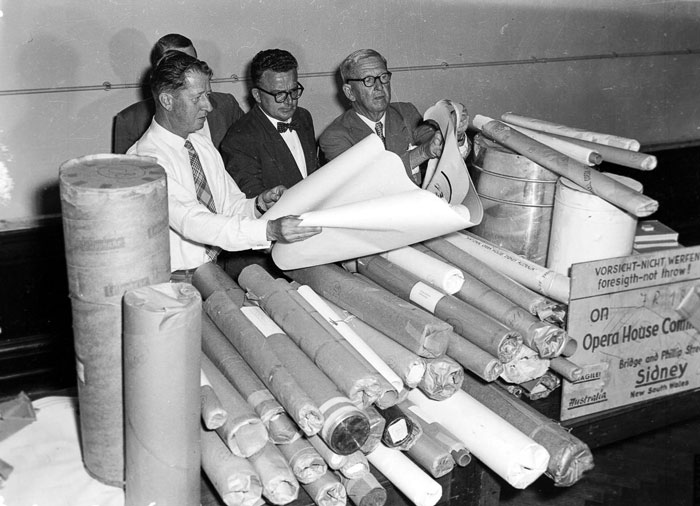 “The drawings submitted for this scheme are simple to the point of being diagrammatic. Nevertheless we are convinced they present a concept capable of becoming one of the great buildings of the world.” — ASSESSORS’ REPORT, JANUARY 1957

The tram shed at Bennelong Point is demolished to make way for the construction of the Opera House. (Dec. 30, 1958) 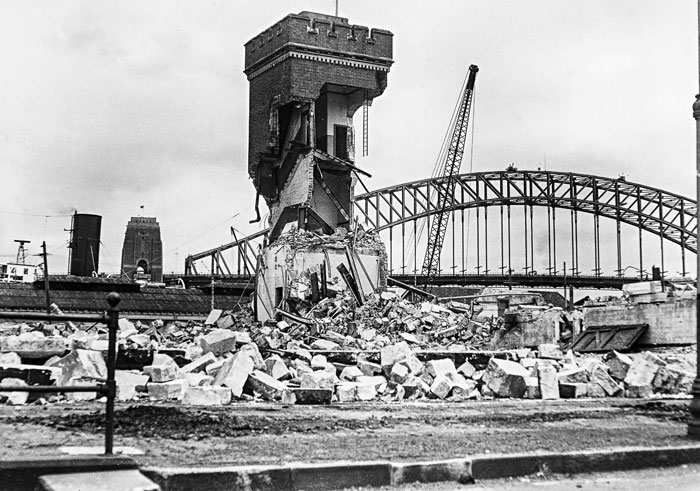 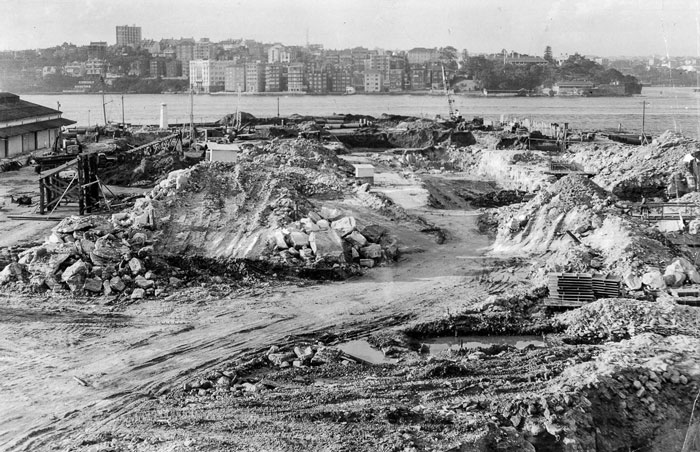 Tradesmen working on the construction of the Sydney Opera House live in caravans on-site at Bennelong Point. (June 20, 1960) 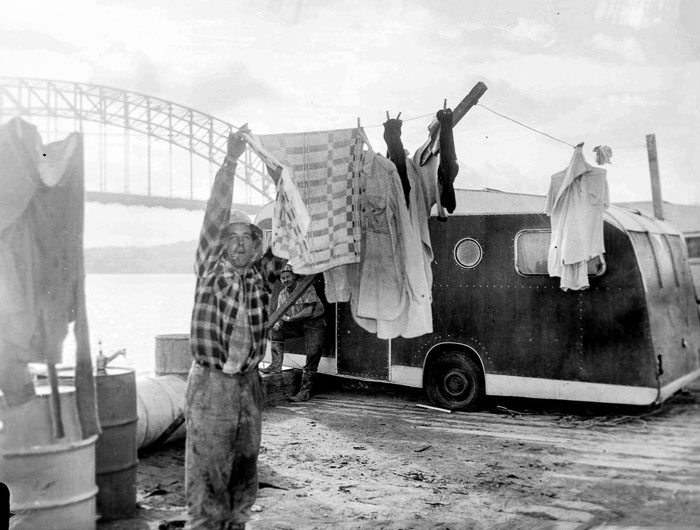 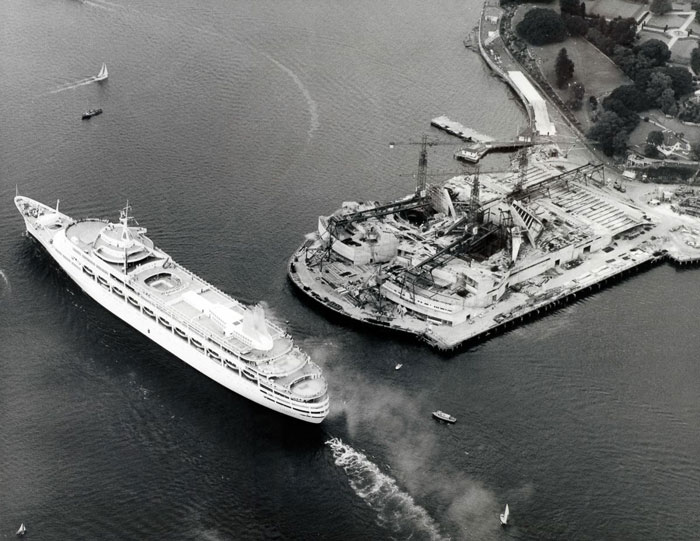 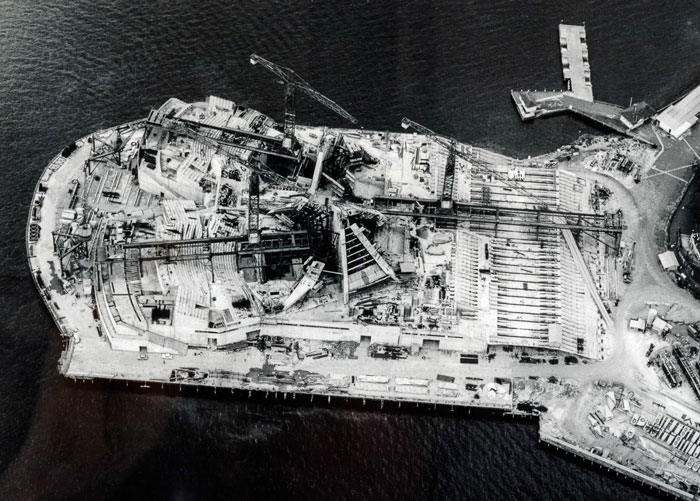 “The Opera House could become the world’s foremost contemporary masterpiece if Utzon is given his head.” — OVE ARUP, ENGINEER 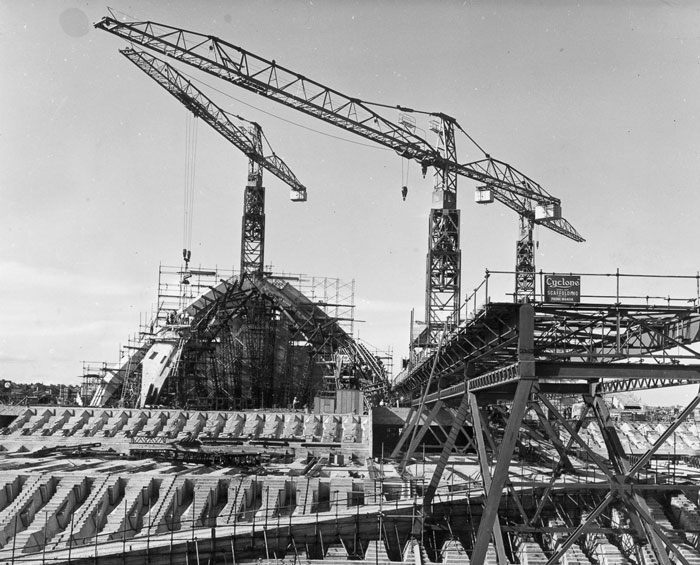 Architect Jørn Utzon in front of the Sydney Opera House, eight years after his designed was selected and six years into construction. (1965) 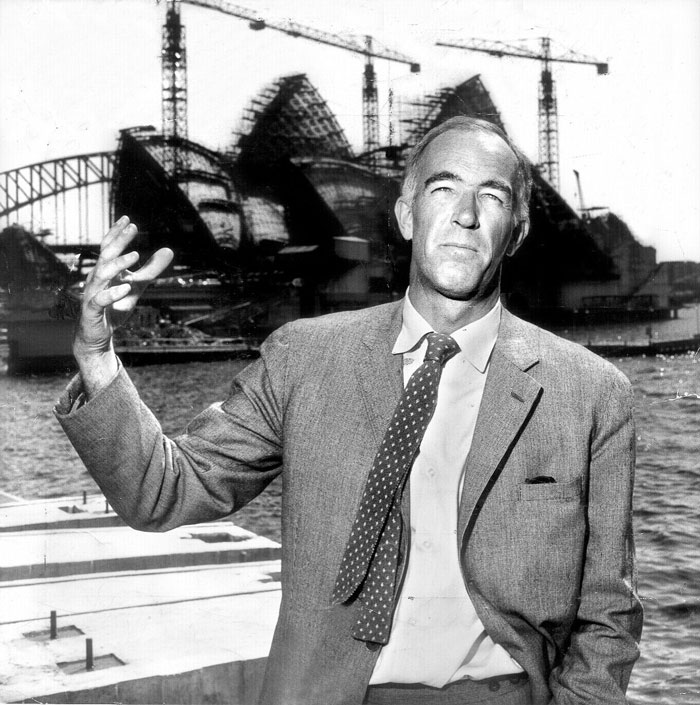 As the project proceeded, tensions grew. After the government rushed into the project to retain funds, it elected Robert Askin in 1965, a prominent critic of the opera house, as new Premier of New South Wales.

It didn’t help that the venue’s financial burden was growing. Several late modifications to the layout added to already ballooning costs.

Fed up with the new government’s lack of cooperation and unable to pay his staff, Utzon resigned from the project in 1966. There were demonstrations calling for his restoration, but another architect, Peter Hall, took over. 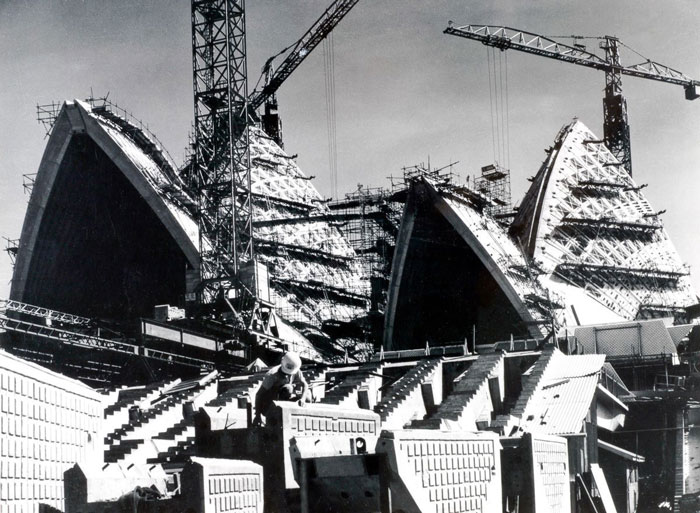 “His concept was so daring that he himself could solve its problems only step by step.” — SYDNEY MORNING HERALD, MARCH 17, 1966

Students protest and march from Sydney Opera House to Parliament House in Sydney after the resignation of architect Jørn Utzon. (March 3, 1966) 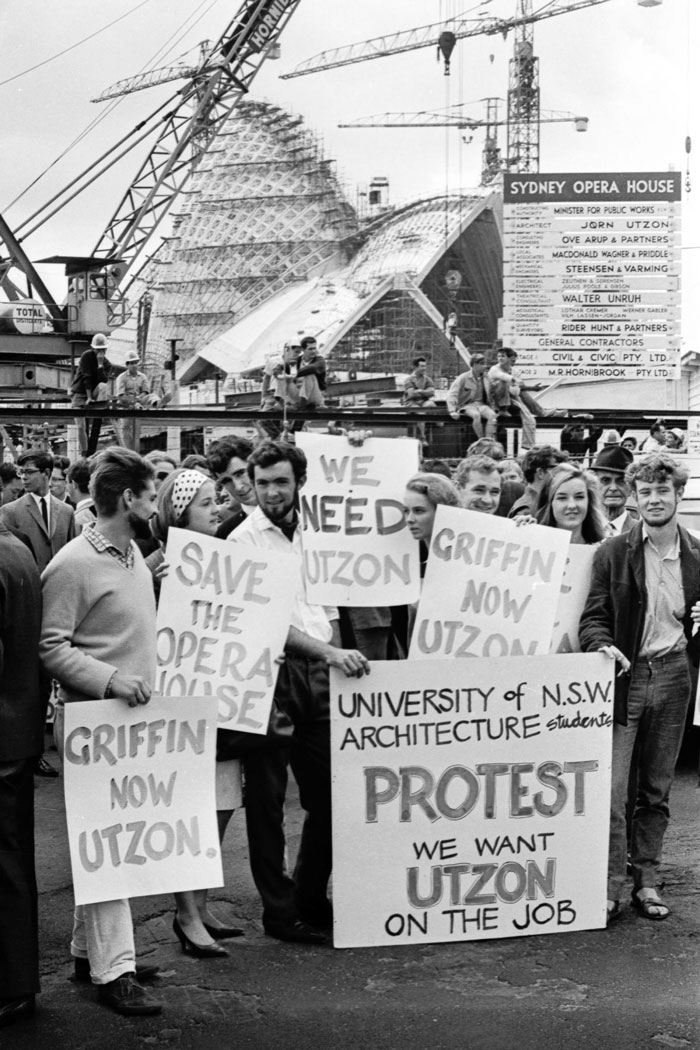 Architect Jørn Utzon after a press conference with a scale model of the Sydney Opera House. (March 8, 1966) 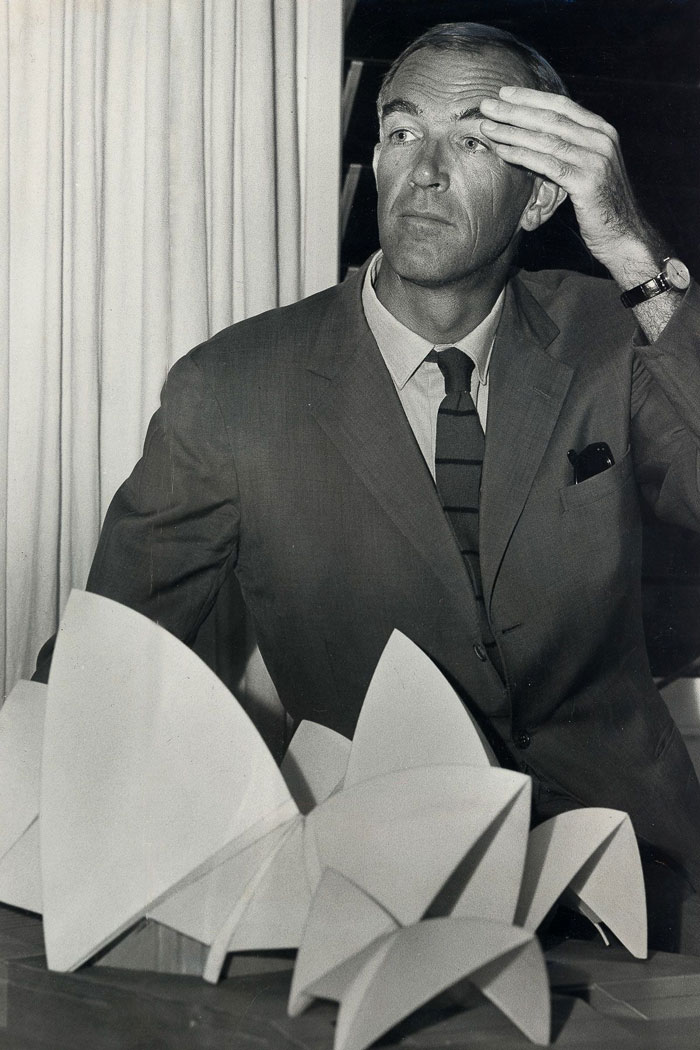 While the exterior of the Opera House was mostly completed in 1966, the interiors had to be significantly redesigned after Utzon’s resignation. (Oct. 22, 1966) 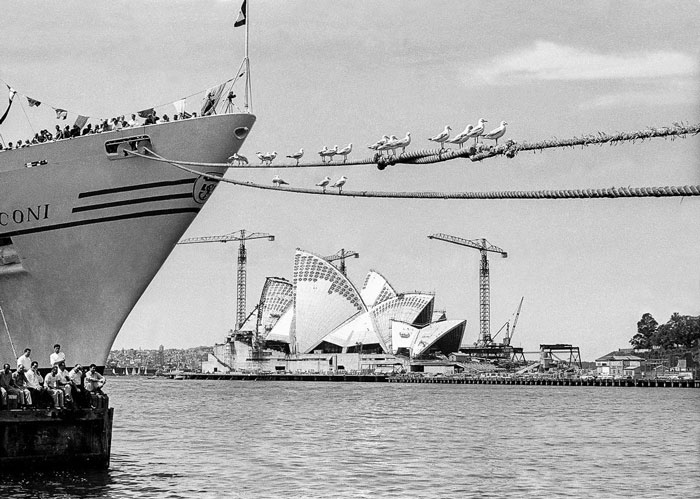 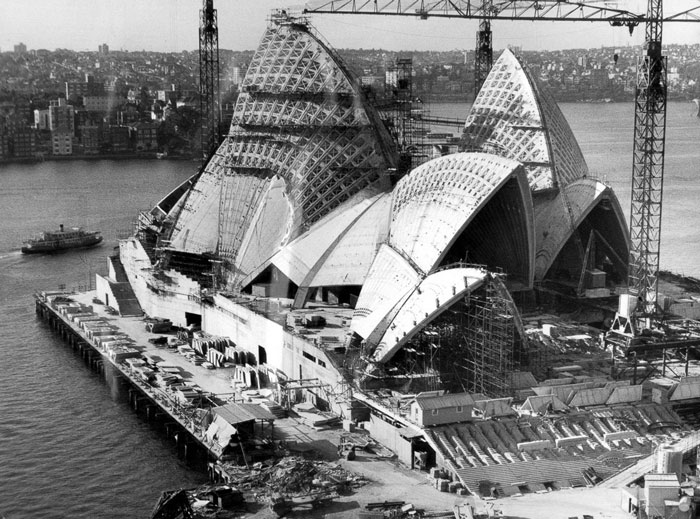 Part of the shells which form the roof of the Sydney Opera House, still under construction after 10 years of work. (January 1968) 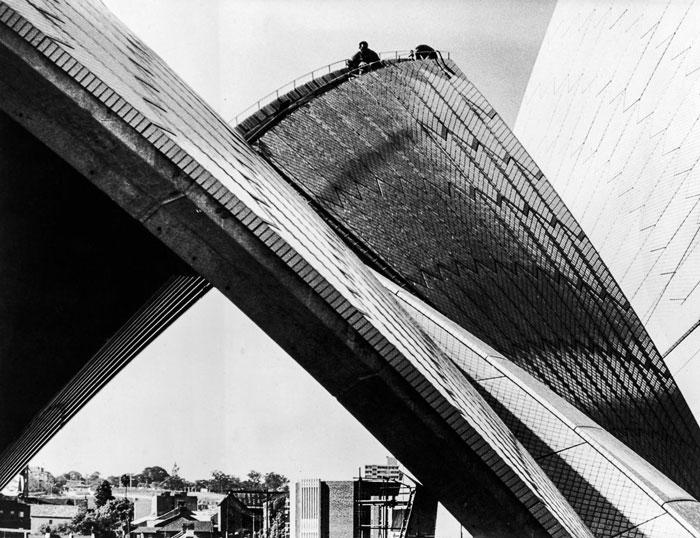 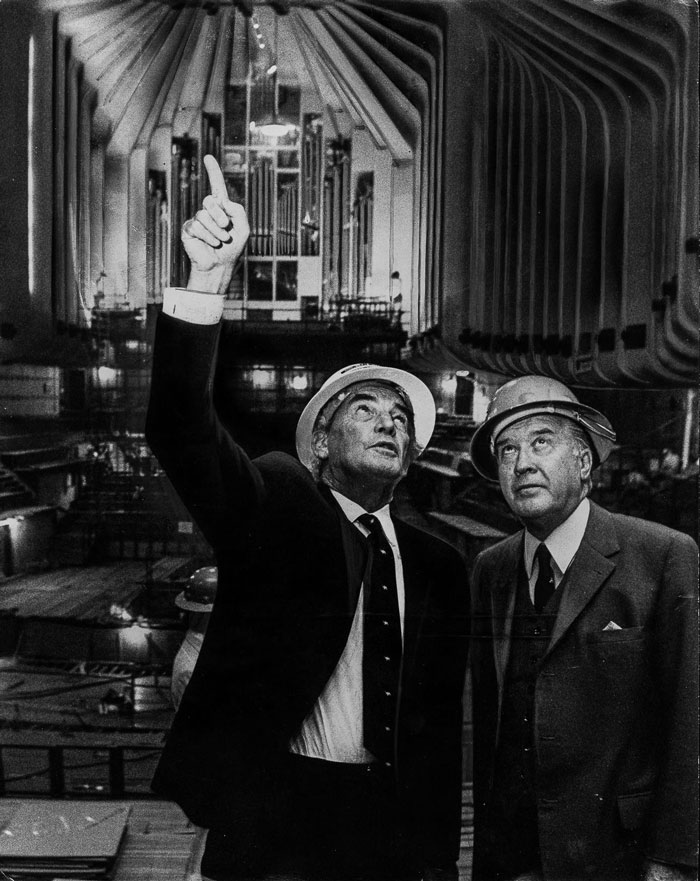 Ten years late and an estimated 1,457% over budget, the project was completed. The Opera house was formally opened by Queen Elizabeth II on Oct. 20, 1973.

Utzon was not invited, and his name was not mentioned.

The Australian government initiated contact with Utzon in the late 1990s, and in 1999 he was made a design consultant overseeing future developments, refurbishing the reception area of the Opera House. It was renamed the Utzon Room in his honor in 2004. Despite this, he never returned to Australia.

Awards came later in life. Utzon was made a Companion of the Order of Australia, awarded an honorary doctorate by the University of Sydney and the keys to the city of Sydney. In 2003 he received the Pritzker Architecture Prize, a top honor for architecture.

Sir Roden and Lady Cutler, and Sir Robert and Lady Askin with Queen Elizabeth II and the Duke of Edinburgh at the opening of the Opera House. (Oct. 20, 1973) 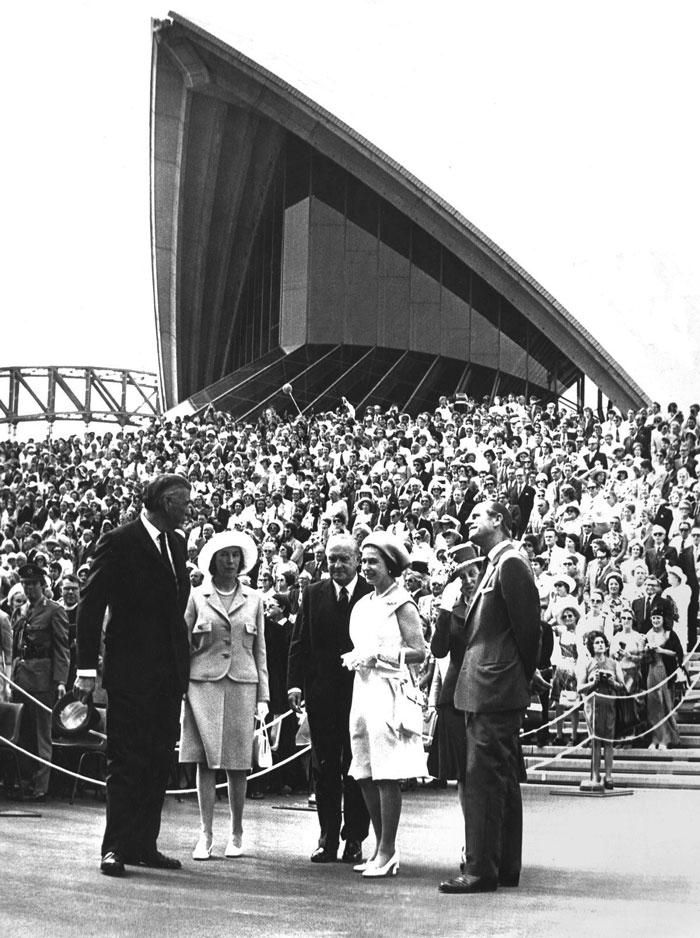 “There is no doubt that the Sydney Opera House is his masterpiece. It is one of the great iconic buildings of the 20th century, an image of great beauty that has become known throughout the world – a symbol for not only a city, but a whole country and continent.” — Pritker Prize Citation, 2003 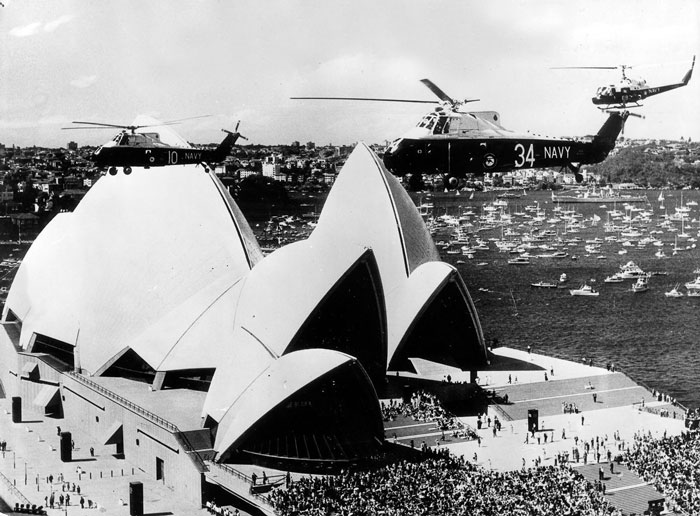