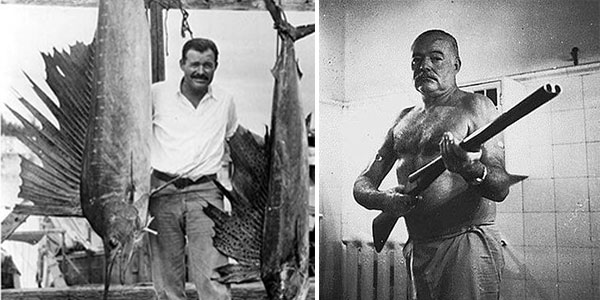 “Every man’s life ends the same way,” Ernest Hemingway wrote. “It is only the details of how he lived and how he died that distinguish one man from another.”

Below are some of the interesting facts about the great writer Ernest Hemingway:

He wanted to fight in the First World War, but was denied due to his poor eye sight. But he convinced the military to make him an ambulance driver instead. He wanted to be as closer as he could to the front line, which was the reason he was wounded from mortar fire.

One of the popular stories about Hemingway was his betting with fellow writers that he could write a short story in just six words. The tale goes that Hemingway gave them: “For Sale: baby shoes. Never worn.” He won the bet.

Hemingway received a ten-page letter from F. Scott Fitzgerald advising him that he should end his novel A Farewell to Arms with the passage: “The world breaks everyone and afterward many are strong at the broken places. But those that will not break it kills. It kills the very good and the very gentle and the very brave impartially. If you are none of these you can be sure that it will kill you too but there will be no special hurry.” Hemingway replied with three words: “Kiss my ass.”

The writer once stole a urinal from a bar saying that he had “pissed away” enough money into it that he should own it. Hemingway ended up sticking the urinal in his house.

Ernest once published a recipe for apple pie in his column. Actually, he had a lot of food recipes. Some of them even ended up in museums like his hamburger recipe.

In the 1940s, Hemingway was suspected to work with the Soviet KGB under the name “Argo.” The FBI under Edgar Hoover spied on him for much of his later life. His close friends said that this added more pressure and deepened his depression.

After World War II, he was accused of War Crimes by Geneva based on an incident where Hemingway led a group of French Militia against the Nazis. He was not convicted.

Hemingway was checked in to the Mayo Clinic in Minnesota under the name Saviers, and the media believed he was being treated for hypertension.

During his life, Hemingway survived the First and Second World War and two plane crashes. He lived through diabetes, a ruptured kidney, hepatitis, a ruptured spleen, a fractured skull, and a crushed vertebra. He also survived exposure to anthrax, malaria, skin cancer, and pneumonia.

Pictured below is Ernest Hemingway on his 60th birthday. His death was found to be self-inflicted, but the newspapers called it “accidental.” Five years later, his wife Mary publicly disclosed that the cause of death was suicide.

This is Ernest Hemingway with his rifle. Ernest killed himself with his favorite shotgun, purchased from Abercrombie & Fitch.