According to sociologists, there is an overreaching tendency towards a decrease in violence levels enjoyed worldwide. Over the last decades, people have been killing and assaulting each other less than they used to. You might get the opposite impression even after a single criminal newscast, but you cannot argue with numbers. What does this mean for us, regular people? Can we finally breathe a sigh of relief and walk the streets and even dark alleys without fearing for our lives? No, we cannot. The tendency is not an absolute rule, and less doesn’t mean no. As we all know, there are cities known for their high crime levels, and even if those might have dropped, crime rates are nonetheless excessive. There will also be little comfort in understanding that violent crimes are committed less often if you become a victim of such crime. Tendencies help those who help themselves, so don’t rely on chance, and be ready to protect yourself should this bane strike you.

Why does this guide have the word “gear” in it? We won’t cover any self-defense techniques or behavior strategies that could help you in a situation like an assault. They are still useful and may be helpful in some scenarios, but there is one thing about them. Assailants never behave the way they are depicted when practicing self-defense techniques, and you never have enough time, space, or strength to do the maneuver. It takes years and years of training to make yourself do those things reflexively without even thinking about what to do. In all other cases, assaults are highly stressful situations, and you will inevitably get everything mixed up in your head. We offer you a more reliable and simple way to secure chances of making it without unnecessary losses. Self-defense gear will do everything for you. The only thing you need to do is activate it. Pressing a button is much simpler than recalling which stance you need to take if an attacker grapples you from behind. Our gun store compiled a list of products to help you choose a tool to neutralize the assailant. 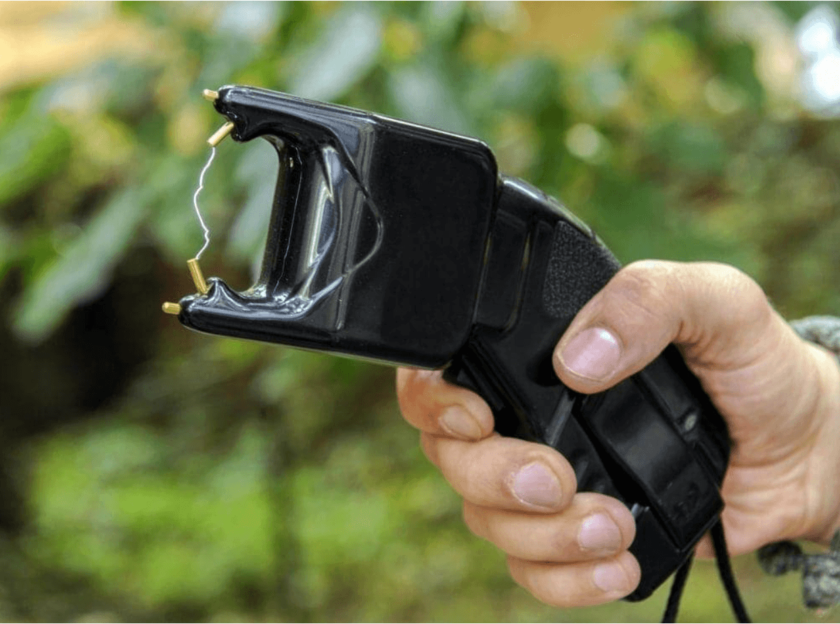 You don’t need to carry firearms to be able to protect yourself from an attacker. Though seeing something as impressive and intimidating as a ready-to-shoot .380 ACP might make an unprepared assailant flee, it might very well have the opposite effect. Besides, training quick draw and precision shooting requires a lot of time, and we’ve just promised to give you a list of things you can use quickly without much prep. Stun guns are small self-defense devices that don’t actually look like guns. They may take any shape but usually look like batteries or flashlights. Stun gun’s working principle is simple. When you press the button and hit an oncoming attacker, you activate the stun gun’s internal prongs that send electricity to the body of the attacker, causing them terrible pain. Such a gun is incapable of inflicting permanent damage or scaring, but it can immobilize the enemy and give you the precious opportunity to escape. 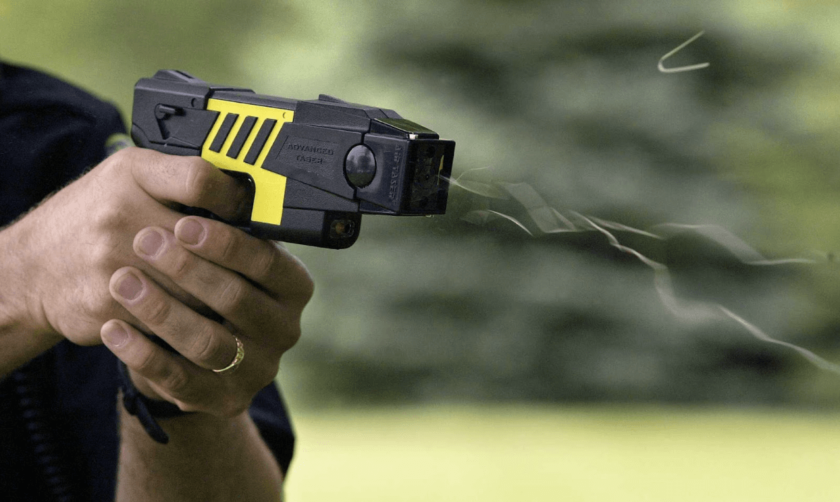 Tasers are quite similar to stun guns both in appearance and functioning principles. They also utilize electricity to draw an opponent immobile. There are several principal differences, though. Stun guns are melee means of self-defense, while tasers are range tools that shoot two prongs at an opponent. Each taser houses a compressed gas cartridge that explodes upon shooting, firing out two wires with prongs at the end. Tasers and stun guns are often compared and sometimes confused. To avoid this confusion and give you a better idea of what you acquire, we’ve compiled a list of each tool’s peculiarities.

Tasers are range self-defense tools that are effective at a distance of up to fifteen feet. It goes without saying that the ability to immobilize an opponent even before they come close is quite useful. Tasers also feature laser sights that assist you with aiming while making you look cool and maybe even intimidating. They also look like guns, which only increases the chances of the attacker thinking twice before making the next step. One can’t tell the difference between the two and will think you are armed with a real gun. The last peculiarity is the taser’s effectiveness. Instead of making the shootee feel pain, a taser pumps electricity into their muscles, causing them to contract and paralyzing the target. They are particularly useful against highly intoxicated attackers and people with high pain tolerances, who are less susceptible to pain. There is one major drawback from which tasers suffer. They are one-shots, so if your shot is a miss, there is nothing else these things can give you. You can reload them afterward, but you first need to live up to afterward.

Stun guns can’t boast the range of tasers, but they are nonetheless viable self-defense options. Stun guns are easily concealable, very compact, and inexpensive. They are smaller than tasers and can be easily stored in a pocket. You also have several tries should your first one prove unsuccessful. They won’t help you if you have a pistol pointed at you but are of great assistance when you are physically assaulted. 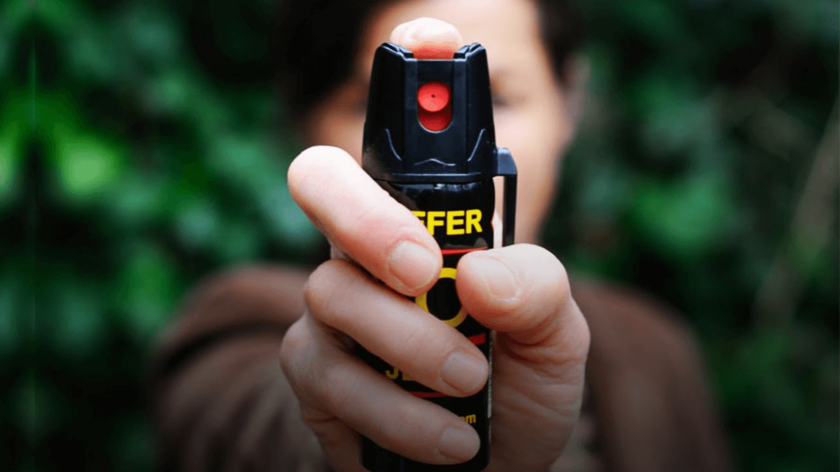 A paper spray was initially designed for protection against bears, mountain lions, wolves, and other dangerous predators. With time, police began using it for riot and crowd control and eventually legalized it for self-defense. The canister contains a natural extract found in hot chili peppers. Once in contact with the throat, skin, or eyes, it produces an intense burning sensation that incapacitates the opponent. Since this substance needs to get in contact with soft tissues to be effective, it won’t cause much disturbance if sprayed on clothes. However, pepper sprays can shoot the agent as far as 12 feet, and even a small portion of it is enough to get the assailant rolling on the floor.

A pepper spray is often called a mace spray, and while the two were initially different substances, they are often used interchangeably. Mace is a brand that produced sprays with an irritant agent that was somewhat weaker and easier to get rid of than pepper spray. Its effect was comparable to tear gas, but when tear gas became a restricted substance, the brand switched its focus to pepper sprays.

Pepper sprays come in many forms, be it full-fledged canisters or compact keychain designs. Though you’ll need a bit of dexterity to shoot the spray in the attacker’s face, it shouldn’t be too complicated. 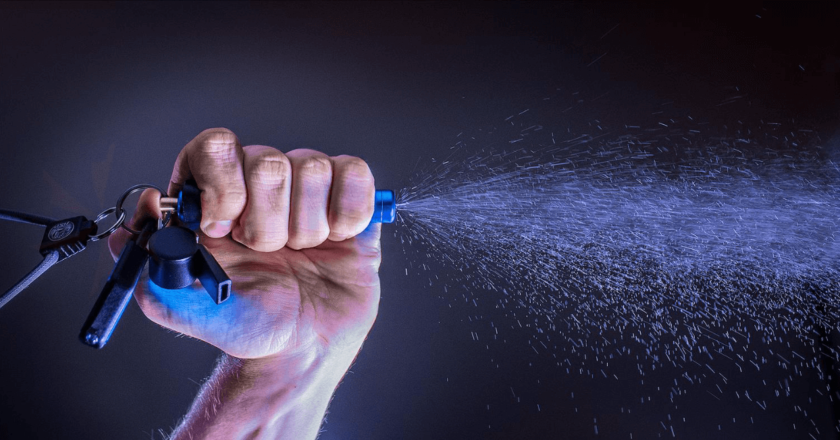 A self-defense keychain is quite a broad term. Some people use it to describe all the weapons for self-defense that can be attached to a keychain, while others imagine stakes and knuckles that look like regular trinkets. There are also 3-in-1 self-defense tools featuring key fob designs that fall into the same group. They are usually a combination of a stun gun or pepper spray, a personal alarm, and a flashlight. The obvious benefit of such tools is their compactness. They are made not too cumbersome to look natural on your keychain and are several things at once. And they are always there with you unless you leave your keys home.