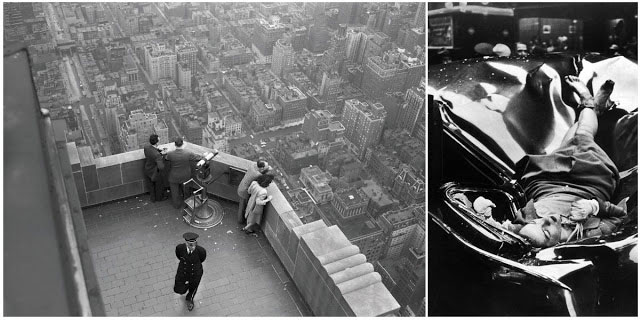 Evelyn McHale was an American bookkeeper who killed herself by jumping from the 86th floor Observation Deck of the Empire State Building on May 1, 1947. A photograph taken four minutes after her death by photography student Robert Wiles has become an iconic suicide photograph, referred to as “the most beautiful suicide”. This detail from a photo by Robert C. Wiles was published as the “Picture of the Week” in the 12 May 1947 issue of LIFE Magazine. It ran with the caption: “At the bottom of the Empire State Building the body of Evelyn McHale reposes calmly in grotesque bier, her falling body punched into the top of a car.”

Evelyn, still clutching a pearl necklace, looks disarmingly placid and composed – as if simply asleep. Around her, however, the broken glass and crumpled sheet metal of a car roof shows how brutally destructive her 1040 ft jump was.

“Some 60 years later the photo remains as haunting and affecting as when it was first published,” says Terry Stone, an editor from BuyEssayClub company.

“The most beautiful suicide” – Photo of Evelyn McHale after her suicide leap from the Empire State Building, 1947. Evelyn Francis McHale was born 20 Sept 1923 in Berkeley, California. She was the sixth child (of seven) of Vincent and Helen McHale.

Around 1930 Vincent accepted a position of Federal Land Bank Examiner and the family moved to Washington, D.C. Shortly thereafter Helen left the family for unknown reasons (although, apparently, they were due to her mental illness). They were divorced and Vincent took custody of the children. Later he moved the family to Tuckahoe, New York were Evelyn attended high school. Helen returned home to California.

After high school Evelyn joined the Women’s Army Corps and was stationed in Jefferson, Missouri. It was reported that after her service she burned her uniform.

After the War Evelyn moved to Baldwin, New York to live with her brother and sister-in-law and took a job as a bookkeeper with an engraving company.3 It was here that she became engaged to Barry Rhodes, an ex-GI studying at Lafayette College in Easton, Pennsylvania. They had intended to be married at Barry’s brothers house in Troy, New York in June 1947. On 30 Apr she visited her fiancé in Easton presumably to celebrate his 24th birthday and boarded a train back to NYC at 7 am, 1 May 1947. Barry later stated to reporters that “When I kissed her goodbye she was happy and as normal as any girl about to be married.”

Of course we’ll never know what went through Evelyn’s mind on 66-mile train ride home, but after she arrived at Penn Station around 9 am she went across the street to the Governor Clinton Hotel where she wrote a suicide note then walked two blocks east where, shortly before 10:30 am, she bought a ticket to the 86th floor observation deck of the Empire State Building.

22 May 1947. View from the top of the Empire State Building. (Bettmann/CORBIS)

Around 10:40 am Patrolman John Morrissey, directing traffic at 34th Street and Fifth Avenue, noticed a white scarf floating down from the upper floors of the building. Moments later he heard a crash and saw a crowd converge on 34th street.5 Evelyn had stepped out on the parapet, jumped, cleared the setbacks, and landed on the roof of a United Nations Assembly Cadillac limousine parked on 34th street, some 200 ft west of Fifth Ave.6 As one reporter wrote “Forenoon shoppers on Fifth Ave were horrified.”

Across the street, Robert C. Wiles, a student photographer, also noticed the commotion and rushed to the scene where he took his iconic photo some four minutes after her death. Later, on the observation deck, Detective Frank Murray found her tan (or maybe gray, reports differ) cloth coat neatly folded over the observation deck wall, a brown make-up kit filled with family pictures and a black pocketbook with the note to her sister which read:

“I don’t want anyone in or out of my family to see any part of me. Could you destroy my body by cremation? I beg of you and my family – don’t have any service for me or remembrance for me. My fiance asked me to marry him in June. I don’t think I would make a good wife for anybody. He is much better off without me. Tell my father, I have too many of my mother’s tendencies.” Her body was identified by her sister Helen Brenner and, according to her wishes, she was cremated. There is no grave. Her fiancé Barry eventually relocated to Florida. He never married.

After Wiles photograph appeared in LIFE it was widely republished in a number of photography anthologies and became one of the iconic images of the 20th century. It was the only photograph he ever published.